No Islamic State in Jarabulus — Instead, a NATO Occupation

Reports of Turkish forces alongside Western-backed militants crossing into northern Syria and entering the Syrian city of Jarabulus preceded what many expected to be intense clashes with the self-titled "Islamic State." However, there were none. 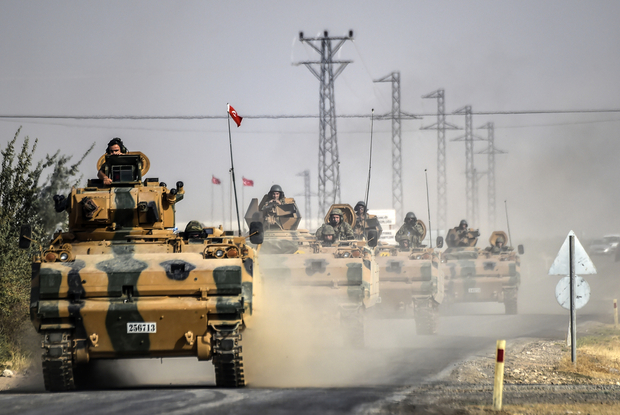 It is alleged that Islamic State militants either surrendered without a fight or fled, an outcome uncharacteristic of years of clashes involving the international designated terrorist organisation. Analysts and even the Turkish foreign minister himself have revealed in recent months that Islamic State militants have been based within Turkish territory for years, reinforcing their positions in Syria both with men and materiel with little to no resistance from the Turkish government.

A May 2016 Washington Times article titled, "Turkey offers joint ops with U.S. forces in Syria, wants Kurds cut out," would reveal (our emphasis):


Joint operations between Washington and Ankara in Manbji, a well-known waypoint for Islamic State fighters, weapons and equipment coming from Turkey bound for Raqqa, would effectively open “a second front” in the ongoing fight to drive the Islamic State, also known as ISIS or ISIL, from Syria’s borders, [Turkish Foreign Minister Mevlut Cavusoglu] said.

Analysts and strategists are likely to point out that if this was the case, according to Turkey's own foreign minister, then why wasn't the fighting capacity of the Islamic State not uprooted at its very source, Turkish territory? The fact that the Islamic State is apparently operating out of Turkey may explain why Turkish forces and accompanying militants were able to move so easily into Jarabulus without a fight.

Islamic State fighters likely didn't "flee" or "surrender," but were instead absorbed by the advancing force.

Now there exists in northern Syria a bastion protected by Turkish forces and by extension of NATO agreements, NATO's entire membership including the United States. As pointed out earlier, this is the fulfilment of longstanding US plans dating back to 2012 involving the establishment of "safe-havens" in northern Syria from which to prolong the fighting and strike deeper into Syrian territory.

However, when these plans were drafted in 2012, Russia and Iran were not so directly involved in the conflict. Turkey also has shifted, if even superficially, from its geopolitical stance four years ago.

Analysts are divided over whether Turkey's advancement into Syrian territory represents the fulfilment of US designs, or something else entirely, possibly even diametrically opposed to those plans. Reactions from Syria and its allies are still forthcoming, and until actions are taken (or not taken) against or with Turkey in regards to its cross-border foray, little can be said for certain

But what can be said for certain is that NATO troops are now occupying an enclave in northern Syria and occupied it with little to no resistance from Islamic State fighters who have bitterly contested every other square meter of Syrian territory they have invaded over the last several years.

The next moves will be critical, proving once and for all which side Turkey has finally come down on, and whether it is bringing Islamic State troops with it if and when it moves south and west deeper into Syrian territory.