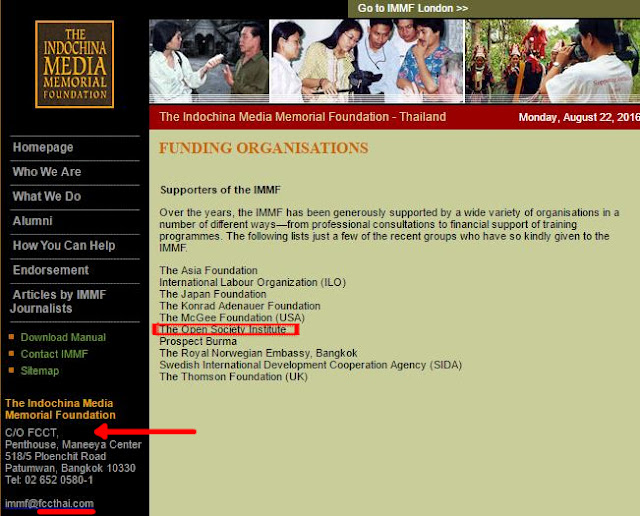 In Thai-based newspaper The Nation's article, "Prachatai denies funding by Soros foundation influences its news coverage," Faulder would deny the FCCT having received any funding from Open Society. The report stated:


The FCCT denied it received financial support from Soros's foundation.

"No financial support from outside at all. We have no financiers, none," said FCCT president Dominic Faulder, who recently assumed the position.

"I have not read the [New Atlas] article but what I'm telling you is it is not true [regarding the FCCT]," he said.

Faulder's claim would be repeated by BBC correspondent and FCCT member Jonathan Head who insisted likewise that the FCCT was not associated with Open Society. However this is unequivocally false.

Jonathan Head would recant his initial denial, partially admitting association with Open Society by citing one seminar jointly conducted by the FCCT and Open Society revealed in the so-called "Soros Leaks," but Head insisted the FCCT received no funding for the "one-off" seminar. 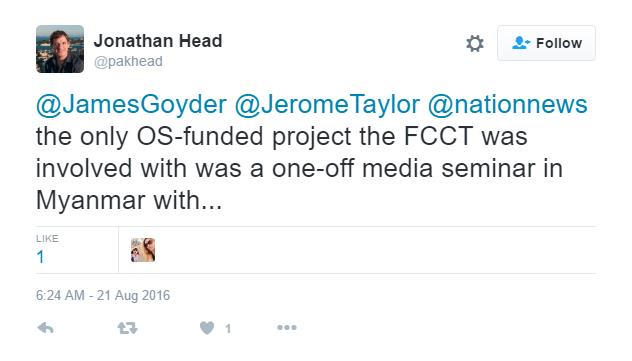 However, evidence has surfaced that exposes this too as an unequivocal and intentional lie. 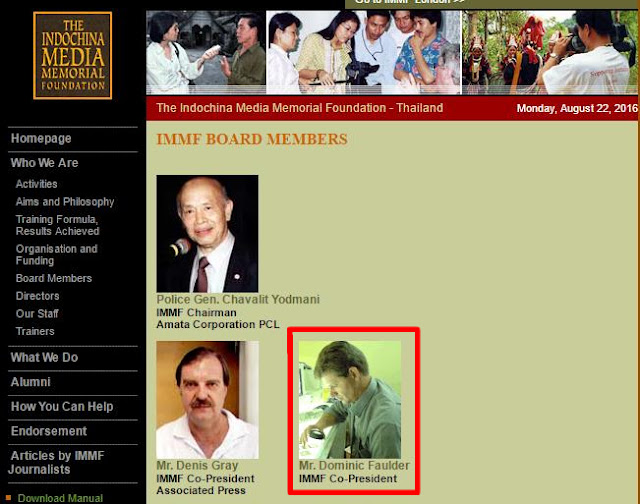 The organisation called, "The Indochina Media Memorial Foundation" (IMMF), openly declares its Open Society funding on its own webpage under "sponsors." Faulder's position on the IMMF's board of directors is listed under "IMMF Board Members." He is also listed as "IMMF co-president."

On every webpage of the IMMF site, the organisation is clearly located within, and functions as a part of the FCCT. Searching the Internet reveals years of Open Society-IMMF-FCCT programmes training a virtual army of indoctrinated young people serving to expand Western media influence throughout Southeast Asia, not only in Thailand but in neighbouring Myanmar and Cambodia.

Thus, Faulder and Head both intentionally lied regarding their ties to Open Society and have indeed not only associated with the organisation for years, but have admittedly received funding from Open Society. It appears that their denial lies upon the notion that despite IMMF functioning in the same office and operated by the same people who constitute the FCCT, it technically absolves the FCCT from being associated with Open Society. But as the Soros Leaks have revealed, and as several of the Open Society-IMMF-FCCT documents from training programmes reveals, they function as a single entity.

This information clearly conflicts with BBC senior editor Jonathan Head's claim of a "one-off" media seminar. Open Society and the FCCT either directly or through its front, the IMMF, have coordinated activities with Open Society for years.

Faulder and Head have refused to comment on whether they would resign in the wake of being caught intentionally lying to the public regarding their activities and matters of journalistic integrity, funding and transparency. Failure to resign would likely further undermine the Western media's perceived legitimacy in Southeast Asia and in Thailand particularly.

The Thai government so far has not weighed in on the matter regarding whether action would be taken against foreigners living in Thailand via media accreditation but functioning as foreign agents and lobbyists. Violations of visa laws can land foreigners in jail or even have them permanently deported from Thailand.