Bombs rocked two tourist destinations in Thailand yesterday, in Trang and in the coastal city of Hua Hin. Several people are reportedly dead and many more are injured. The bombings have now been splashed across international headlines, likely at least temporary damaging Thailand's tourism sector, one of several likely objectives behind the attacks. 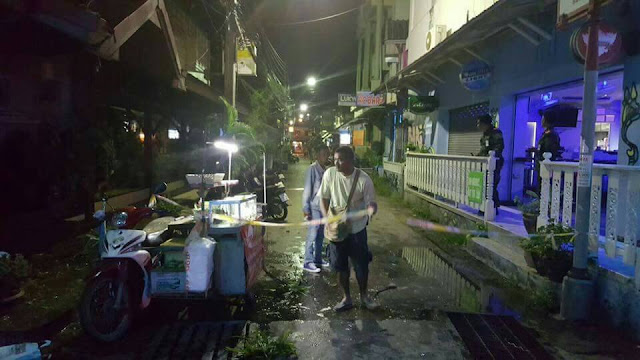 The most likely culprits are forces linked to ousted former-Prime Minister Thaksin Shinawatra, his political party Pheu Thai and his street front, the United Front for Democracy Against Dictatorship (UDD or "red shirts").

Shinawatra and his supporters suffered a significant defeat just days ago in a pivotal national referendum which saw the passing of a new charter that would all but end his party's prospects of returning to power.

In the past, when Shinawatra's forces have felt politically cornered, they have violently struck back. The move will harm the nation's economy, undermine the government's ability to maintain peace and stability, give the more radical elements of Shinawatra's movement a boost in morale and send a message to Shinawatra's opponents to come back to the table for talks rather than continue one with the systematic dismantling of his political party.

Shinawatra has a history of excessive violence, having led a "War on Drugs" in 2003 that left nearly 3,000 people dead in under 90 days. The following year, Shinawatra would put down a protest in Thailand's troubled south, killing in excess of 80 people in a single day. Throughout his time in power and after being ousted amid a 2006 military coup, Shinawatra has systematically kidnapped, assassinated or otherwise "disappeared" his political opponents.

The following year, Shinawatra would again put protesters in the streets. This time he would augment them with approximately 300 heavily armed militants brandishing M16s, AK47s, hand grenades, M79 40mm grenade launchers and even rocket-propelled grenades (RPGs). 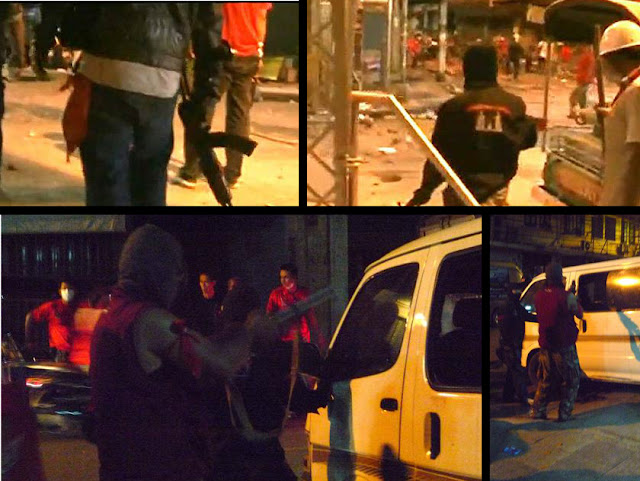 Nearly 100 people would die during the clashes that ensued, with the violence climaxing in citywide arson dwarfing the destruction the previous year. 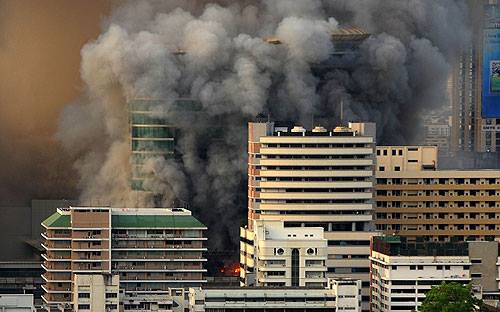 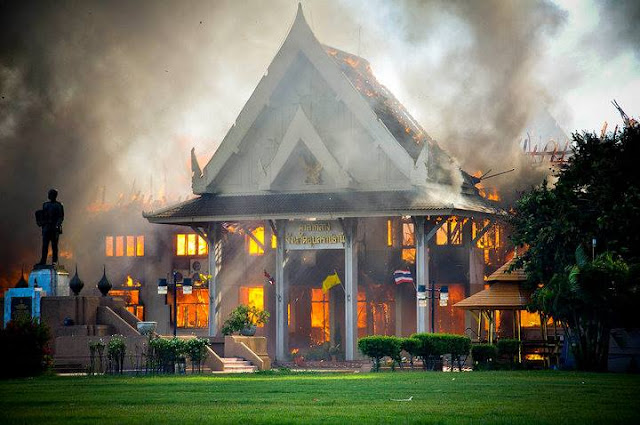 In 2013-2014 when massive protests demanded that Shinawatra's sister, Yingluck Shinawatra step down from power, he would again deploy heavily armed militants into the streets, carrying out nightly attacks on protest camps throughout Bangkok. Nearly 30 men, women and children would die in the violence. 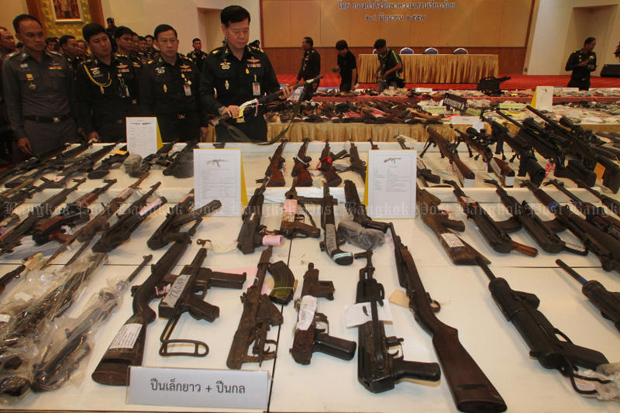 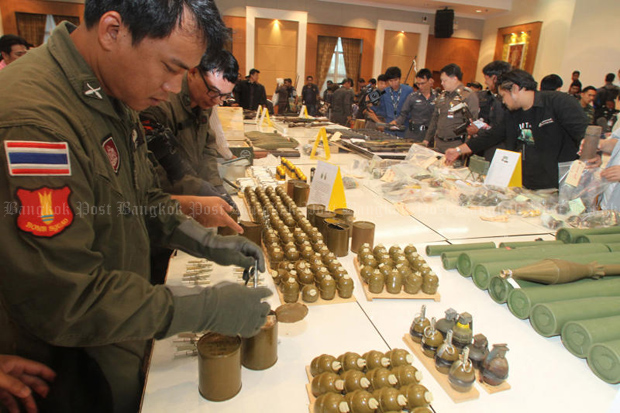 In 2014, the military intervened and finally ousted the Shinawatras from power.

An uneasy peace followed, but Shinawatra supporters have since attempted to pressure the government into allowing street protests again, leaving the ever looming threat of renewed violence and terrorism hanging over Thailand.

However, nearly a year ago, in August 2015, a large bomb would kill 20 in downtown Bangkok. The bomb resembled almost identically bombs deployed during previous attacks by Shinawatra's forces. The bombers appeared to be militants from a Turkish terrorist organisation called the "Grey Wolves." The Grey Wolves, the LA Times would reveal in a 1998 article, were connected directly to the US government and NATO. The article stated:


...the Gray Wolves operated with encouragement and protection of the Counter-Guerrilla Organization, a section of the Turkish Army's Special Warfare Department. Working out of the U.S. Military Aid Mission building in Ankara, the Special Warfare Department received funds and training from U.S. advisors to establish "stay behind" squads of civilian irregulars who were set up to engage in acts of sabotage and resistance in the event of a Soviet invasion.


US complicity in Shinawatra's violence will not seem so shocking as readers shall see.

In terms of bombings, the US Embassy itself would admit in cables released by Wikileaks that Shinawatra's forces were likely behind at least 5 separate incidents, and possibly linked to a much larger coordinated bombing on New Year's Eve in late 2006.

In one cable titled, "Thai Government Ascribes Bombings to Political Opponents," the US Embassy in Bangkok would admit:


Many observers will find it plausible that Thaksin or his supporters may have orchestrated bombings in order to discredit those who overthrew him. During the last two years of Thaksin's administration, there were numerous incidents in which bombs were placed at Bangkok sites associated with Thaksin's opponents, including:

The US Embassy would then go on to enumerate bombings likely carried out by Shinawatra and his supporters, listing up to 5 attacks:


- On March 27, 2006, an unexploded bomb was discovered next to the Democrat Party headquarters (ref I);

- On March 9, 2006, a small bomb exploded at a guardpost outside the house of Privy Councilor Prem Tinsulanonda (ref J); on the same day, a bomb exploded at the Royal Vajiravut College, targeting anti-Thaksin academic Chai-anan Samutthawanit;

- On December 8, 2005, a small bomb exploded at a phone booth outside of Lumpini Park, which had become a site for recent anti-Thaksin rallies; and

- On November 3, 2005, a small bomb exploded on property of the Manager Media Group, owned by leading Thaksin critic Sondhi Limthongkul.

While the US Embassy at the time would stop short of accusing Shinawatra of the New Year's Eve blasts, its confidential cable indicates that Shinawatra was at least a likely suspect. Despite this, cables before and after the bombing illustrate a concerted effort by the US government to create political conditions in Thailand they knew would return Shinawatra and his allies to power.

Considering these facts, Shinawatra is now only one of two prime suspects, the second being separatist groups in the far south, but groups whose violence has never extended to either of the locations of yesterday's bombings.

Despite Shinawatra's use of violence and terrorism as a political tool, the US and Europe have afforded him virtual impunity while in power and afterwards while attempting to seize back power.

Explaining this support is the utility Shinawatra provided the US and Europe while in power between 2001-2006.

This includes his commitment of Thai troops to the US invasion and occupation of Iraq in 2003, attempt to pass a US-Thai free trade agreement in 2004 without parliamentary scrutiny, allow the US to use Thai territory as part of its extraordinary rendition program and privatise Thailand's national natural gas conglomerate, PTT.

The Wall Street Journal, in 2001 would write regarding Shinawatra's privatisation of PTT in an article titled, "Thailand's Privatization Efforts Get Boost From PTT's Offering," stating:


For PTT's IPO, the government opted for a broad-based public offering instead of selling a minority stake to an individual strategic investor. The model jibes with Mr. Thaksin's "privatization for Thais" campaign promise made during the approach to Thailand's parliamentary election in January.

Among the foreign investors who assumed ownership of previously state-owned PTT included Chevron and Exxon, whose ownership of Thai assets for now nearly two decades, has been one of many points of contention for opponents of Shinawatra and his politics.

It is clear then why Shinawatra's abuses and violence have not only been overlooked by the US and Europe but in many ways, aided and abetted by them.

Evidence is still forthcoming however, but considering Thailand's current juncture, it is not likely a matter of who or why, but simply a matter of "how."