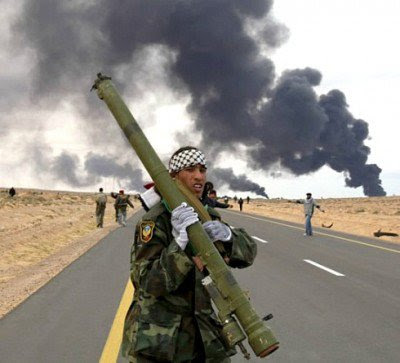 An already disturbing prospect proposed by the United States has been compounded by shifting alliances among supposed "moderate rebel" groups waging war in Syria. Militant groups backed by the United States and its Persian Gulf allies were presented with an oblique promise of anti-aircraft missiles revealed across several statements from US officials.


The collapse of the latest Syria ceasefire has heightened the possibility that Gulf states might arm Syrian rebels with shoulder-fired missiles to defend themselves against Syrian and Russian warplanes, U.S. officials said on Monday.

This policy shift alone is troubling, considering that every other weapon system, funding and type of equipment funnelled into Syria's ongoing war has ended up in the hands of US State Department designated foreign terrorist organisations, including Al Qaeda's Syrian franchise, Jabhat Al Nusra, and its spin-off, the so-called Islamic State.

Perhaps the best indicator of what will happen with such anti-aircraft missiles if sent (and many appear already to have been sent covertly) is the fate of hundreds of US-made anti-tank TOW missiles that have ended up in Al Nusra and the Islamic State's hands across Syria.

Furthermore, allegedly "moderate rebels" have turned their US-made missiles onto other US-backed groups, including Kurdish militias operating in northern Syria.

Stray Missiles in the Hands of Stray Militant Factions

But what is more disturbing still regarding the shifting and reckless policy of the United States is open admissions from US-backed "rebels" themselves that they are openly joining the ranks of designated terrorist organisations.


Some of Syria’s largest rebel factions are doubling down on their alliance with an al Qaeda-linked group, despite a U.S. warning to split from the extremists or risk being targeted in airstrikes.

The rebel gambit is complicating American counterterrorism efforts in the country at a time the U.S. is contemplating cooperation with Russia to fight extremist groups.

Not only does the WSJ article provide legitimacy to Syria and Russia's reluctance to trust or cooperate with the United States in negotiating with militant groups that are clearly aligned with and propagating terrorism across Syrian territory, but further exposes efforts to arm such militants by the US and its European, NATO and Arab allies as irresponsible at best, and knowingly aiding and abetting listed terrorist organisations at worst. 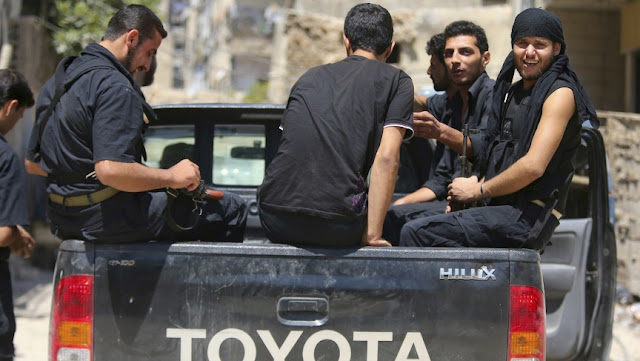 With the WSJ story and others like it becoming more frequent, recent US statements regarding the arming of such groups including with anti-aircraft missiles, groups now openly aligned with Al Qaeda and the Islamic State, pose a security risk not only to Syria and the region, but to the entire world.

The US and its allies' willingness to continue arming groups openly aligned to terrorist organisations, and arming them with increasingly powerful and sophisticated weapons is a bankrupt and dangerous policy contravening international law and jeopardising global security.

Regardless of the threats and rhetoric wielded by the Western media, Syria and its allies must stay the course, seize and secure the rest of Aleppo, and double-down on efforts to liquidate terrorist factions across the nation. And despite Western rhetoric, the vast majority of Syria's population, including Aleppo's population, live in government-controlled territory where life in some places has even begun to return to something resembling normality.

For the US and its allies to intentionally attempt to prolong this conflict, is an act of geopolitical malice, spite and depravity surpassed only by its stated intentions to escalate the conflict by sending anti-aircraft missiles amid the chaos.