Geopolitical analyst and political commentator, Andrew Korybko, in an August 2016 piece titled "Can Thailand Tackle Its Hybrid War Threats?," part of a larger series on hybrid warfare, covered Thailand's political crisis both internally and how it relates to ongoing regional and global power struggles, particularly between Washington and Beijing. He accurately encapsulated the many dynamics of Thailand's political lay, including the pivotal role the nation's Constitutional Monarchy plays in uniting the Thai people and maintaining political stability in the midst of sometimes fierce, even violent power struggles between countervailing special interests.

He also accurately described how the US-backed opposition, including the United Front for Democracy Against Dictatorship (UDD or "red shirts") ceaselessly attempts to undermine this positive force for political stability.


The pro-American “opposition” inside Thailand therefore intends to whip up emotionally driven tension related to the monarchy issue as a means of both impugning the military authorities and deepening the socio-political divide inside the country. Pro-monarchist Chan-o-cha and his government are enforcing what the average Western individual interprets as “draconian anti-free speech legislation” in imprisoning social media ‘activists’ that criticize and disrespect the King, and the Red Shirts are gleefully manipulating their strategically planned provocations in such a way as to create a false association between the monarchy, the military, and “dictatorships”. This has the effect of generating even more Western civil and governmental support for their “pro-democracy” movement and in preparing the international (Western) consciousness for the policies that they’d like to implement if they’re able to seize power.

One particularly troublesome observation Korybko made is in regards to attempts by Thailand's enemies to exploit the inevitable succession process:


The more radical of the anti-monarch “demonstrators” could even decide to violently target grieving funeral processors and disrupt other commemorative public expressions of sorrow, which would immediately induce an outbreak of communal conflict between the two camps.

Korybko also takes notes of what he describes as "The Red Buddhists." As pointed out previously, there have been an increasing amount of resources placed into this pro-American opposition front to turn it from purely political in nature to a pressure point exploiting yet-to-be Buddhist-Muslim tensions across the country.


Thai Buddhists and Muslims have co-existed for generations with Thai Muslims constituting a celebrated part of Thailand's sociocultural fabric. The separatist movement in Thailand's deep south has long been described by both the Thai government and even by the separatists themselves as primarily political in nature. 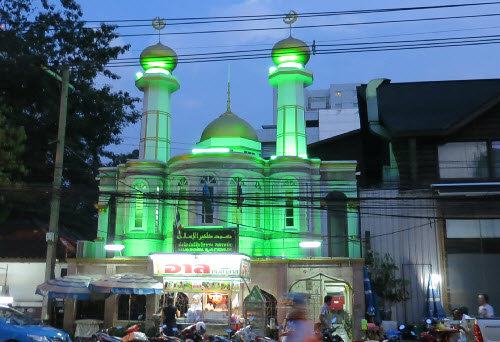 Thus, attempts to foster hostilities between Buddhists and Muslims has been the exclusive project of pro-American opposition groups aligned not with southern separatists, but with exiled, deposed prime minister, Thaksin Shinawatra.

The real danger then exists in putting together both Korybko's observations regarding possible attempts to disrupt succession, and this emerging strategy of sowing interreligious discord.

With pro-American opposition suspected behind what was considered by many as a "test run" bombing on August 12, 2016, Mothers' Day, it is likely that they and their sponsors both among the US government and across the Western media, will use staged provocations to blame on "Muslims" in an attempt to inflame tensions at this critical juncture.

The Foreign Correspondents Club of Thailand (FCCT), a collective organisation representing various prominent Western media agencies including the BBC, AFP and Reuters, has even organised "talks" in an attempt to generate momentum behind the "Buddhist-Muslim tensions" narrative.

The FCCT openly abuses its journalistic credentials and controversial Open Society funding to support US-backed opposition groups and Western interests in Thailand. Their attempt to turn isolated political tensions into a wider interreligious conflict fits well with the Western practice of dividing and undermining nations that do not comply with Western interests. The US having failed to undermine Thai stability with "pro-democracy activists," appears to have changed tack just as it had done during the 2011 Arab Spring where it transitioned from supporting ineffective street protests used mainly as cover for a second component, armed groups the US is arming and supporting amid perpetual violence up to and including today.

These groups should be the first and most relevant suspects scrutinised in the wake of any "attacks" amid Thailand's sensitive transition period.