The South China Morning Post in its article, "Thai activist invites Hong Kong’s Joshua Wong to address Bangkok students," would provide further details regarding why Wong was attempting to enter Thailand before being turned away by immigration.


The newspaper would admit that:


A Thai pro-democracy activist is hoping Joshua Wong Chi-fung, an Occupy leader and founder of political party Demosisto, will inspire young people to raise their voices in his military-ruled country.

Netiwit Chotipatpaisal, a 20-year-old political ­science student, believes Thailand may see an ­Occupy-like movement in a few years’ time and has invited Wong to speak in Bangkok.

Considering the fact that Wong's political movement, including the so-called "Umbrella Revolution" from which it sprang, is in its entirety a creation of the US State Department, one can only surmise that Netiwit Chotipatpaisal seeks also to attract US funding to create chaos in Bangkok's streets, just as US-funded agitators did in Hong Kong in 2014.

The newspaper would continue by stating:


Netiwit has been involved in several campaigns and groups pushing for reform of the Thai education system. He is now planning to follow in the footsteps of Wong and launch a party.

“I am learning from Demosisto. We have to fight from inside and outside the system,” he said.

Netiwit's group already staged an "umbrella protest" in the wake of Wong's being turned back to Hong Kong by Thai immigration authorities.

In reality, Wong's party, Demosisto, focuses primarily on undermining China and upholding British colonial dictates laid out as the UK returned territory it had seized from China 156 years earlier. Both Demosisto, and the "Umbrella Revolution" itself lacked any practical political platform relevant to the actual people of Hong Kong. That may be why the 2014 protests waned before holdouts were driven from the streets, not by Hong Kong police, but by angry residents.

The US Seeks to Incite an "Occupy Uprising" in Thailand

Undoubtedly the United States and its favoured political parties in Thailand will attempt other means of seizing back political power and overwriting Thailand's national institutions. Having suffered irreparable setbacks after the 2014 coup and waning popularity as well, Thailand's opposition has attempted to reinvent itself through US-funded organisations posing as "nongovernmental organisations" (NGOs). 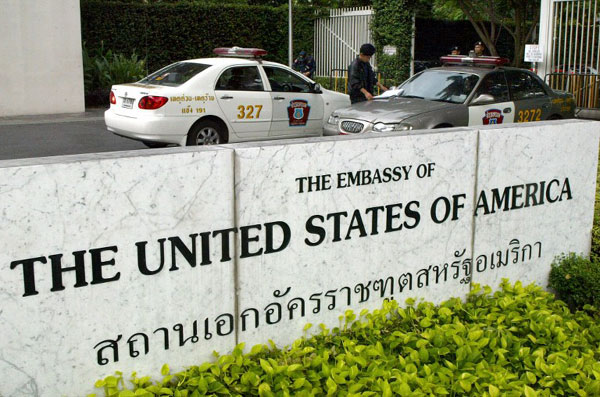 These organisations, though run by foreign organisations including the National Endowment for Democracy (NED), Open Society, the Foreign Correspondents Club of Thailand (FCCT) and even the US Embassy in Bangkok itself, attempt to portray students like Netiwit Chotipatpaisal as independent activists who have built up their movements on their own and who just "so happen" to have the summation of the Western media's attention and support on their side.

If and when they take to the streets as Netiwit hopes, the Western media and the US Embassy will be there, conflating their numbers, exaggerating any measures the government may take to control their disruptive behaviour and possibly using the mobs as cover for pre-planned violence as the US and their partners within Thailand's opposition did in 2009 and 2010.

Dashing the Hopes of Eager Proxies

For Thailand's government, an easy way to dash Netiwit 's hopes of becoming Thailand's "Wong" is to urgently reform NGO laws exposing and heavily restricting those organisations who claim to be "nongovernmental" and "independent" while being entirely funded and directed by foreign governments abroad.

Netiwit and his circle of followers insist on being treated as "equals" by their elders but lack the humility to admit they have no constructive contributions to make toward improving society besides disrupting national stability and reciting political slogans parroted from foreign-funded agitators like Joshua Wong.

If and when Netiwit and others like him decide to pragmatically tackle issues like quantifiably improving education, creating sustainable jobs, cleaning up the environment and/or improving national infrastructure, then perhaps they will earn support from the public. Until then, they will be required to feign such support by relying on the US State Department and the Western media and their ability to transform agitators into "democracy activists."