Turkey, in a bid to legitimize its uninvited, illegal incursion into northern Syria, has created several media platforms specifically reporting on what it calls "Operation Euphrates Shield." 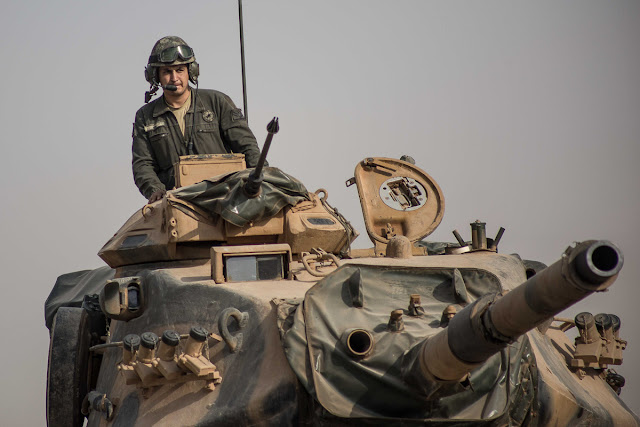 Operation Euphrates Shield, according to official Turkish government statements, aims at "securing" a buffer zone in northern Syria spanning from the Euphrates river in the east and extending all the way to Azaz in the west. This is also coincidentally the exact same buffer zone US policy think tanks have called for since at least 2012 - specifically seeking Turkey to implement it.

The Brookings Institution - a corporate-funded policy think-tank whose policymakers have helped craft upper-level strategy for the Iraqi, Afghan, Libyan, and now Syrian conflicts as well as plans laid for future confrontations with Iran and beyond - has been explicit regarding the true nature of these "buffer zones." In a 2015 paper titled, "Deconstructing Syria: A new strategy for America’s most hopeless war," it states:


...the idea would be to help moderate elements establish reliable safe zones within Syria once they were able. American, as well as Saudi and Turkish and British and Jordanian and other Arab forces would act in support, not only from the air but eventually on the ground via special forces.

The paper goes on by explaining (emphasis added) :


The end-game for these zones would not have to be determined in advance. The interim goal might be a confederal Syria, with several highly autonomous zones and a modest (eventual) national government. The confederation would likely require support from an international peacekeeping force, if this arrangement could ever be formalized by accord.But in the short term, the ambitions would be lower—to make these zones defensible and governable, to help provide relief for populations within them, and to train and equip more recruits so that the zones could be stabilized and then gradually expanded.

Despite claims that Turkey's actions are necessary to "stop" the self-proclaimed "Islamic State" (ISIS) and help end the deadly conflict raging in Syria, it is clear that instead, Turkey is carving out territory specifically to shelter militants fighting the Syrian government in an attempt to perpetuate, even expand the violence for as long and as extensively as possible.


It was Turkey's own foreign minister who was quoted by the Washington Times in an article written just before Turkey embarked on its invasion titled,  "Turkey offers joint ops with U.S. forces in Syria, wants Kurds cut out," admitting that ISIS was being supplied and reinforced specifically from within Turkish territory. The article stated (emphasis added):

It is thus abundantly clear that ISIS sprung into being and has since sustained itself through extensive state sponsorship - sponsorship that has flowed freely over Syria's borders with Turkey and Jordan. Any genuine attempt to cripple the source of ISIS' fighting capacity would require securing the Turkish and Jordanian borders with Syria, not invading Syria itself. 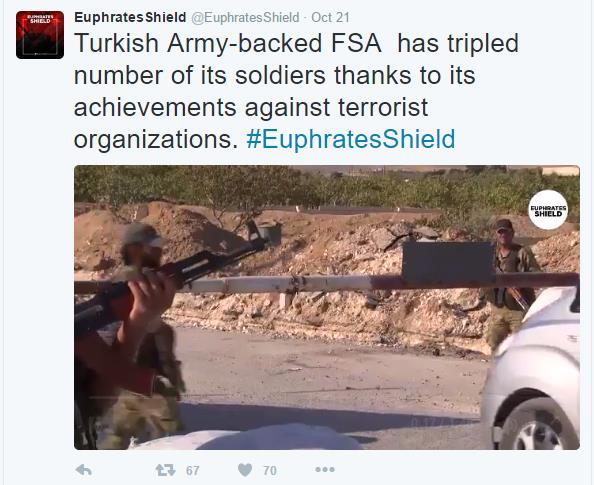 
Turkish Army-backed FSA has tripled number of its soldiers thanks to its achievements against terrorist organizations.

However, this claim is highly problematic. The process of crossing a battlefield successfully alone does not "increase" the number of soldiers fighting in one's army unless militants an army is engaged against are recruited into the advancing force.

"Liberated" civilians would not be able to simply "join" Turkish-backed militant groups. A responsible military commander knows that incorporating untrained civilians into a military force without at least 1-3 months of basic training creates more disadvantages and dangers than any benefits gained from "tripling" the size of one's force.

Additionally, men of fighting age found on the battlefield in areas Turkish-backed troops are advancing through must be vetted to ensure they have no ties to terrorist organizations including ISIS - yet Turkey's government has not given any details on how these "new fighters" are being either vetted or trained.

In other words, it simply seems as if Turkey is attempting to explain why - within the buffer zone it is creating - numbers of militants are swelling without admitting that the entire purpose of the buffer zone in the first place is and always was to provide a sanctuary for Al Qaeda, ISIS, and other extremist forces inside Syria just as Turkey has provided them sanctuary in Turkey for the last 5 years.

Turkey's Operation Euphrates Shield is indeed a shield wielded by Turkey and its US partners. But it is a shield lifted up not in defense of the Syrian people or the Turkish state itself, but instead brought to face those forces decisively defeating Al Qaeda and ISIS deeper within Syria and poised to push remaining militants out of Syria, permanently.

With the establishment of a Turkish occupied buffer zone - as imagined by US policy makers who crafted this operation for Turkey long ago - it will now be exceedingly difficult to eradicate remaining militants at the edge of Syrian territory after they are defeated and driven out of the nation's interior.

Indeed Turkey is shielding a region west of the Euphrates, not from terrorists, but to protect them.