As US Berates Russia For Political Meddling, It Openly Meddles in China

Despite a concerted backlash against what US political leaders and policymakers claim is Russian interference in America's internal politics, the US continues to openly interfere in the internal politics of other nations worldwide, including most recently, China. 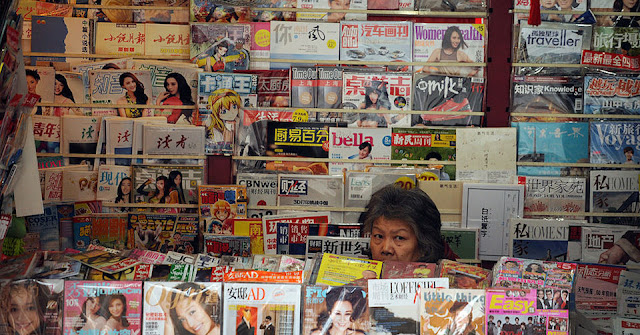 In an effort to redirect attention and blame for America's unravelling political fabric, the US political establishment and its media has spent an inordinate amount of time blaming Russia for allegedly "hacking US elections" by infiltrating the Democratic National Committee (DNC)'s e-mails.

The hacks revealed impropriety within the Democratic party as well as e-mails between US presidential candidate and former US Secretary of State Hillary Clinton and her adviser, lobbyist and counsellor to US President Barack Obama, John Podesta which revealed everything from admissions US allies Saudi Arabia and Qatar were providing material support to the Islamic State in Syria and Iraq to the Clinton Foundation receiving funding from these same state sponsors of terrorism.

The fallout from the revelations has included a media blacklist targeting what is called "fake news," or, any media outlet that opposes narratives established by Washington, particularly regarding the contents of the leaked e-mails. It also resulted in claims that Wikileaks (who published the leaked e-mails) was intentionally mixing fabricated e-mails in with genuine DNC data, the Intercept would report.

The United States government and policymakers have also promised retaliation against Russia, who is accused of orchestrating the hacks and working with Wikileaks to publish the e-mails.


Considering the gravity the US has viewed alleged interference in its internal political affairs, one would expect Washington to have a solid record of respecting the sovereignty of other nations, specifically in regards to respecting their internal politics and particularly now, as Washington attempts to justify growing hostility toward Moscow regarding alleged meddling.

Do As I Say, Not As I Constantly Do...
But even as the backlash against Russia reaches a fevered pitch, the US finds itself openly, some may even say, shamelessly meddling in the affairs of other nations on an equal or greater degree than even Russia has been accused of.

The US State Department funded and directed National Endowment for Democracy (NED) openly admitted that its partner, China Digital Times (funded by both NED and Open Society) leaked documents revealing lists of topics deemed sensitive by the Chinese government.

Foreign Policy in an article titled, "All the News Unfit to Print: What Beijing Quashed in 2016," would claim:

On an almost daily basis, China’s ruling party and the state apparatus it controls relay detailed instructions to news outlets, websites, and social media administrators throughout the country on whether and how to cover breaking news stories and related commentary. A sampling of these are leaked each year and published by the non-profit California-based website China Digital Times. The collection is not exhaustive, but given the opacity of Chinese government decision-making, the orders offer unique insights into party leaders’ priorities and their favored methods of “guiding public opinion” in a changing technological landscape.

Foreign Policy and China Digital Times both admit that the purpose of leaking this information is to undermine Beijing's ability to control the political narrative within China's borders. It is a clear effort by Washington to contribute to its decades-long overarching objective of undermining, encircling and containing China's rise in Asia Pacific to maintain American military, political and economic primacy in the region.

Foreign Policy, China Digital Times and the National Endowment for Democracy may claim that their motives for, and methods of leaking genuine documents to the Chinese public to skew China's political landscape in Washington's favour should be irrelevant to the fact that they are also simply exposing the truth. But if they genuinely believed that, their anger and promised retaliation against Russia for doing exactly the same thing, would appear tremendously hypocritical and undermine the gravity Washington is attempting to consign claims of Russian hacking. 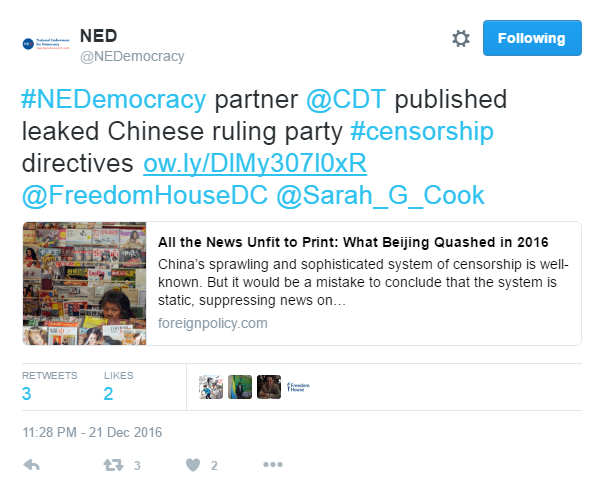 If it is wrong for Russia, or anyone for that matter, to leak truthful information to the American public regarding the US government, thus undermining the credibility of American institutions and offices, it would logically follow that it is likewise wrong for the US to do this abroad in nations like China.

That the United States not only partakes in this tremendous hypocrisy, it should be noted that the National Endowment for Democracy and its subsidiaries including Freedom House, exist solely to openly and constantly undermine political order worldwide, including backing foreign opposition parties, street protests in foreign capitals, pro-US media outlets worldwide and even meddling in other nations' electoral processes through the use of "election monitors" who selectively notice or ignore voting irregularities depending on whether a pro-US opposition party stands to win or lose any given election.

Thus, unlike the US who has large, dedicated organisations openly pursuing political destabilisation worldwide, Russia and China are only accused of doing so, lacking any formal organisations or foundations focused on such activity, and with little to no evidence substantiating US claims.

As the US continues justifying an expanding war of words and actions against Moscow, it is important for observers to note that at the same time Moscow is condemned for interfering in American politics, America is openly and eagerly interfering in the politics of other nations, worldwide.

If other nations are not allowed to cry foul and "retaliate," why should the US be?