China is Building a Navy to Displace, Not Defeat the US in Asia

In many ways, China's socioeconomic and military influence in Asia has already balanced a long-lopsided equation of geopolitical power in the region. The social and economic stability brought by the rise of China along with the rest of Asia has helped eliminate many of the "dark alleys" the US and its European allies have often used to create division, destruction and opportunities to then intervene, even overturn entire governments. 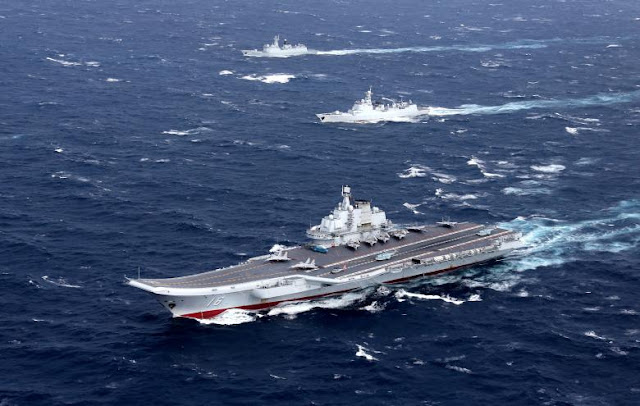 China's naval ambitions in particular have been disparaged by Western political and military analysts who believe (correctly) China's growing naval capabilities will never be on par with the United States' global-spanning naval forces.

But that is precisely the point.

Western analysts have pointed out that China's blue ocean naval capabilities fall far behind America's, and that it will be many years if and when China is able to compete on equal terms. For instance, analysts point out China's single operational aircraft carrier, Liaoning, faces America's 10 aircraft carriers.

However, if China's ambitions are not to overwhelm or compete with America's global fleet, and merely deter and ultimately displace America's presence in Asia Pacific, its current fleet is already adequate.  Analysts point out that when China's naval assets are operated near Chinese shores, land-based weapon systems including land-based aircraft significantly tip the balance of military power in Beijing's favour.

China's decision to establish what are essentially unsinkable aircraft carriers in the South China Sea amid its island-building frenzy have angered waning Western hegemons specifically for this same reason. From these islands, should China choose or be forced to, military power can be exerted against Western naval assets in ways even the West's formidable military would struggle to counter.


And while analysts, politicians and demagogues alike attempt to accuse China of building up its forces in what will result in full-scale war between Beijing and the West, the reality is that war will only unfold if the West fails to gracefully concede the end of its "age of empires," and its unwarranted influence it has maintained quite literally an ocean away from its shores, in Asia Pacific.


Beyond America's waning military presence in the region, many of what Washington has called its "allies" have recently shown signs of shifting economically and even militarily toward Beijing. This is the result of not China's growing military might, but its expanding economic influence, as well as its differing style of diplomacy relative to Washington's.

Where the US has pursued a foreign policy in Asia Pacific based on "nation building" either through direct military intervention and occupation, various methods of coercion or through the use of its immense number of nongovernmental organisations used to build parallel institutions within allied nations to then displace existing governments and replace them with more pliant regimes, Beijing has focused more on cutting economic and immense infrastructure deals, regardless of who is in power.

China does not operate media organisations propagating political agitation within neighbouring states as the US does throughout Asia Pacific, nor does it play a role in supporting or opposing political parties in neighbouring states as the US does. In other words, no matter how beneficial a relationship with the US may seem to Asian Pacific states, the spectre of subversion always looms overhead, where with dealings with Beijing, it does not.

China's naval forces then, are not intended to sail across the Pacific and project Beijing's influence upon the people of North and South America. It is intended to deter and eventually displace American forces in Asia. In many ways, China's strategy is already working and in time, it will inevitably succeed.

America's presence in Asia Pacific, like all imperial powers before it attempting to project influence thousands of kilometres from their own shores, finds itself in an untenable, unsustainable position. Even without a push, this precarious balancing act must eventually come to an end. China's burgeoning naval fleet, however, will provide a sufficient push to ensure it does sooner than later, and on Beijing's terms.