The full scope of the current deception being perpetrated against both the American people, and the rest of the world under the presidency of Donald Trump and the supposed "push back" from the "liberal media" is exposed in full amid President Trump's unfolding migrant policy. 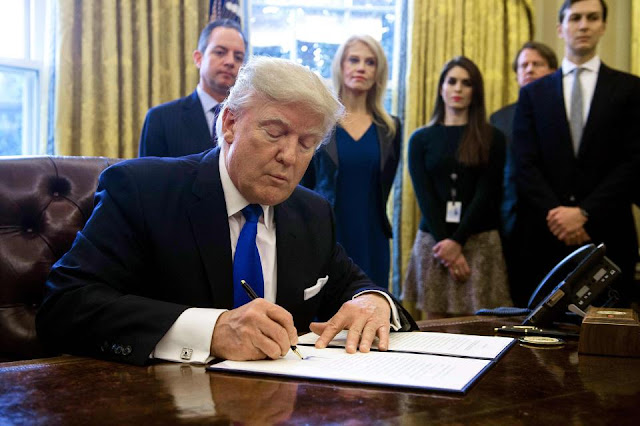 Bloomberg, in two articles, reveals in full how the US proxy war against Syria, presided over by US President Barack Obama, prepared for under US President George Bush Jr., and plotted since President Bush's father was in office in the 1990's, continues in earnest under President Trump. The articles also reveal how the so-called "liberal media's" "push back" against President Trump willfully omits this glaring fact, and diverts public attention toward more partisan explanations for what is blatantly continuity of agenda.

Trump said the measure would prevent terrorists from being admitted into the country. Democrats labeled the order a "Muslim ban" and criticized it as inhumane. Absent from the order was a provision from a draft of the document, obtained by Bloomberg, that would require the Defense Department to make a plan to create "safe zones" in Syria and neighboring countries for people fleeing that nation’s civil war.


The admission of refugees would be suspended for 120 days. Citizens of Syria, Iraq, Iran, Sudan, Somalia, Yemen, and Libya would be banned from entering the U.S. for 90 days, while the government determines what information it needs from other countries to safely admit visitors. The order doesn’t list the countries but points to laws that cover those seven, which were provided by the White House.

Bloomberg and other allegedly "liberal" media platforms have attempted to link President Trump's policies to his own business interests, deflecting public attention away from the fact that the seven nations targeted by the new executive order are precisely the same nations targeted since the 1990's by Wall Street and Washington special interests. 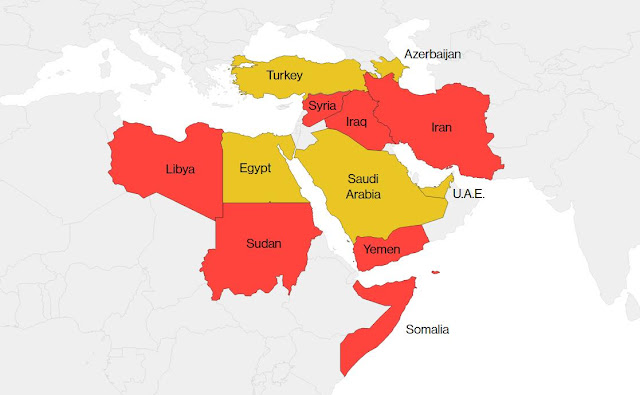 US and European media are also leveraging their own manufactured "migrant crisis" to sell the concept of "safe zones" in Syria, a policy laid out and pursued under President Obama when initial US-backed regime change in Syria failed to materialize. The policy is now being continued without interruption under President Trump.

President Trump has signed an executive order that bans citizens from seven Muslim-majority countries in the Middle East from entering the United States for 90 days, according to the White House. His proposed list doesn’t include Muslim-majority countries where his Trump Organization has done business or pursued potential deals. Properties include golf courses in the United Arab Emirates and two luxury towers operating in Turkey.

In reality,  the nations spared from President Trump's executive order are those nations the United States has partnered with for decades, including premier state-sponsors of terrorism.

Even a cursory glance at the latest executive order defies the alleged purpose behind it - fighting terrorism. Saudi Arabia and Qatar's exclusion from the list of restricted nations begs belief. 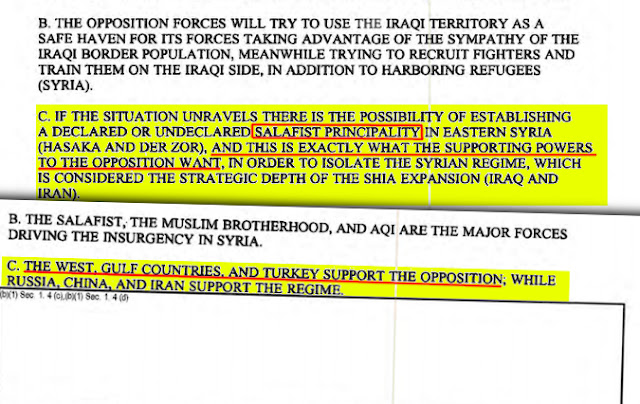 Saudi Arabia and Qatar are the ideological and financial centers of terrorist organizations including Al Qaeda and the self-proclaimed Islamic State (ISIS). These nations have provided extensive material support to both terrorist groups according to not only President Trump's National Security Adviser, retired US Army lieutenant general Michael Flynn, but also President Trump's opponent in the 2016 presidential election and former US Secretary of State, Hillary Clinton.

Flynn was director of the US Defense Intelligence Agency (DIA) when in 2012, a memo was leaked revealing "the West, Gulf monarchies, and Turkey" behind the rise of a what at the time was called a "Salafist principality."

To clarify precisely who these "supporting powers" were that sought the creation of a "Salafist" (Islamic) principality" (State), the DIA report explains:

In other words, the US, its European allies, and its closest allies in the Middle East, sought the rise of a "Salafist" (Islamic) "principality" (State) in eastern Syria, precisely where ISIS is now centered. The immensity of ISIS forces, territorial holdings, and its ability to continuously wage war against the combined military forces of Syria, Iraq, Lebanon's Hezbollah, Iran, and Russia leave no doubt that the terrorist organization enjoys not only state-sponsorship from abroad, but is the recipient of a multinational state-sponsorship. 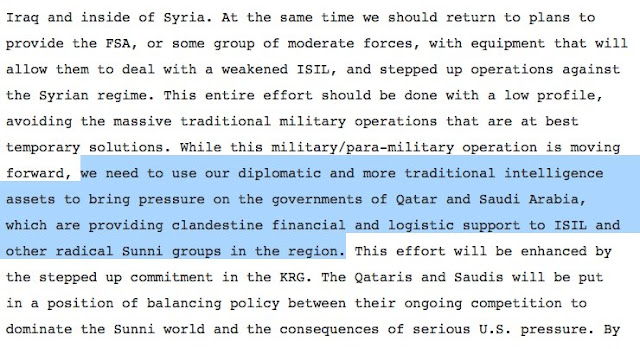 In 2014, in an e-mail between US Counselor to the President John Podesta and former US Secretary of State Hillary Clinton, it would be admitted that two of America's closest regional allies - Saudi Arabia and Qatar - were providing financial and logistical support to ISIS.

The e-mail, leaked to the public through Wikileaks during the 2016 US presidential election campaign, stated:

How then, does a state sponsor of terrorism like Saudi Arabia escape President Trump's alleged "anti-terror" executive order which conveniently excludes - once again - the greatest offender and threat to the security of the American people and the world at large?

Retired US Army general, Wesley Clark, during a 2007 Flora TV talk titled, "A Time to Lead," revealed a singular agenda stretching back as far as 1991, relayed to him by then US Under Secretary of Defence for Policy Paul Wolfowitz. Clark stated (emphasis added):

Clark would fast forward to the wake of the terrorist attacks on September 11, 2001 and the US invasion of Afghanistan. He would state (emphasis added):


...we attacked Afghanistan. I was pretty happy about that, we should have. And then I came back to the Pentagon about six weeks later, I saw the same officer, I said why why haven't we attacked Iraq? We are sill going to attack Iraq, he said, oh sir he says, its worse than that. He said he pulled up a piece of paper of his desk, he said, I just got this memo from the Secretary of Defense's office, it says we are going to attack and destroy the governments in in seven countries in five years. We are going to start with Iraq and then we are going to move to Syria, Lebanon, Libya, Somalia, Sudan and Iran seven seven countries in five years.

It is no coincidence that so many years later, and transcending both President Obama and now President Trump's administrations, the same seven nations are still being targeted, while the admitted global centers of terrorism - Riyadh and Doha - remain protected - even nurtured, heavily armed, and defended - by the United States and its European allies. 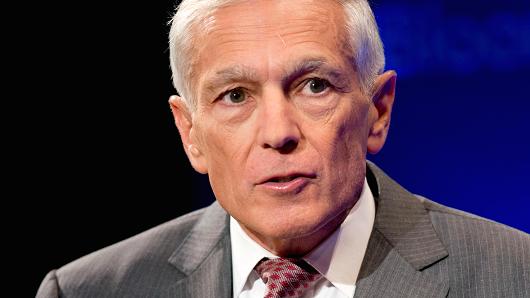 What is unfolding is decades-long continuity of agenda - simply dressed up in the latest and presumed-to-be most effective partisan narrative Wall Street and Washington can script - one in which President Trump is pursuing "racist" and "discriminatory" migrant policies while hypocritically defending his own personal business interests.

And while it is no coincidence, but rather documented conspiracy - media organizations like Bloomberg apparently expect the public to believe it is just a coincidence, that President Trump's abhorrent rhetoric and transparent hypocrisy just so happens to serve several decades of policy - perpetuated regardless of who is in the White House, and regardless to how various US presidents have spun their role in advancing this singular, nonpartisan policy throughout those decades.

However, the script writers on Wall Street and in Washington have once again skillfully manipulated the American people - not on an intellectual level - but on a very elementary, emotional level. Hatred or support for President Trump and his crass rhetoric blinds both sides from the fact that all President Trump is doing, is precisely what President Obama, President Bush, President Clinton, and President Bush Sr. did before him - exactly what US corporate-financier special interests desire - nothing more and nothing less.