Despite unmaterialized hopes of a new tack for US foreign policy, it appears that each and every front of US aggression has reopened in earnest, from the Middle East vis-a-vis Iran, to the South China Sea opposite China and now across Eastern Europe between US-led NATO and Ukrainian forces against Russia. Articles like the UK Independent's "‘Everything is destroyed’: on the ground as latest surge of deadly violence strikes eastern Ukraine," sound the alarm, stating:

While the fighting has been largely kept to the outskirts of Avdiivka during the day, the nighttime has been hellish for residents. Shells have landed indiscriminately throughout the town, and civilian casualties are racking up.

The Independent would continue, stating:


According to Hug, both sides are making use of heavy weapons such as the multiple-launch Grad missile system, and they are doing so in plain sight of OSCE observers. Grads, along with 152mm and 122mm artillery, were banned under the Minsk II agreement, which was signed two years ago after the catastrophic battle of Debaltseve.

And to accent just how "in plain sight of OSCE observers" Ukrainian forces are operating, footage taken by BBC staff shows two OSCE observer vehicles following directly behind advancing Ukrainian tanks during one of the reported offensives.

Despite the BBC's own staff capturing the footage, the BBC's reporting on Ukraine features carefully cropped photos omitting the OSCE observer vehicles.

The OSCE itself, in its own official reports, states (emphasis added):

While US and European media portray US foreign policy as having shifted under incoming president Donald Trump, Ukrainian forces are emboldened by a systematic campaign of US-NATO support, including US-NATO forces operating both inside and outside Ukraine attempting to train and equip Ukrainian forces ahead of renewed fighting anticipated in eastern Ukraine.


The U.S. is working with Canadians, British and Lithuanian forces at the remote training center near Yavoriv, which is now referred to as the Joint International Peacekeeping Security Center.

Training ranges from gearing up ministry of interior troops to regular troops, military police and medical personnel, all admittedly for the purpose of reengaging rebel forces in the east in direct violation of agreements made with eastern Ukrainians, brokered between the US, NATO and Russia.

CBS News would admit as much, stating:


"The training here will increase their survivability on the battlefield," Ducich said. "They're going against an enemy that has very sophisticated weapons -- and not just from the lethal standpoint... there's an electronic warfare aspect to this that we have not seen that we are now incorporating into the training here. I don't think it's about matching (Russia's capabilities). I think it's knowing what you can do and maximizing that effectiveness on the battlefield."

In addition to openly training Ukraine's army to reignite hostilities, rebel leaders have been targeted and assassinated amid the fragile ceasefire.

In October 2016, Arseny 'Motorola' Pavlov, a prominent and effective rebel commander, was killed in a terrorist bomb-blast in Donetsk. More recently, the BBC would report that Oleg Anashchenko, the defense minister of the Luhansk People's Republic was likewise killed in a targeted terrorist bombing. 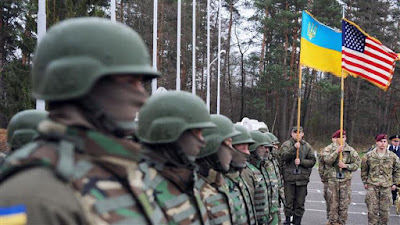 It is no coincidence that US-NATO forces openly and diligently prepare Ukraine for war in violation of ceasefire agreements, while assassinations are carried out against military commanders of the very forces the West is preparing Kiev to fight against.

Despite this, US and European media sources are attempting to portray Ukraine as "abandoned" by the US. while portraying America's new presidential administration as "sympathetic" to Russia.

Despite this elementary attempt at misdirection, it should be noted that US-NATO attempts to bolster Ukrainian forces and covert attempts to degrade eastern Ukrainian rebel forces ahead of renewed hostilities has only accelerated under the presidency of Donald Trump, not subsided.

For geopolitical analysts, understanding the actual interests driving hostilities and confrontation between Washington, London and  Brussels vis-a-vis Moscow, unfolding directly and indirectly, helps sift through political rhetoric and identify the actual motivations and special interests behind them moving this war forward regardless of who sits in the White House.

By all actual metrics, the war in Ukraine appears set only to expand, not in spite of US efforts under President Trump to the contrary, but precisely because US special interests plan to use Trump's intentionally misleading and empty rhetoric as cover to reignite hostilities more drastically than before the ceasefire was struck.

Just like the US feigned rapprochement with Iran in an attempt to paint Tehran as unreasonably aggressive and ungrateful for American sympathy ahead of hostilities always meant to expand, Trump's feigned affinity for Russia and its political leadership will be quickly converted into "regret" as Russia is portrayed as taking advantage of American "good-will," "forcing" America to become more heavily involved in a Ukrainian crisis it itself ignited between 2013-2014.