On February 21, all major Chinese TV channels were reporting that the hull of China’s second aircraft carrier was finished, and awaited the painting stage to start. However, progress may be further along than officially acknowledged. 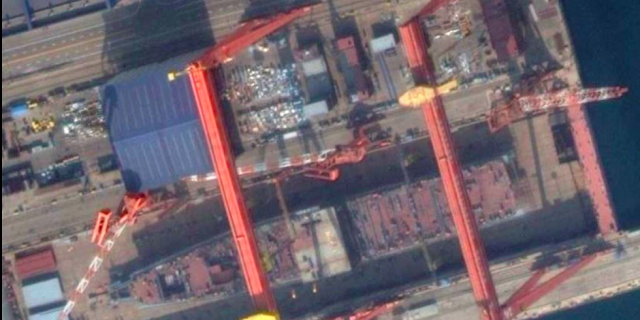 It should be noted that officially it's China’s intentions to build a fleet of aircraft carriers along with other possible specifications for future ships which have been discussed for years now.

There is no doubt that those among China’s principal geopolitical opponents knew about these plans for just as long, since it would be difficult to hide the massive hull of an aircraft carrier being built in the docks of the Dalian city from satellites.

It should also be noted that China has an aircraft carrier in its navy already – Liaoning which is named after the province where the Dalian docks are situated. This warship was created when China decided to subject the unfinished Soviet aircraft carrier Varyag that they bought from Ukraine back in the 90s to a major overhaul. Ever since 2013, this ship has been used by the Chinese navy for building the experience and expertise needed for the creation of newer and more modern carriers.

However, it’s also been employed in a number of operations, especially in the South China Sea, as 80% of its territory is contested by regional players, most of which are expecting various degrees of Washington’s support. NEO has been covering such operations, the last of which began with the passage of a large battle group, headed by Liaoning, through the Miyako Strait.

As for the new aircraft carrier that is under construction right now, experts agree that it is still following Soviet design like Liaoning, but Chinese experts argue that the characteristics of this new warship will be “much more impressive”. In particular, it seems that China is planning to expand the number of J-15 fighter jets (a variant of Russia’s Su-33) that are to be carried simultaneously.


The construction of one more aircraft carrier of the same design is to begin in the nearest future. The main design feature of all the Liaoning-style ships is the ramp that is situated in the bow, allowing jets to take off using the so-called ski-jump method.

However, future Chinese carriers are to be equipped with steam catapults that are then to be replaced by a more promising electromagnetic catapult. It’s should be noted that out of the 11 aircraft-carriers that are being operated by the US Navy not a single one is equipped with electromagnetic catapults. It’s expected that the carriers of the new Gerald R. Ford class, the first of which may be handed over to the US Navy this year after countless delays, will be the first US carrier to put the new catapult design to the regular use.

From a political point of view, it’s been particularly interesting to hear the remarks made by the representatives of China’s government during the hull dedication, who announced that in order to ensure China’s national security, its navy must have “at least” six aircraft carrier battle groups.

It’s been extremely noteworthy to learn that in addition to the future presence of two groups in the Western Pacific, the other two aircraft carrier groups are going to patrol the Indian Ocean. As for the remaining two, they are most likely to be kept in reserve.

If one is to take to heart the rhetoric that Beijing has been voicing in the last 10-15 years, the fact that the Indian Ocean is to be patrolled by Chinese aircraft carriers should not be surprising. Even today there’s a number of reports about the limited permanent presence of some Chinese destroyers, frigates, and submarines in this area. NEO has repeatedly discussed the critical importance of the Indian Ocean for the smooth functioning of the Chinese economy. 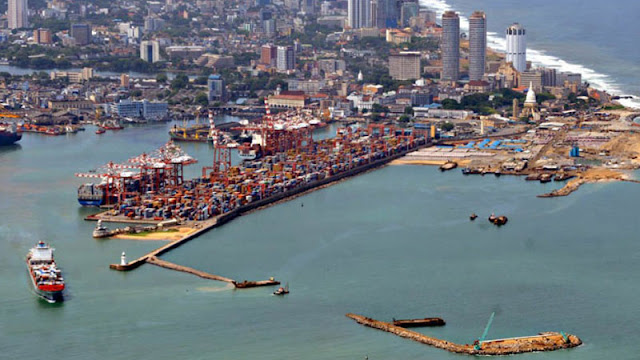 Apparently, today in Beijing, securing Chinese trade traffic is being done by simultaneously implementing two complementary projects. Of these, the first is to establish a land trade route through Pakistan, which will connect the western province of China to the ports of Gwadar and Karachi on the Arabian Sea. The second is to establish the permanent presence of the Chinese navy in the Indian Ocean, sufficient to ensure the safe movement of cargo ships between Gwadar and Karachi, on the one hand, as well as ports in the Persian Gulf and East Africa on the other.

However, the prospect of China’s growing military presence in the Indian Ocean has not excited New Delhi, which has always believed that the Indian navy should play a decisive role in India’s “own” ocean. To address this problem, India is stepping up its naval construction projects, where an extreme amount of importance is attached to the construction of aircraft carriers as well.

At this point the aircraft carrier Vikramaditya has been flying the flag of the Indian navy for three years. Just like the Chinese Liaoning, it was constructed through the deep modernization of a former Soviet aircraft carrier, the Admiral Gorshkov, in which Russia was assisting India. The next step is the construction of similar designs, but this time entirely in and by India.

Japan is also in a process of playing an extremely important role in shaping the situation in the Indian Ocean region. Although the South China Sea will become the first Asia-Pacific sub-region, where the military and political aspects of the carrier race will be felt, Japan has recently been paying a lot of attention to the Indian Ocean. This is particularly important for India’s interest in expanding comprehensively Japan’s presence in the region.

The Japanese navy already has two light aircraft carriers of the Izumo class, which are being referred to as “destroyer-helicopter carriers”. According to experts, on the decks of Izumo ships, besides helicopters, there’s more than enough space for the F-35 fifth-generation fighter's vertical take-off and landing variant. 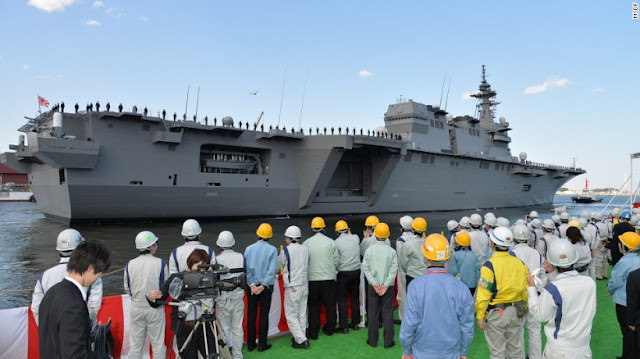 If Tokyo doubts the reliability of its alliance with the United States regarding security issues, it will undoubtedly dramatically accelerate the process of building up its own military. In this case, a part of the Japanese navy will be provided with a list of modern aircraft carriers that will be much larger than the Izumo class.

However, the strengthening of the military presence of China, India, and Japan in the Indian Ocean region will become increasingly pivotal in the future. As of now this region is dominated by US navy. There’s a possibility that there could be a “fast transfer” of this region to Washington’s “reliable allies”, among which the primary position is occupied by India. For the first time such a possibility was announced ten years ago, as it would have been quite consistent with the concept of “offshore balancing” (formulated in the second half of the 90s), which suggested the US military and political withdrawal from the front lines of confrontation with its main geopolitical opponents by allowing its allies to step in.

In fact, attempts of practical implementation of this concept were examined in Obama’s first term. So Trump’s neo-isolationism in its current manifestation is not new, as the concept behind it was developed some 20 years ago.

But in any case the (hypothetical) American “fast transfer” of the Indian Ocean region can be pursued when there’s more or less the first visible signs of a Sino-Indian union being formed.

In conclusion, one might note that the great Indian Ocean is vast, so its waters can host all sorts of aircraft carriers and other warships from different countries without any conflicting preconditions.

But the fact is that they will move around on the same routes, carefully keeping an eye on each other. And in this case, as they say, “various scenarios” may unfold in this region.

Vladimir Terekhov, expert on the issues of the Asia-Pacific region, exclusively for the online magazine “New Eastern Outlook”