Singaporean Defence Minister Ng Eng Hen reiterated the importance of the city-state's policy of Total Defence. In his statement coinciding with the 75th anniversary of the British surrender of the island to Japanese forces in 1942, he spoke specifically about the 5 pillars of Total Defence. 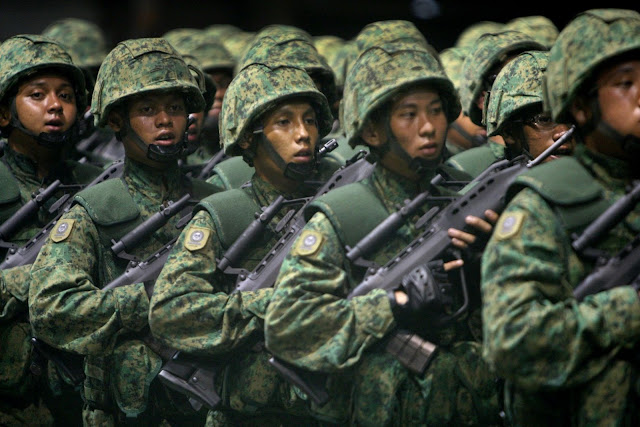 He emphasised that Singapore cannot depend on other nations for its defence, and warned that "the strong do what they can and the weak suffer what they must."

According to Singapore's Ministry of Defence website, the 5 pillars of Total Defence include military, civil, economic, social and psychological defence. The policy specifically includes the entirety of Singaporean society as part of Total Defence. While clearly the military and other state institutions play larger roles in each of the above mentioned pillars, the policy assigns clear examples all Singaporeans can follow to contribute.

Singapore's Defence Minister and his ministry's 5 pillars reflect an often overlooked realism to geopolitics. It is realism in which "alliances" and "treaties" ultimately amount to nothing and that a nation can only depend on itself to truly ensure self-preservation.

Singapore's defence policy, in turn, reflects on the global transition from American and European unipolar hegemony, toward a more equitable balance of power within a multipolar world where national sovereignty once again holds primacy, as does a nation's responsibility to uphold its own sovereignty.


The Five Pillars of Total Defence

The five pillars of Singapore's Total Defence policy, military, civil, economic, social and psychological, reflect on the multiple vectors through which foreign aggression can move in attempts to undermine and overthrow any nation's (including Singapore's) sovereignty.

While military and economic (which includes cyber and information) defence are more or less self-explanatory, social and psychological defence are owed an explanation.

According to Singapore's Ministry of Defence, social defence includes:


Singapore enjoys social and economic stability because people of all races and religions live together harmoniously. We know what could happen if we allow extremist ideologies and racial prejudice and discrimination to endanger social cohesion and harmony. We befriend, accept and help people of different ethnicities.

Regarding psychological defence, the ministry states:


While being prepared is the key to Total Defence, it is always the fighting spirit, the will, the resilience of Singaporeans that determines whether or not our nation will overcome a crisis. When each Singaporean is resolved and determined to overcome any crisis together, proud of our country and willing to stand up to defend what is ours, we can be assured of a secure future, regardless of the challenge.

National unity and pride are cited as essential for cultivating a viable psychological defence.

How Aggressors Use Different Vectors Against Targeted States

Reflecting on the past decade and a half of US foreign policy, one can see examples of how the US alone used overt military aggression to invade, occupy and systematically divide and destroy nations like Iraq and Afghanistan.

The US also used economic warfare to undermine and destabilise nations ahead of overt military aggression. In other cases, such as Libya, Egypt and Syria, economic warfare, price manipulation and even sanctions, helped create social and psychological cracks among the populations of targeted nations.

Libya and Syria's populations had vulnerable social and psychological fault lines as well that the United States and its allies were able to exploit to foment unrest and eventually destructive military conflict. Had these nations extended national defence to include economic, social and psychological warfare, they may have fared better in the face of American aggression.

In one form or another, every state appears aware of these necessary aspects of national defence. But Singapore has openly and cohesively integrated them into a single strategy; Total Defence.

For nations across the rest of Asia Pacific, still very much targeted by the United States in its decades-long effort to encircle and contain China by asserting American hegemony over China's peripheries, particularly in Southeast Asia, developing a similar, focused and properly integrated Total Defence policy would be highly recommended.

Each state across Southeast Asia possesses different strengths and weaknesses regarding Total Defence, but could adopt and build on Singapore's basic premise. So many other aspects of Singapore's successful socioeconomic policies have been adopted, modified or built up upon across Asia, enhancing regional resilience to global challenges. Total Defence appears to be another concept to prepare both Asian governments and their populations to defend themselves against the full-spectrum warfare waged against the region by both evident enemies today and potential enemies tomorrow.