A bomb targeting a Bangkok military hospital and injuring 24 on the third anniversary of the 2014 military coup which deposed the government of Yingluck Shinawatra (sister of fugitive and former prime minister Thaksin Shinawatra) was categorically condemned as "inhuman" by institutions both within Thailand and beyond. 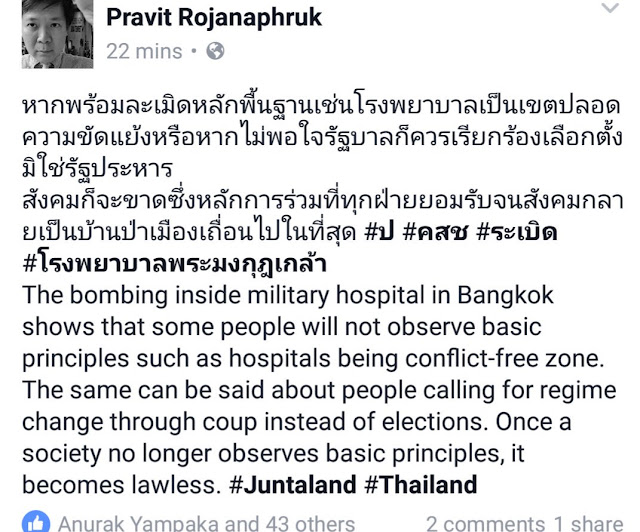 Shinawatra's supporters including both the United Front for Democracy Against Dictatorship (UDD) and Shinawatra's political party, Pheu Thai Party (PTP) have previously targeted hospitals as well as have deployed heavily armed violence amid their struggle to seize power and topple Thailand's independent institutions.

They are considered the most likely suspects behind Monday's attack.

However abhorrent, shockingly the violent act has been defended and excused. Among those providing such a defence comes from award-winning Thai journalist, Pravit Rojanaphruk.

As a tireless critic of Thailand's military, monarchy, courts and virtually all other aspect of Thai society, he has made a name for himself among US and European circles focused on leveraging human rights toward upending foreign centres of political power and replacing them with Western equivalents.

In this role, Pravit R. has been awarded "outstanding journalist" by the Sathirakoses-Nagapradipa Foundation and received grants from the Canada-based  International Center for Human Rights and Democratic Development, the Reuters Fellowship and the Katherine Fanning Fellowship for Journalism and Democracy. 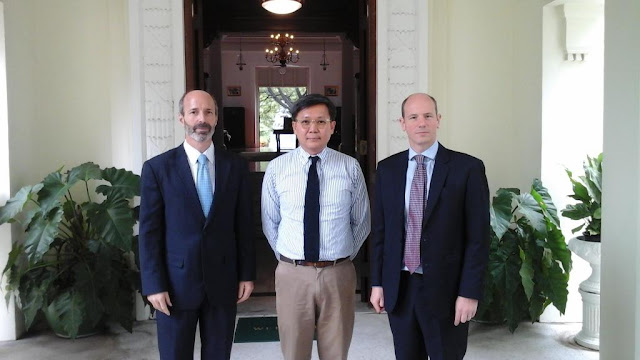 Pravit R. also is in regular contact with American and European diplomats, politicians and other representatives of interests dedicated to undermining Thailand's current political order.

In a recent statement regarding a bombing others have unconditionally condemned, Pravit R. offered a more conditional response:

The bombing inside military hospital in Bangkok shows that some people will not observe basic principles such as hospitals being conflict-free zone. The same can be said about people calling for regime change through coup instead of elections. Once a society no longer observes basic principles, it becomes lawless.

In other words, Pravit R. proposes that while bombing a hospital is bad, so is conducting a coup. It is an obvious, if oblique way to provide justification for the attack and assign indirect blame to the 2014 coup organisers regardless of who was actually behind the bombing.

Elections Do Not Equal Impunity, Coups Do Not Justify Terrorism

Pravit R.'s reference to "elections" omits the inconvenient reality that elections do not subsequently grant a government impunity from the law. Violations of the law by an elected government are handled by a nation's courts, not its electorate. In the lead up to the 2014 coup, that is precisely what transpired.

Upon being accused, investigated and convicted of abuse of power, the Shinawatra government openly refused to recognise the court's verdict. With the courts being ignored and the police unable or unwilling to enforce the law due to Shinawatra's control over the national police force, the responsibility fell upon the military.

That Pravit R. never mentions this and frames Thailand's political crisis as a simple case of usurping democratic governance, it should come as no surprise that he is also obliquely defending terrorism, even if it targets hospitals.

It should be remembered that the Shinawatra government includes members of parliament who quite literally led a raid on a hospital in 2010, necessitating its temporary evacuation. That too was an act of terrorism targeting an institution deemed protected even amid war. Pravit R.'s insistence that a government composed of such MPs has a legitimate right to contest elections let alone take power in the wake of them betrays the ideological facade he and those like him have constructed to defend and promote Shinawatra, his political networks and the foreign interests sponsoring and benefiting from them.

It is safe to say that the awards and fellowships presented to Pravit R. were either grossly misplaced, or are intentionally designed to lend legitimacy to those who have none at all. In either case, Pravit R.'s attempt to excuse and deflect blame for terrorism targeting a hospital speaks volumes about Thailand's so-called "pro-democracy" opposition and goes far in explaining why the 2014 military coup was necessary in the first place.