A video went viral of an aggressive American man beating his chest, grabbing his genitals, and taunting a Muslim family on a Texas beach in support of what he believed was US President Donald Trump's mission of purging America of "Sharia law" and "ISIS" (the Islamic State). 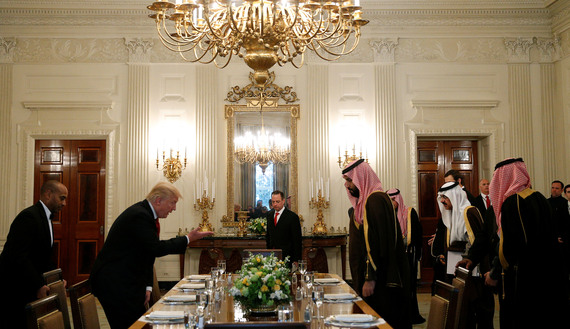 What this man was likely not aware of as he made his lowbrow political statement was that the "Sharia law" he actually fears is called "Wahhabism," and that his candidate of choice "Trump" was preparing to visit  the very source of Wahhabism - Riyadh, Saudi Arabia.

Meanwhile, the American left remains convinced that their priority should remain resisting an alleged covert alliance between Russia and the Trump administration of which no evidence actually exists. They have made this a priority at the expense of exposing and resisting a documented and longstanding alliance between the US and Saudi Arabia that has endured for decades.

There is common ground here for the American public, but only if the intentional distractions presented by the Western media from both right and left cover can be sidestepped and the truth revealed. 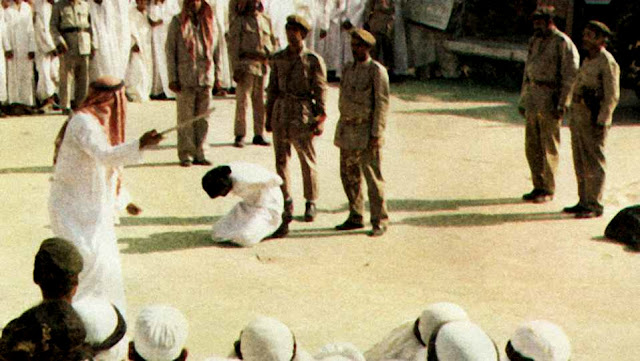 It is no coincidence that both Riyadh and its American sponsors are fighting precisely the same enemies as the Islamic State: Syria, Iraq, Iran, Russia, and Lebanon's Hezbollah.

In essence, President Trump's visit to Riyadh represents a paradox for Trump supporters.

He's the man supposed to "save America" from "Sharia law," but is visiting Riyadh from whence the corrosive version of "Sharia law," known as Wahhabism, originated and is actively perpetuated from. Worst of all, Riyadh perpetuates Wahhabism with the explicit and long-term support of the United States, including now under the Trump administration.

For the average chest-beating, genital-grabbing Trump supporter, America's complicity in propping up Wahhabism began under US President Barrack Obama who they suspect had infiltrated American politics as a "secret Muslim." President Trump's victory at the polls was supposed to reverse this "infiltration."


Back in reality, US support of Wahhabism goes back to the end of World War I and accepting the waning British Empire's handover of its vast networks across the colonized Arab World it used to divide and conquer the people living there. 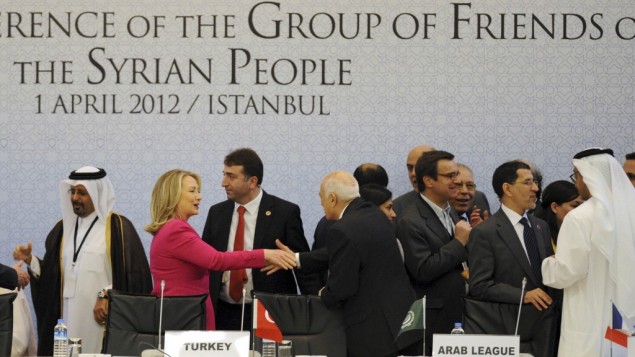 Wahhabism represented one of the more successful and prolific British-supported networks of divide and conquer, adjacent to the Muslim Brotherhood. These networks were employed for decades, including during several attempts to break the Syrian nation under the rule of current Syrian President Bashar Al Assad's father, Hafez al-Assad.

In fact, Hafez al-Assad's victory over the Muslim Brotherhood and their Wahhabi allies in Syria served as impetus for the creation of Al Qaeda, a joint US-Saudi project aimed at dislodging Soviet forces from the Central Asian state of Afghanistan.


After the Soviet Union withdrew from Afghanistan, Al Qaeda and terrorist organizations like it would be utilized to fight US and Persian Gulf conflicts the world over either as proxy forces or as pretexts for justifying direct military intervention.

From Libya to Iraq, and from Afghanistan to Somalia, the United States has invaded, occupied or otherwise attacked and destroyed nation after nation predicated on the threat posed by "Al Qaeda." However, it is clear, that if one nation's government should be attacked, undermined and overthrown in pursuit of defeating the threat of Wahhabism and groups who practice it - Al Qaeda and the Islamic State - it would be Saudi Arabia.

Yet this is not only the one nation the US refuses to target, it has elected to support the regime residing in Riyadh with decades of bipartisan political, economic, and military support.

This support continues, unconditionally, under the Trump administration and represents a conundrum for his supporters who remain convinced he is a champion against terrorism, not yet another facilitator of it. But he is.

US Coddling the Worst Regime on Earth (Not Russia)

The American left remains convinced - in no small part because of the media - that Russia represents the single greatest existential threat to America beyond its borders and the sole reason the Trump administration has assumed office instead of their candidate of choice, Hillary Clinton. Yet there is no actual evidence of this or that US policy - foreign or domestic - would have differed had Clinton won the election. 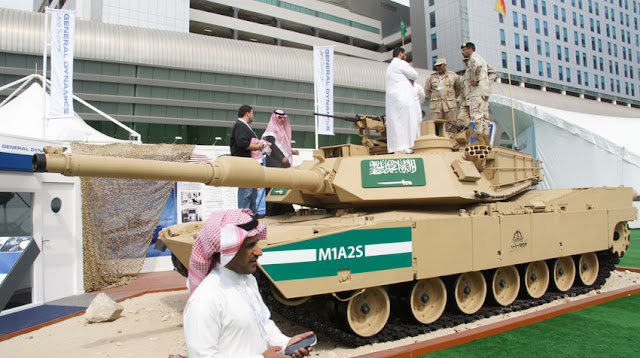 What there is evidence of, is US ties with Saudi Arabia which include much more than the symbolic and routine meetings Trump's administration is having with Russian representatives - meetings the Obama administration before it had held including the notorious "reset" meeting between then US Secretary of State Hillary Clinton and Russian Foreign Minister Sergey Lavrov.

President Obama sealed the largest weapons deal in US history with Riyadh in 2010. President Trump plans on augmenting that 60 billion USD deal with a proposed 11.5 billion USD deal which includes combat vessels.  The UK Independent reports that:

Provided by BAE Systems PLC, a Bradley Fighting Vehicle and an M109 artillery vehicle are also under consideration as part of the deal.

The Independent also notes that:


...there will be $1bn (£770 million) worth of munitions, including armour-piercing Penetrator Warheads and Paveway laser-guided bombs. These contracts had been suspended by the Obama administration because of Saudi Arabia’s military campaign in Yemen, which caused the deaths of thousands of civilians.

It is clear that after Obama sealed a 60 billion USD deal with Riyadh in 2010, its "suspension" of certain weapon delivered were all but symbolic, and now with President Trump in office, to be reversed.

The Independent's mention of Yemen is important. It is a conflict which, like Syria, began in 2011 and has persisted with the brutal suppression of anti-US-Saudi-backed government forces across the nation as well as Yemen's civilian population. The US-backed regime in Riyadh has targeted Yemen with aerial bombardment, sea and air blockades, and even multiple ground invasions. 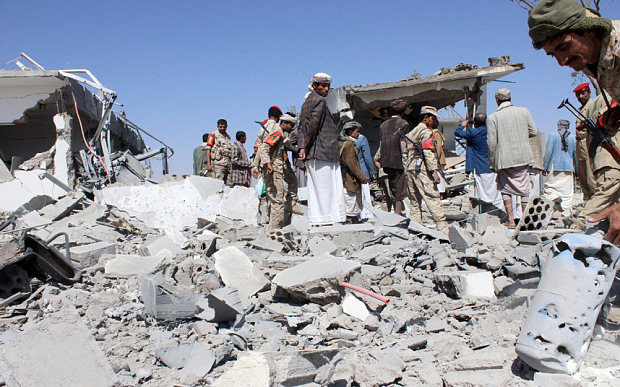 Many who support or oppose President Trump appear oblivious to the ongoing conflict in Yemen despite repeatedly weighing in on the adjacent Syrian conflict. This is owed to the selective and dishonest reporting of Western media.

This same media, who proposes that President Trump is coddling Russia at the expense of US sovereignty, has failed to expose with equal vigor the bipartisan support both President Obama and now President Trump have exhibited toward a very real threat to American - and global- security, Saudi Arabia.

In addition to the brutality it has subjected neighboring Yemen to, Saudi Arabia oppresses and executes hundreds of its own citizens as well, many of which are executed by public beheading.

The Guardian in a 2016 article reports that up to 157 executions were carried out in 2015, with beheadings reaching their highest level in two decades. This means that Saudi barbarity is on the rise, and despite attempts to portray the regime as one in the process of "reforming," the facts reveal a regime doubling down within the safety of impunity provided to it by Western politicians and the media.

While the American left appears fixated on President Trump's alleged ties to Russia, documented ties to Riyadh go unnoticed and unopposed. And while the American right is fixated on calling out Muslims real or imagined anywhere they find them, they remain oblivious to the fact that their own candidate of choice is coddling the very source of actual global terrorism.

It is an impressive accomplishment by the Western media, to convince the public that Washington's competitors are their covert allies and that true enemies of American principles, for all intents and purposes, don't even exist.

By doing so, the media has managed to enlist the American left in an adversarial campaign against Moscow it would have otherwise found impossible to provoke. It has also managed to slake racist and bigoted perceptions among Trump supporters without exposing Saudi Arabia or President Trump's role in propping up the Saudi regime and the terror the US and Riyadh collectively propagate globally.

President Trump's visit to Riyadh and the indifference among both the left and the right regarding it in many ways exposes the alternate reality American political discourse currently resides in. It is one dominated by emotions at the expense of facts, and until journalists, analysts and activists point out and question why both the left and the right share this critical blind spot instead of finding common ground within it, this unfortunate game will continue to consume America politically, consume Yemen in the fires of unchecked and unopposed war, and consume the people of Saudi Arabia and all others subjected to Wahhabism of body and soul.