Syria: Washington’s Boots and Missile Systems on the Ground to Defend ISIS and Associated Proxies

The US’ deployment of the HIMARS missile system to eastern Syria is designed to deter the Syrian Arab Army’s Dash for Deir az-Zor. 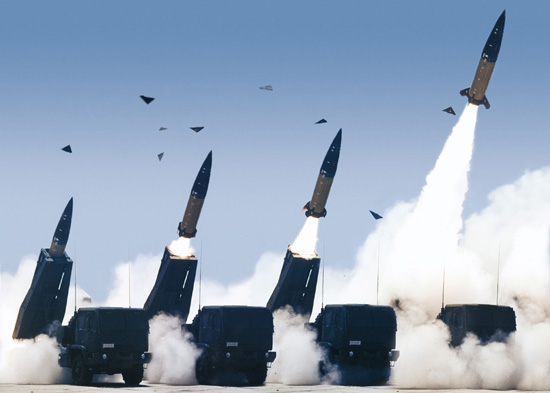 Many people were caught off guard when the Russian Defense Ministry announced earlier this week that “The US has redeployed two High Mobility Artillery Rocket Systems from Jordan to a US special operations forces base near the Syrian town of Al-Tanf”, and that “the range of HIMARS cannot allow for providing support for US-controlled Syrian Democratic Forces (SDF) operating against Daesh in Raqqa”. This led to the logical conclusion that the HIMARS could be used by the US to strike Syrian Arab Army (SAA) forces, just as the Pentagon’s developed a habit of doing several times already since April.

To put this all into context, the SAA just broke through some of Daesh’s occupied territory to reach the Iraqi border, thereby cutting off the US’ special forces and allied “rebel” forces in Al-Tanf from linking up with the majority-Kurdish “Syrian Democratic Forces” (SDF) laying siege to Raqqa right now and committing ethnic cleansing there. Moreover, this development prevents the US-backed forces from driving through the desert to Deir az-Zor, the last major Daesh-occupied city in eastern Syria and the location of a small encircled SAA contingent. The “Dash for Deir az-Zor” is becoming the new “Race for Raqqa” now that the latter is all but over, as the former will decide whether or not the entirety of eastern Syria falls under pro-American proxy control or not.

The SAA needs to liberate Deir az-Zor in order to keep the SDF and southern Al-Tanf “rebels” from connecting their occupied territories and enlarging the self-declared “Democratic Federation of Northern Syria” to include all of the Iraqi borders. If they fail in this task, then Syria will effectively be divided along East-West lines, and the former half could in principle connect to the corresponding demographic regions of neighboring Iraq to give rise to the unipolar transnational sub-states of “Kurdistan” and “Sunnistan”, or in other words, two “geopolitical ‘Israels’”. Should they succeed, however, then the SAA will not only diminish the prospects for a pro-Saudi “Sunnistan” along the Syrian-Iraqi Borderlands, but it would also give Damascus a fair chance at recovering some territory north of the Euphrates and reversing the SDF-YPG’s “federalization” momentum.

For that reason, the US deployed the HIMARS in southeastern Syria in order to deter the SAA from going any further in the Dash for Deir az-Zor, though that doesn’t mean that Damascus won’t give it a shot anyhow. There’s a high chance, just as Russia warned, that the US will use this missile system against the SAA, but there’s an equal probability that Moscow wouldn’t interfere in that case.

What will Russia’s stance be?

Moscow has been abundantly clear that it is strictly abiding by its anti-terrorist military mandate, and it’s already proven as much on multiple occasions by standing down whenever its “Israeli” partner bombed the SAA and Damascus’ allies. Moreover, Russia also never militarily responded to the US’ bombing of the SAA on the three times that it’s happened in just as many months.

In fact, First Deputy Chairman of the Federation Council’s Committee on International Affairs Vladimir Jabarov declared right after the first incident that “Russia has no intentions to use its Aerospace Forces against US missiles if Washington decides to carry out new strikes in Syria as it could lead to a large-scale war”, thereby confirming that there’s close to no chance that Russia would come to Syria’s aid if the US unleashed HIMARS against Deir az-Zor-destined SAA forces. Despite this unfavorable state of affairs, Damascus more than likely won’t be discouraged, and could still very well make a dash for the desert town regardless of the HIMARS hindrance. Even in the event that its soldiers are martyred, Syria might be calculating that their sacrifices would be worth it if there’s even a slight possibility that they can help delay the country’s post-war “decentralization” and de-facto internal partition.

About this eventuality, all indicators point to it basically being a fait accompli at this moment due to Russia’s reluctance to stop this scenario from unfolding. Actually, Russia is even going along with it to an extent, though not due to it having an interest in this happening, because it both doesn’t have the political will to commit the military forces necessary to stop it and also likely understands the process as being irreversible. This is why Moscow has chosen to take a “middle ground” between Damascus’ unitary vision and its Kurdish adversaries’ “federalist” one by proposing a system of “decentralization” in the Russian-written “draft constitution” for Syria. Furthermore, there are grounds to believe that Russia’s “de-escalation zones” will ultimately – whether wittingly or inadvertently – lead to the creation of “decentralization units” all throughout the country, especially in the Kurdish- and “rebel”-occupied quarters.

Taking into account what is implied by Russia’s actions (or lack thereof) about its preferred “political settlement” to the War on Syria, there are concrete reasons to argue that Moscow might have already accepted the de-facto establishment of the two transnational sub-state entities of “Kurdistan” and “Sunnistan” in exchange for Washington implicitly agreeing not to interfere with Russia’s two military bases in the western part of the country or its Damascus-granted rights to rebuild all of Syria’s energy infrastructure (which would by extent also include the facilities in the pro-American occupied areas). Whether or not this sort of understanding/agreement is in place, or even if the US would fully respect it if it was, is a matter of speculation and can’t be independently confirmed at this time, but an analytical reading of the situation indicates that this might very well be the case.

With this in mind, the SAA might only enjoy the direct support of the Russian Aerospace Forces so long as it’s fighting to liberate occupied territory from Daesh terrorists, not from the pro-American SDF-YPG and southeastern “rebel” forces that Moscow itself recognizes as part of the “political opposition”. Russia’s attitude seems to be that whatever the US does to the SAA with its newly deployed HIMARS is a strictly bilateral affair between those two conflict participants, and that Moscow would – as it’s continually displayed a propensity for doing – turn the other way for all practical intents and purposes and only issue political statements of support for its on-the-ground ally.

Therefore, the outcome of the Dash for Deir az-Zor will depend on the speed with which the SAA can reach their destination, the tactical maneuvers that the SDF-YPG take to beat them there from the northern direction, and the degree to which the US will be successful in using HIMARS to tip the balance in its favor from the southern front. The odds are overwhelming, but it still can’t be ruled out that the SAA will ultimately prevail against this pincer strategy, liberate the desert city, and drive a stake in the heart of the US’ attempts to set up two “geopolitical ‘Israels’” in the heart of the Mideast, though the prospects of this optimistic scenario playing out are admittedly low.

Andrew Korybko is a political analyst, journalist and a regular contributor to several online journals, as well as a member of the expert council for the Institute of Strategic Studies and Predictions at the People’s Friendship University of Russia. He specializes in Russian affairs and geopolitics, specifically the US strategy in Eurasia. The views expressed in this article are author’s own. It does not reflect Global Village Space Editorial policy.