In 2011, US and European policy think tanks, which both create and promote policy serving the collective interests of the corporations that sponsor them, promoted NATO military intervention in Libya. Under the guise of a humanitarian intervention, what unfolded was the long-planned overthrow of the Libyan government, then headed by Muammar Ghaddafi. 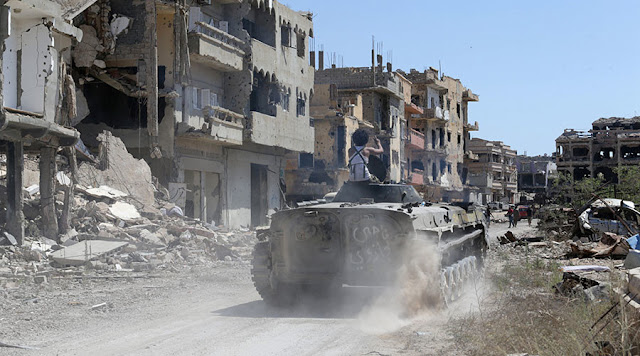 Unable or unwilling to commit significant ground troops, the majority of the fighting was carried out by militant groups with NATO air and covert ground support. Many of these militant groups would be later revealed as comprised of extremists, including Al Qaeda and its affiliates.

In essence, NATO overthrew a unifying government in Libya, placed entire regions of the fractured nation under the control of terrorist organizations and opposing militant groups, and allowed the nation to slid into chaos ever since.

The consequences of overthrowing the Libyan government in 2011 were well known long before the intervention even took place. Libya's role as a destination for refugees and migrants fleeing socioeconomic turmoil across Africa was long-established. After NATO's intervention, Libya has now become a springboard for those fleeing from across Africa, across the Mediterranean Sea, and into Europe.


The issue of pirates, smuggling, organized crime and many other ills the Libyan government had kept under control, have also predictably spiraled out of control.


Now, those same policy think tanks that promoted the Libyan intervention, lament over the catastrophe that has continued to unfold ever since.

Foreign Affairs, published by one of the most prominent of these policy think tanks, the Council on Foreign Affairs (CFR), has published a series of articles by various authors, illustrating a sort of "buyers remorse" regarding the now devastated North African state. Part historical revision, part spin and part shifting of blame, articles like, "Europe's Libya Problem: How to Stem the Flow of Migrants," go into great detail about the problems now facing Libya and its neighbors.


Nearly 11,000 migrants arrived on Italian shores in just the last five days of June, following nearly 80,000 in the first half of 2017. Over 2,000 have perished at sea since the start of this year. The vast majority came from sub-Saharan Africa and embarked from the Libyan coast.

It then notes how Europe has been attempting to deal with the ongoing migrant crisis, claiming:


The European Union (EU) has been searching for a way to stem the flow of migrants and handle the tens of thousands who arrive in Italy on a daily basis. The EU’s current policy approach aims to shut off the route through the central Mediterranean and strengthen Libyan coastal patrol and enforcement capacities at sea. But it is unlikely to be effective or humane, given the sheer volume of migrants and the number of groups that profit from trafficking them, not to mention the weakness of the Libyan navy and other official security structures.

The article concludes, offering no practical means of stemming the crisis besides waiting for the next Ghaddafi to unite Libya's currently warring factions, eliminate or confine Western-sponsored terrorist organizations mainly based in the east, particularly in Benghazi, and rebuilding the nation's economy to once again offer incentives for refugees and migrants to live and work in Libya rather than travelling onward toward Europe.

Nowhere in Foreign Affairs' article is it mentions that the only reason Libya is now in chaos is not despite NATO military intervention, but because of it.

Unifying Libya will be difficult. Another Foreign Affairs article, titled, "Filling the Vacuum in Libya: The Need for a Political, Not Military Solution," admits just how fractured the nation is:


The GNA [Government of National Accord] barely controls the capital, Tripoli, through militias that are only nominally under its authority. Although the GNA recently succeeded in pushing a rump government—containing remnants of the Islamist-dominated parliament that was elected in 2012—out of the capital, it was long in coming, and these rival factions continue to prove a threat to Tripoli.

Meanwhile, in the eastern part of the country, Field Marshal Khalifa Haftar, a former military officer under Qaddafi, and his Libyan National Army (LNA)—a coalition largely made up of eastern, anti-Islamist militias—are aligned with the House of Representatives, which refuses to recognize the GNA.

Foreign Affairs notes the rising political as well as military prominence of Field Marshal Khalifa Haftar, a "strongman" who appears to have the most potential of creating anything resembling a unified Libya. However, that will leave Libya once again in the same position it found itself before the 2011 intervention, with a strongman running the nation, and likely to drift further and further away from US and European interests until yet another proxy war is engineered, promoted by think tanks like the CFR and fought.

Again, despite Foreign Affairs' apparently in-depth analysis, it failed to isolate the true source of Libya's upheaval and instability, NATO. It was the 2011 intervention that upended stability not only in Libya, but created a chain reaction of violence and chaos that was felt as far west as Nigeria, Mali and Niger. This violence prompted, or more accurately, served as a pretext for the reintroduction of French troops in several of its "former" colonies. It has also served as a pretext for US Africa Command's (AFRICOM) continued expansion.

Ultimately, Libya is a showcase of the chaos and regression that NATO intervention brings, and serves as the greatest case for isolating, containing and by all means, opposing and obstructing further use of NATO military forces anywhere beyond NATO's own borders. The enduring chaos that is currently consuming nations like Libya also serve as a warning of what awaits nations like Syria and beyond should they fail in dissuading the West from further intervention within their borders.

It has been 6 years since NATO divided and destroyed Libya and the nation still remains fractured and fighting. The notion that NATO and its Western membership hold the solution to problems the West itself intentionally created should not be entertained, and, if international organizations, courts and laws had any meaning, NATO would be barred from any further role regarding Libya, beyond paying reparations for what it has done.