On one hand, the United States is demanding that Iranian-backed militias "leave" Iraq, claiming the fight against the self-titled "Islamic State" (IS) is over. On the other hand, the US and its European partners are still funneling weapons, cash, direct military support and organizing training for Kurdish factions in Iraq's northern region to "beat back" IS. 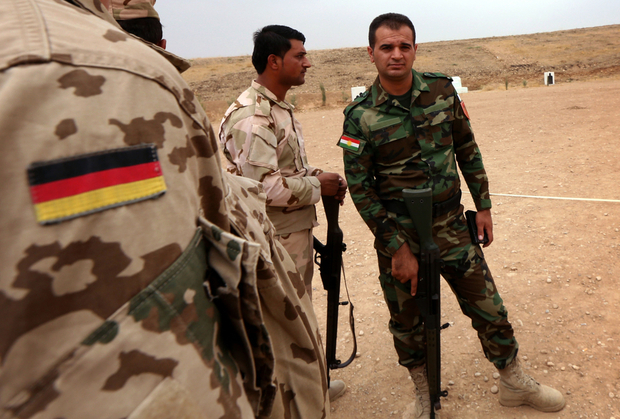 In other words, the United States is attempting to claim IS is both defeated and also yet to be defeated, attempting to craft a narrative that excludes Iraqi cooperation with Iran, Syria and Russia who are also operating in the region against IS and other militants, and gives the US and its partners exclusive control over Iraq and its future.


CNN in its article, "Tillerson: Time for Iranian-backed militias to leave Iraq," would claim:


US Secretary of State Rex Tillerson, anticipating an end to the fight against ISIS, said Sunday it was time for Iranian-backed militias to exit the war-torn nation of Iraq.

And while Secretary Tillerson notes that the Iraqi people should be allowed to rebuild their lives "with the help of their neighbors," he apparently means, all of the Iraqi people's neighbors except Iran and Syria. 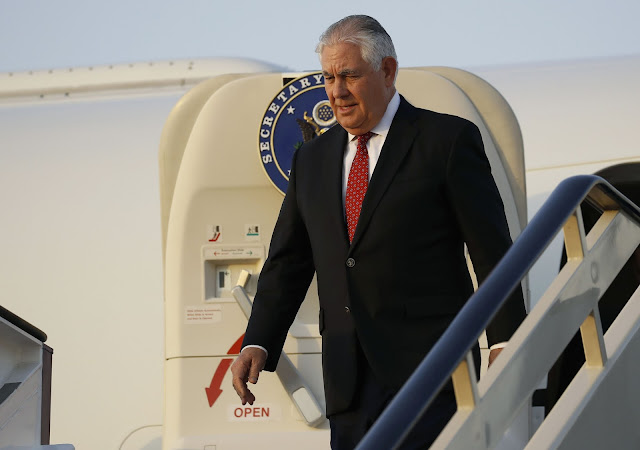 Secretary Tillerson's remarks were made in Riyadh, Saudi Arabia, giving a significant clue as to which neighbors he meant Iraq should get help from. However, it was Saudi Arabia who provided the very militants the Iraqi people have been fighting with arms, cash, equipment and training in the first place.

CNN would even note that:


At the same time, at least 1,500 Saudis had traveled to Iraq and Syria to join ISIS over the years, and Baghdad had long accused Saudi Arabia of turning a blind eye to Sunni militants crossing its territory to enter Iraq to take part in the country's sectarian conflict.

In 2007, the US military reported that around 40% of all foreign militants targeting US troops and Iraqi civilians and security forces had come from Saudi Arabia. Half of the Saudi fighters who arrived in Iraq during that time went there to be suicide bombers, the US military said.

What this apparent contradiction indicates is that the conflict in Iraq was never about defeating a spontaneous militant threat, but was instead a proxy conflict engineered by Washington with the help of partners like Riyadh, aimed against Tehran and its allies.

Kurdistan, the Other "IS"

If IS and other militant organizations fighting in Iraq and neighboring Syria represent one proxy of US, European and Persian Gulf interests, the Kurdish factions in northern Iraq seeking to carve out an independent "Kurdistan" are another.

Similarly, US and European governments are insisting that Iraqi militias begin standing down, even as US-European support for certain Kurdish factions not only continues, but expands.

Germany's Deutsche Welle (DW) in an article titled, "German army restarts training Iraqi Kurds, but future of mission in doubt," would report that:


The German army on Sunday announced it has restarted training Iraqi Kurdish peshmerga fighters, despite a political and military conflict between the autonomous region and Baghdad.

The Bundeswehr has been training and supplying weapons to the peshmerga for three years to help the Iraqi Kurds beat back the "Islamic State" (IS).

It has provided some 32,000 assault rifles and machine guns, as well as the MILAN anti-tank missile, valued at some €90 million ($106 million) since September 2014. Some 150 Bundeswehr troops are in northern Iraq, and peshmerga units have also received training in Germany.

But the training mission was suspended for a week after the central government in Baghdad, backed by Iranian-trained paramilitary groups, moved to reassert control over disputed territories the Kurds have captured since June 2014.

However, if  "Iranian-trained paramilitary groups" are reasserting control over disputed territories the Kurds have captured since June 2014, this means unequivocally that the threat of IS has been removed from the region and thus German military support is either unwarranted, or was never fully intended to combat IS, simply appear as doing as much while bolstering yet another proxy force to confront and conflict with Iraq's central government. 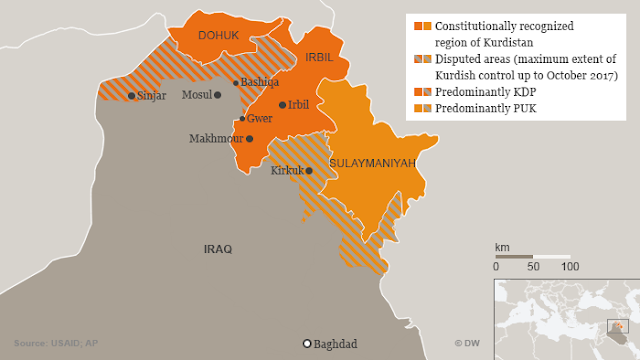 DW's report also included an interesting map. On it depicts "Kurdistan" as a diminutive region clinging to the northern borders of Iraq, divided between the Kurdistan Democratic Party (KDP) and Patriotic Union of Kurdistan (PUK) factions. It resembles not the foundation for a future, functional, independent nation-state, but rather a divided and weak proxy that will be forever dependent on its foreign sponsors.

In other words, "Kurdistan" is little more than a vector through which the US and its partners seek to divide, weaken and assume hegemony over both the nation, and throughout the region.

More honest politicians and commentators, quoted in the DW article, note that there is little logic in continuing Germany's support for Kurdish militias if the true objective was indeed fighting IS. However, it appears that the US will attempt to use willing Kurdish factions as proxies against Baghdad and to a greater extent, against Tehran, for as long as certain Kurdish leaders allow them to.

Attempts to frame "Kurdistan" as an issue of "independence" and "self-determination" fall flat upon examining that actual sociopolitical, economic and military landscape of Iraq's northern reaches. It is clear, that for now, the future of the Kurds is being determined by Washington and its partners, not the Kurds themselves. But it will be primarily the Kurds themselves who pay the highest price in this ongoing political game, along with militias and soldiers representing Baghdad they are arrayed against to fight.

It is little secret that the US seeks to divide both Syria and Iraq along sectarian lines. US policymakers at think tanks like the Brookings Institution have literally published papers with titles like, "Deconstructing Syria: A new strategy for America’s most hopeless war," detailing just how such divisions can be cultivated.

Such divisions diminish both nations further in their ability to influence their own destiny, let alone influence the region. With the US attempting to take control of Iraq's western highways to reinforce a "Sunni" sphere of influence, while it arms, trains and backs Kurds in the north, the three-way partitioning of Iraq is still clearly at the center of US policy. IS, it appears, was merely a catalyst, one intentionally introduced, but one that has almost run its course.

One wonders what "catalyst" the US will turn to next, and seems content for now pretending IS both exists and doesn't exist. But what there is little doubt of is that Washington and its partners still eagerly seek to move forward their agenda, continuing to weaken the region in an attempt to reassert its control over it.