Reorganising Afghanistan's army in the same manner the US reorganised Iraq's will lead to the same predictable rise in conflict. If the US knows this, does this mean US policymakers are intentionally undermining Afghanistan's national security?

It’s curious that American advisers in Afghanistan, while citing the decisions adopted at the International Conference on Afghanistan of 2011, as well as NATO’s Chicago summit of 2012, are now forcing Kabul to reorganize its law enforcement agencies. According to their proposal, this “reorganization,” which should begin in early 2018, must result in the reduction of Afghan army troops from its present level of 172,000 to just 136,000. 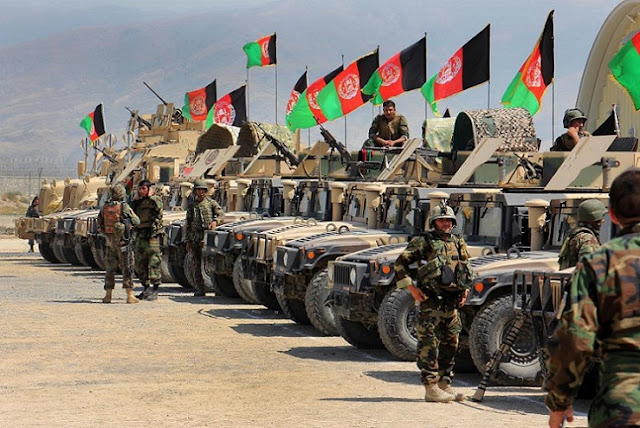 Although current president of Afghanistan, Ashraf Ghani, would decide to postpone the implementation of the above mentioned measures until a ceasefire agreement is signed with the Taliban, American advisers would force the Afghan government to adopt the so-called “legislative decree” last September anyway, changing the status of Afghan servicemen. It’s pretty clear that NATO is going to push the so-called “reorganization” of Afghan armed forces with or without Kabul’s consent. However, while a full-scale war is raging across Afghanistan, any attempts to weaken Kabul’s military capabilities looks questionable, so it comes as no surprise that Afghan officials are describing the so-called “reorganization” of their forces as an unacceptable measure that will undermine Afghan national security.

To better understand how these recently introduced measures affect the situation on the ground, it is important to take a brief look at them. To date, officers would be able to occupy commanding positions within security forces until the age of 65. But now a limit is set at 50 years (for junior officers) and 58-65 years for generals. At the same time, no officer would be able to occupy the same position for more than 8 years.

It is expected that in the next 18 months, up to 5,500 officers older than 48 years will be dismissed from the army. As for national security agencies – they will lose more than 7,000 experienced employees, while the police will have to sacrifice up to 11,000 officers. There can be no second opinions about the way these changes will affect the struggle against terrorists and drug warlords in Afghanistan.

Although NATO advisers are trying to escape criticism by pointing out that they are not necessarily trying to bring Afghan forces in line with NATO standards, as similar rules are now being used by Indian Armed Forces, but it doesn’t take a geopolitical analyst to compare the internal situation in Afghanistan and India, so any attempts to justify the enforced reorganization by “India’s example” are hardly appropriate.

Therefore, the wave of sharp criticism that Ashraf Ghani faced upon signing this “legislative decree” is hardly surprising, as it has not just outraged the Afghan military, but also a large number of representatives of various political circles. For example, Mirdad Najrabi, chairman of parliament’s security commission described the president’s decision as premature, while a member of the parliament and a former general, Nazifa Zaki, has stressed that young generals do not have the experience to manage military operations, which will result in the collapse of the armed forces. Speaker of the House Abdul Rauf Ibrahimi has also stressed that the resignation of generals under present conditions is at best premature. The same amount of criticism of the said “decree” has been voiced in the upper house of parliament as well.

Nevertheless, American advisers expect to resolve all problems in the Afghan parliament through a number of high-profile figures within it that enjoy extensive influence as well as abusing financial schemes.

As for the position of President Ashraf Ghani on this issue, one should not forget that as it’s been repeatedly pointed out by the Mashregh local media source, he has come to power largely due to his blind loyalty to Washington, in which he surpassed most of his fellow politicians. Back in 2009, The New York Times would describe Ghani as the most pro-West candidate during the presidential elections in Afghanistan. Until recently, Ashraf Ghani was a member of the Atlantic Council of the United States and was a member of the Institute for State Effectiveness, which is based in Washington.

Since the invasion of Afghanistan, Ashraf Ghani has been an important adviser to US policymakers in that country. However, according to Professor Mohammad Jamil Hanifi of Michigan University, the achievements of Ashraf Ghani are no different than those that Afghan warlords made when collaborating with British forces during the first Anglo-Afghan war and between 1929-1930.

Despite the fact that Ashraf Ghani was Afghanistan’s Treasury Minister for several years, one of his weaknesses is a lack of sufficient knowledge about the situation on the ground. He looks at the real problems of the country through the prism of Western publications. In addition, Ashraf Ghani has spent most of his life in the West, working for Western organizations, while showing little to no concern over the hardship of the Afghan people. The fact that during his election campaign, Ashraf Ghani used an American adviser to assist him in learning his own country better, speaks for itself.

There’s little doubt that the Afghan people are much better versed in the ways of reforming their own security forces. But we must not forget that similar attempts by Washington to “assist Iraq in improving its armed forces” resulted in the creation of ISIS, formed by sacked officers of Saddam Husein’s army.

Therefore, before conducting an “optimization” in Afghanistan, US advisers must answer the question whether they are pushing Afghan military commanders to form yet another terrorist group if they are not able to perform their duties within the existing security forces.

Or maybe that’s what Washington is after, striving to redraw the Near and Middle East in accordance to its own plans. It has not just created Al-Qaeda to use against the USSR in Afghanistan, but has had an extensive amount of links with ISIS as well. Maybe the Pentagon wants a new toy to play with?