In 2010, Thailand was the scene of a smaller-scale foreign-backed destabilisation similar to those carried out by the United States and Europe against nations like Libya, Syria, Yemen and Ukraine from 2011 onward. 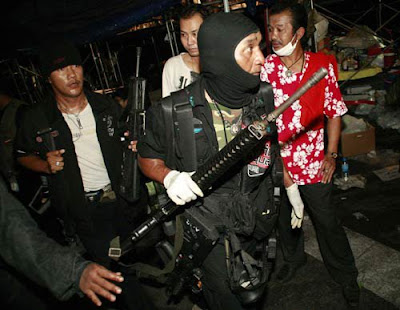 Between April and May of that year, nearly 100 would die and many more injured when US-backed former prime minister Thaksin Shinawatra attempted to seize back power through violent street protests, armed insurrection, terrorism and nationwide arson.

Just as has been done in nations like Libya, Syria, Yemen and Ukraine, Human Rights Watch (HRW), funded by convicted financial criminal George Soros' Open Society Foundation, would leverage human rights in an attempt to depict the Thai government as "cracking down" on what it attempted to depict as peaceful, unarmed protesters.

Yet in HRW's own 2011 report titled, "Descent into Chaos Thailand’s 2010 Red Shirt Protests and the Government Crackdown," it would have to admit that protesters were only "mostly unarmed," a euphemism used to cover up the fact that heavily armed militants were present and were the primary trigger for the weeks of violence that unfolded.

The report would slip in admissions to this in between lopsided condemnation of the Thai military's response to these "mostly unarmed protesters," including a description of the first episode of violence to break out on April 10, 2010.

The report would admit (my emphasis):


As the army attempted to move on the camp, they were confronted by well-armed men who fired M16 and AK-47 assault rifles at them, particularly at the Khok Wua intersection on Rajdamnoen Road. They also fired grenades from M79s and threw M67 hand grenades at the soldiers. News footage and videos taken by protesters and tourists show several soldiers lying unconscious and bleeding on the ground, as well as armed men operating with a high degree of coordination and military skills. According to some accounts, they specifically aimed at the commanding officers of the army units involved in the crowd dispersal operations, sowing panic among the soldiers. Human Rights Watch investigations concluded this group consisted of Black Shirts deployed among the UDD protesters.

HRW would further describe the "Black Shirts" as:


Members of these armed groups were captured on photographs and film armed with various military weapons, including AK-47 and M16 assault rifles, as well as M79 grenade launchers, during their clashes with government security forces.

The HRW report includes several reports made by Western journalists at that time, many of whom would later downplay or cover up the role of the "Black Shirts" during the 2010 violence.


The most recent example of this is a July 23, 2018 HRW article titled, "Silencing a Witness to Thailand’s Deadly 2010 Crackdown." This "witness" is an unabashed supporter of Thaksin Shinawatra and his violent street front, the United Front for Democracy Against Dictatorship (UDD) or "red shirts." 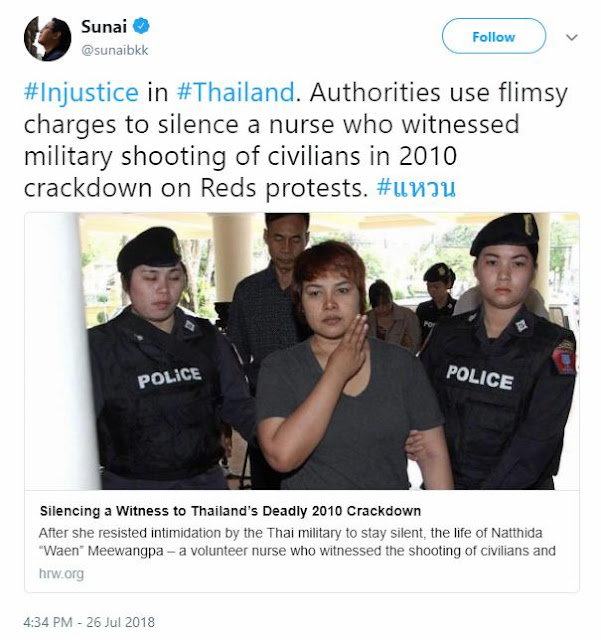 The picture of  Natthida “Waen” Meewangpa used by HRW in its July 23 article depicts her flashing the three-finger salute used by US-funded and backed anti-government agitators currently attempting to undermine and overthrow the Thai government and reinstall Shinawatra to power.


After she resisted intimidation by the Thai military to stay silent, the life of Natthida “Waen” Meewangpa – a volunteer nurse who witnessed the shooting of civilians and unarmed supporters of protesting “Red Shirts” by soldiers during the 2010 political confrontations in Bangkok – has turned to hell.

HRW would not only link to its 2011 report, indifferent to the possibility that readers might read HRW's own admissions that the violence was in fact triggered by armed terrorists, not a military "crackdown," it also concludes by claiming:


So long as Natthida remains locked up, there is little prospect of justice for the victims of one of Thailand’s bloodiest episodes. Worse still, soldiers and their commanders will have good reason to believe that next time around, they can again get away with murder.

Yet the violence HRW is referring to and that Meewangpa claims to have witnessed, is depicted in concise detail in HRW's own 2011 report. It involved multiple gun battles between Thai troops and pro-Shinawatra terrorists around the downtown temple of  Pathum Wanaram.

HRW in their 2011 report would admit (my emphasis):


The “safe zone” at the temple was not in a very safe location. Wat Phatum Wanaram is very close to the Central World shopping complex, which Red Shirt arsonists were torching at the same time as crowds were fleeing into the temple. Throughout the afternoon and evening of May 19, sporadic gunfire and clashes took place in the immediate vicinity of the temple. Several foreign journalists said they saw UDD militants, some of them armed, on the street outside the temple between 2 and 4 p.m. that day.

HRW's report would include testimony from Andy Buncome, a journalist for the Independent. He would be quoted as saying (my emphasis):


Around lunch time, the Red Shirt leaders said that it was all over, and asked people to go home. I went out again and probably got to the temple around 3:30 to 4 p.m. Things were calm then, but tense. Some of the malls had been set on fire.…Then we heard very clear shooting. Other reporters said that the troops and Red Shirts were shooting at each other. We remained at the rear of the temple. We knew there was a curfew. So we started heading out, but we paused and went back to try and get a phone number of a monk so we could call him later. As we were leaving around 5:30, the shooting got going again. My colleagues ran to the back, but I was caught in the front, taking cover with other people. I remember thinking that I should get out of there. I was watching the number of injured pouring into the temple from outside.

I don’t know how I was hit or where the bullet came from. I was lying down. I could not really see the gun battle, I could only hear it. There was vast gunfire outside. The Red Shirts with guns, I think, were out in the streets. Maybe when the army was firing back at them, some of it was coming back into the temple. I could see some bullets ricocheting off the walls. It is hard to know. I could see where some of the shots were hitting and would therefore have to guess some of them were coming from the west.

In other words, the shooting around the temple was not a "crackdown," it was very clearly a gun battle between armed terrorists and Thai troops. The resulting injuries, as was the case throughout the entirety of the violence, was a result of bystanders caught in the crossfire. HRW in 2011 admitted as much. HRW today, is attempting to gloss over this fact.

To depict security operations against heavily armed terrorists waging war against government troops in a nation's capital as a "deadly crackdown" is transparently inaccurate and intentionally dishonest.

HRW, a foreign-funded front with a transparent agenda of leveraging human rights advocacy to advance the political agendas of the special interests funding it, is clearly revisiting and revising its own account of this episode of 2010 violence for political reasons.

Transforming Meewangpa from a supporter of Shinawatra and his terrorist proxies into a political prisoner and alleged "victim" of the current Thai government which HRW clearly opposes and works daily to undermine, is done in the same vein as depicting ultra right wing fascist in Ukraine as democratic and hardcore terrorists in Syria as freedom fighters.

HRW's dishonesty is not only a danger to the stability of nations like Thailand inviting future episodes of instability and violence, it is a danger to legitimate human rights advocacy everywhere.

It is a danger nations cannot afford to ignore. While arresting or expelling such groups is the most direct method, creating wider public awareness of real human rights advocacy versus the politically-motivated use of it by organisations like Human Rights Watch would be far more effective.

It would also be justified to strip organisations like Human Rights Watch of any credentials it may hold in regards to human rights advocacy.

Revising Thai nongovernmental organisation (NGO) laws to force foreign-funded organisations to provide more transparency into their funding, and having those clearly engaged in political meddling register as lobbyists instead of NGOs would deny them the opportunity to cry "censorship" while drastically undermining their perceived legitimacy.

Thailand possessing its own English-language news service in the same vein as Russia's RT or China's CGTN would give Thailand the ability to have its own side of the story told, a story that would not only contradict Human Rights Watch's, but also expose and challenge HRW's abuse of human rights advocacy.