China recently opened yet another high-speed rail line, this one linking Hong Kong to China's mainland, cutting the trip to Beijing from 24 hours to just 9. 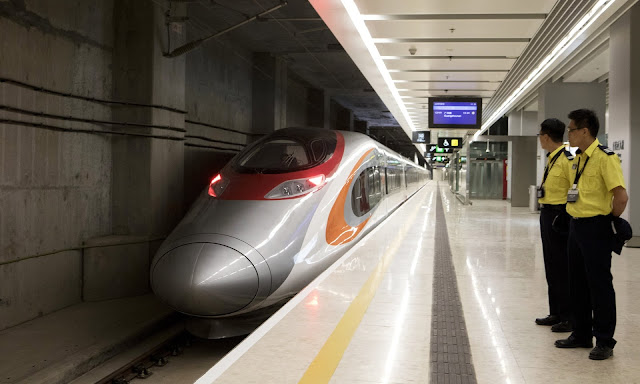 Yet progress made by China in expanding what is already the largest high-speed rail network in the world, has been decried by Western media organisations. AFP in their article, "Fear and fanfare as Hong Kong launches China rail link," would transform the accomplishment into controversy, claiming:


A new high-speed rail link between Hong Kong and mainland China launched Sunday, a multi-billion dollar project that critics say gives away part of the city's territory to an increasingly assertive Beijing.

Chinese security have been stationed in semi-autonomous Hong Kong for the first time at the harbourfront West Kowloon rail terminus, as part of a new "special port area" that is subject to mainland law.


Under Hong Kong's mini-constitution -- the Basic Law -- China's national laws do not apply to the city apart from in limited areas, including defence.

Hong Kong also enjoys rights unseen on the mainland, including freedom of speech, protected by a deal made before the city was handed back to China by Britain in 1997. But there are growing fears those liberties are being eroded.

AFP's story is part of a wider US-European narrative aimed at driving a wedge between Hong Kong and Beijing, the latter of which resumed control over the territory after nearly 140 years of British colonial rule.

"Basic Law" is a leftover of British domination and remains key to maintaining Anglo-American influence within Chinese territory. This includes providing protection to US and European funded opposition fronts who carried out short-lived protests in 2014 and now lead what is ironically called an "independence movement," seeking independence from Beijing, but entirely dependent on Washington and Hong Kong's former colonial rulers in London.


AFP cited Claudia Mo, a Hong Kong politician who formally worked for AFP (a potential conflict of interest not disclosed in the AFP article). The article would claim:


Opponents warn that giving away control of land in the heart of Hong Kong is a dangerous precedent as Beijing seeks to tighten its grip on the city following mass pro-democracy protests in 2014 and the emergence of an independence movement.

"It's almost like an imperialist attitude on the part of Beijing," pro-democracy lawmaker Claudia Mo told AFP.

There are also questions over how Hong Kong citizens will be required to behave in the zones subject to Chinese law, whether they will be punished for using Facebook and Twitter -- banned on the mainland -- or targeted for wearing clothing with political slogans.

Mo's choice of words were particularly ironic considering her support of "Basic Law" and her opposition to what is called "mainlandisation," a movement seeking to preserve Hong Kong from mainland China's influence. It is in essence a movement to preserve Hong Kong's British imperial legacy and every bit pro-imperialist in reality as she claims Beijing's policies are in fiction.

China's reasserting itself over its own territory, stripped from it by British imperialism, is the exact opposite of an "imperialist attitude."

The high-speed rail line represents just one of many aspects of modern China and its ability to influence not only the shape of its own development, but also its ability to challenge and even displace Western influence beyond its borders, particularly across Asia.

For Hong Kong, China's economic development offers tangible progress ordinary people can see and touch. When compared to the ambiguous notions of "democracy" and "freedom" offered by political groups funded and supported by Western nations who have no genuine interest in either, the complete and irreversible supplanting of "Basic Law" is all but inevitable.

Waning Anglo-American influence in Asia, particularly over China, has spurred US provocations in the South China Sea, the UK to vow Asia as the first region its new aircraft carrier HMS Queen Elizabeth will begin menacing and the beginnings of a growing trade war between the the US and China. It is within this context that US-UK support for Hong Kong's pro-Western political parties should be viewed, not as an ideological partnership promoting freedom and democracy, but an attempt by old imperial powers to reassert themselves in Asia by merely hiding behind such values.