Elections are set to be held sometime in early 2019 for the Southeast Asian Kingdom of Thailand. 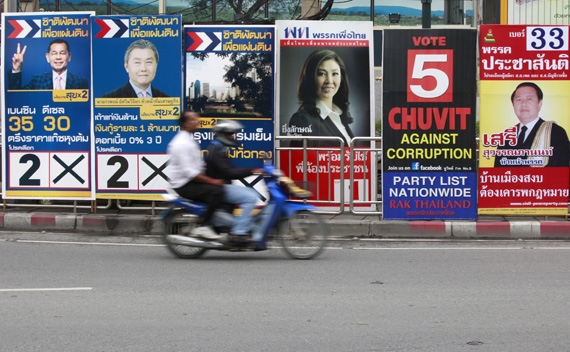 The nation has struggled with political instability since former police colonel-turned-billionaire Thaksin Shinawatra came to power in 2001. Two military coups, one in 2006 and another in 2014, have unfolded in attempt to remove Shinawatra and his political party from power after indulging in unprecedented corruption, abuse of power and human rights violations.

Shinawatra, his sister who sat as prime minister for him from 2011 to 2014 and several other prominent members of his political party now reside abroad in Europe and the United Arab Emirates. Shinawatra and his political allies have repeatedly used violence as a tool to seize back power, resulting in headline-grabbing episodes of bloodshed in 2009, 2010 and again in 2014.

Key to Shinawatra's political staying power is the immense support he receives from the United States, Europe and their collective influence over global media. Returning Shinawatra to power and pivoting Bangkok away from its growing ties to Beijing and back toward Wall Street and Washington has been a major priority of the US State Department and its functionaries in Southeast Asia for now nearly two decades.

"Pro-Democracy Forces" Represent a Fugitive and his Foreign Sponsors

Thaksin Shinawatra lives abroad to evade multiple arrest warrants, myriad pending criminal cases and a criminal conviction coupled with a two year jail sentence handed down by Thai courts. His status as a fugitive clearly bars him from running for or holding public office.

Despite this restriction he still openly runs Thailand's main opposition party, Pheu Thai. Fearing that Pheu Thai may be disbanded for this very fact before next year's elections, it appears he had created a multitude of other parties to create a front he hopes to use to win elections and restore himself to power.

This includes billionaire heir Thanathorn Juangroongruangkit's Future Forward Party which has repeatedly denied any ties to Thaksin Shinawatra despite Thanathorn himself admitting during an FCCT event that he had previously supported Shinawatra's Pheu Thai Party in 2011 and participated in Shinawatra's various, deadly "red shirt" street protests. Also relevant is Thanathorn's uncle working as a senior minister in Shinawatra's previous governments and Thanathorn's family owning the notoriously pro-Shinawatra Matichon Media Group which includes the Matichon and Khaosod newspapers.

Additionally, the 2018 Concordia annual summit invited Thanathorn to speak in September. Concordia is chaired by notorious figures among the US business, political and intelligence communities as well as a senior minister in Thaksin Shinawatra's government, Suwat Liptapanlop.

Future Forward itself is co-founded by one of Shinawatra's lobbyists, Piyabutr Saengkanokkul, who as part of the supposedly academic activist group "Nitirat" held indoor rallies for Shinawatra's "red shirt" street front. Future Forward also boasts co-founders who head a variety of US and European-funded fronts posing as NGOs.

As if to lay to rest any doubts, Thaksin Shinawatra himself would comment to the media recently that the strategy he hopes overcomes his opponents at next year's polls will be "pro-democracy forces" forming an alliance and taking power.


An alliance of pro-democracy parties would defeat pro-military parties in the upcoming general election if it is held freely and fairly, ousted former Prime Minister Thaksin Shinawatra said Thursday.

Of course, in a truly free and fair election, a fugitive and his proxies could not possibly contend elections let alone win them and then form a government afterwards, a fact intentionally and repeatedly omitted from news articles across the West.

In the interview, Thaksin Shinawatra all but admits he has created multiple parties to mitigate the political damage if any one is singled out and disbanded for its illegal associations with him, meaning that the participation of any of these parties in upcoming elections renders them most certainly "unfair."

Thailand is not the Only Target

US meddling across Asia has sought for decades to encircle and contain China in an attempt to preserve American primacy in the region and around the globe.

The so-called "Pentagon Papers" released publicly in 1971 made it clear that US engagement across Asia sought to contain China on at least three fronts; the Japan-Korea front, the India-Pakistan front  and the Southeast Asia front. It was admitted that the Vietnam War was a part of this effort.

Ample analysis in contemporary times illustrates that this agenda has changed very little in structure since the papers were actually written between 1945 to 1967. The US maintains a military presence in both Japan and South Korea to this very day as part of the "Japan-Korea front."


The recent US-Indian 2+2 talks, for New Delhi, appeared to be an effort to balance its international relations, while on Washington's side, it was clearly an attempt to further recruit India in the ongoing American campaign to contain China, constituting the "India-Pakistan front."

On the "Southeast Asia front," the US is deeply involved in large-scale political meddling where it cultivates and promotes entire opposition movements and backs whole political parties seeking to co-opt the civilian leadership of each nation in the region.

In Cambodia, the US virtually ran the opposition party out of Washington D.C. In Malaysia, a large segment of the victorious opposition party enjoyed open and substantial US funding and support. US government-funded fronts posing as "nongovernmental organisations" (NGOs) in Myanmar have fully leveraged ethnic violence to apply pressure on both Myanmar's civilian and military leadership to reverse growing ties between Naypyidaw and Beijing.

Thailand Obstructs US Primacy in Asia

Thailand represents a significant prize for US ambitions. It is a nation with nearly 70 million people and represents the second largest economy in Southeast Asia. It is geographically located at the centre of Southeast Asia and is a central partner for China's ambitious One Belt, One Road project in the region.

The current Thai government has systematically strengthened ties between Bangkok and Beijing through a series of major weapon deals and contracts signed regarding infrastructure projects, including a major high-speed rail network within Thailand and connecting Thailand to China via Laos.

It appears that a victory for Washington-backed, Shinawatra-controlled political proxies in Thailand would result in the same backtracking Malaysia is now doing in regards to growing ties with China.

Thanathorn's Future Forward Party has already expressed interest in cancelling joint Thai-Chinese rail projects in favour of US technology including the Hyperloop of which a single functional and publicly used kilometre does not exist, as reported in Bloomberg's article, "Thailand needs hyperloop, not China-built high-speed rail: Thanathorn."

Future Forward's nonexistent "alternative" is offered simply as padding for what is otherwise a politically-motivated decision to cancel essential infrastructure projects and cripple national and regional development. Clues like this help us see that Washington's containment of China also equates to the containment of a free and prosperous Asia as a whole, where real development is obstructed at every possible opportunity.

We can expect US and European media to ramp up its public relations work on behalf of Thaksin Shinawatra and his myriad political proxies including transparent appendages of Shinawatra's political machine like Future Forward. These PR efforts include smearing the current government and undermining Thailand's institutions including its military and constitutional monarchy. It also includes media-wide omissions of Shinawatra's status as a fugitive and the implications it has on the political parties he openly leads.

The media is already preparing the tried and proven technique of declaring the Western-backed opposition victorious even months before the elections are to be held, leaving "vote rigging" as the only explanation left if and when the opposition loses. This will be used, just as it has in the Middle East and Eastern Europe, as justification for violent street protests and even terrorism aimed at installing Western-backed proxies regardless of election outcomes.

The resulting instability being planned if Western-backed opposition figures do not take power threatens both Thailand and the rest of Southeast Asia. Assuring Thailand is able to confront and overcome this foreign meddling and prevail over political instability is in the best interests of Thailand's neighbours who will most certainly be next if Washington succeeds.