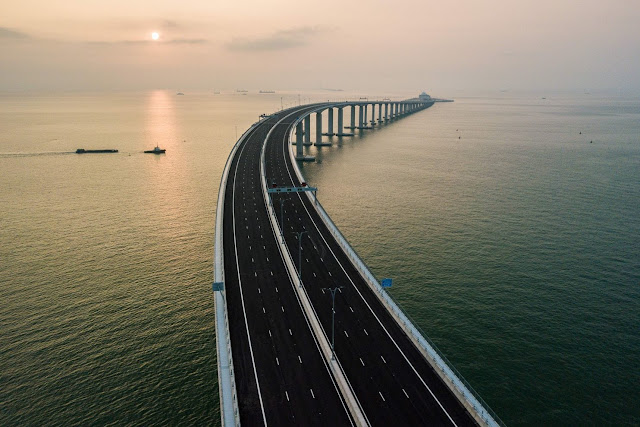 Beyond providing links to the mainland, the bridge helps form a wider bay area, connecting several cities, spurring the movement of tourists, workers and goods.

Like the recently opened Hong Kong-mainland high-speed rail line, the bridge's completion has been met with widespread derision across Anglo-American media. No fault, real or imagined, escaped mention.

It is the political implications of the bridge's construction in particular that have riled China's former colonial concerns. The bridge is yet another very tangible example of Beijing exercising its sovereignty over all of its territory, including Hong Kong, taken back from the British and Macau taken back from the Portuguese.

Moscow has done likewise with the construction of the Crimean Bridge, exercising its sovereignty over the Crimean Peninsula reunited with Russia. A similar storm of derision swept Anglo-American headlines.

Encapsulating Anglo-American protests is the Washington Post's article, "The world’s longest bridge-tunnel brings China even closer to Hong Kong. Not everyone is pleased," which claims:


The bridge’s completion comes as China under Xi is extending its grip over Hong Kong, a city of 7.4 million that was given special status when it was handed back from the British to China in 1997.

Under the “one country, two systems” policy, Hong Kong’s economic and political systems are supposed to remain untouched for 50 years — until 2047 — and distinct from mainland China’s, allowing the territory to retain its own government, judiciary, currency and so on.

A flurry of infrastructure development, however, has served to physically bind the regions in a more tangible way. In late September, an $11 billion high-speed rail link opened between Hong Kong and mainland China, cutting the time between the territory and major Chinese cities.

Beijing is undeniably consolidating its control over these territories. They were taken from China by force by European, and later American invaders, occupied and only handed over once China began its rise to economic and military parity with the West. To this day, Washington and London attempt to exert influence over Hong Kong and more consequentially, through it, in efforts to politically undermine China's mainland as well. 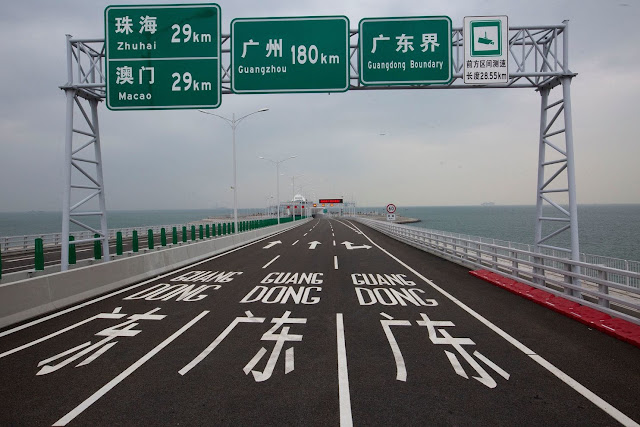 But in according to the West's own maxim of might makes right, China's mega bridge represents a steel and concrete band tying these former colonial territories tighter to the mainland, squeezing out the last dwindling influence of these foreign interests.

The Washington Post and other articles across Anglo-American media referred to their reliable stable of "pro-democracy" politicians in Hong Kong to provide the illusion of local displeasure. As with the recent Hong Kong high-speed rail link, Claudia Mo, a Hong Kong politician and former AFP reporter, would decry the new bridge as Chinese encroachment on Hong Kong.


This project is so obviously a political symbol. I’m sure Beijing knew clearly that we didn’t quite need it and that it was not necessary for the time being. The bridge is a permanent fixture and permanent reminder that Hong Kong is forever and ever connected to the vast hinterland of mainland China.

It is all connected — the reclamation, bridge, high-speed rail. It is all telling Hong Kong that you are part of China, you are very much part of it, and you can’t get out of it.

What is often overlooked by Western commentary and analysis regarding Hong Kong, however, is the fact that "pro-democracy" and "pro-independence" politicians and activists like Mo represent the vestiges of colonial occupation. Since many of these politicians and activists still receive direct support from Washington and London to engage in subverting Beijing, in many ways they also represent modern-day imperialism within Chinese territory.

The bridge, the high-speed rail, do indeed declare Hong Kong as irreversibly Chinese, and there is no getting out of it anymore than London could leave the United Kingdom. If we could imagine the Chinese government attempting to say otherwise, and through funding political subversion, protests and propaganda attempting to exert influence over and through London, we may see just how absurd Anglo-American outrage really is regarding the finality of China's emergence as a fully sovereign nation and its control, desires and will regarding its own territory.