New US Ambassador to Australia Obsessed with China 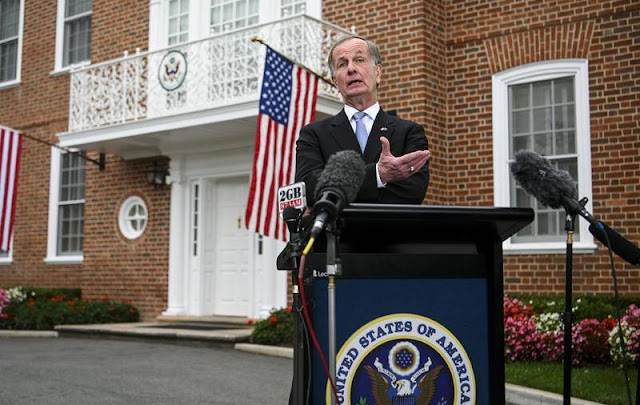 
China is using “payday loan diplomacy” to exert influence in the Pacific, the new US ambassador to Australia said on Wednesday, in comments that threaten to inflame regional tensions.

The United States and its regional allies have been battling China for greater influence in the Pacific – a region that has votes at international forums like the United Nations and controls vast swathes of a resource-rich ocean.

The geopolitical competition has seen both sides increase foreign aid to the region in recent months, which the West says is needed to prevent the Pacific falling into financial distress and becoming susceptible to diplomatic pressure from Beijing.

The Reuters article would continue by claiming:


The arrival of Culvahouse, the first US ambassador to Australia in more than two years, comes at time of bilateral tensions between Canberra and Beijing.

The article also mentions counter-pressure applied on Australia regarding coal China imports, but describes it instead as, "how Beijing is using trade to punish Canberra for its criticism," despite already admitting it is in direct retaliation for Australia's use of trade to punish China first.

The American people for whom Ambassador Culvahouse is a representative, must be perplexed over this diplomat's obsession with China rather than fulfilling his duties of representing the United States in Australia itself.

As the United States does with many other allies, it is attempting to turn Australia into a partner-proxy in Washington's own confrontation with China.

In the process of this otherwise unsustainable confrontation, Washington risks dragging Australia down with it, when Australia could instead be bilaterally resolving issues with China and building constructive relations throughout Asia-Pacific, all while redefining for itself a more positive role in the region, breaking free from its historical role as an extension of Anglo-American hegemony.

Geography 101: China is Located in Asia, the United States is Not

Interestingly enough, Reuters failed to notice that China is actually located in Asia-Pacific, while the United States is not.

Just as the US is expected to exert a certain amount of influence in North America where it is actually located, it is not unreasonable to expect China to do likewise in Asia. That US foreign policy seems formed around the notion that the US, not China, should hold primacy in Asia is both counterintuitive and fundamentally flawed.


Such a policy reflects a basic but intentional lapse in geographical awareness widespread across Western media and political circles representing the remnants of European-American imperialism of the 19th-20th centuries. It suggests that Asians lack agency to decide for themselves how "votes at international forums like the United Nations" and "vast swathes of a resource-rich ocean" should be used and that the United States should decide for them instead.


The US currently does this by attempting to surround China with client states and infecting nations across Asia with US government-funded nongovernmental organisations (NGOs). These NGOs impose upon the region US-style institutions that reflect US interests through a process the US itself calls "soft power."

Examples of this can be seen in Myanmar where US-funded NGOs have managed to bring existing ethnic tensions toward the brink of war, in Thailand where US-backed political forces are attempting to displace the military and constitutional monarchy and roll back recent progress made between Bangkok and Beijing and in Cambodia where the entire opposition is virtually run out of Washington D.C.

The more obvious results of this US "soft power" in action are ongoing "colour revolutions," but a more subtle attempt to overwrite Asian culture and institutions with US ideas and institutions is also constantly attempting to take root. It is the latest evolutionary step taken by centuries of European and now American imperialism and it is the tool of choice used by the special interests of today benefiting from this imperialism.

Ambassador Culvahouse's rhetoric and the accompanying talking points touched on by Reuters brings all of this into focus, with the US openly accusing China of usurping American primacy in Asia, and admitting it is investing across the region to regain it.

Ambassador Culvahouse had previously served President Ronald Reagan's administration between 1987 and 1989. He has also been involved in multiple committees within the Republican Party, Australia's ABC would report.

Ambassador Culvahouse is also listed as a Brookings Institution trustee, which may help explain why in his capacity as US Ambassador to Australia he is openly pursuing policy that serves neither the American nor Australian people but rather the corporate sponsors who control both Brookings' activities and those of Washington.

He is also a former chairman of O’Melveny &amp; Myers (OMM), a massive international law firm whose clients include equally massive corporations seeking to protect their existing monopolies and to find footing in emerging markets, including in China. Former OMM chairman and now Ambassador Culvahouse stepping into the middle of Australia's bout with China over 5G and Huawei and OMM's own role in cases specifically involving Huawei (e.g.), in turn represents equally massive conflicts of interest.

Ambassador Culvahouse is another stark example of "revolving door" politics in which representatives of special interests move in and out of government positions appointed to regulate and hold accountable these very interests.

The entire process that Ambassador Culvahouse represents is the modern manifestation of European-American imperialism, representing the modern equivalence of an elite minority, their greed and the mechanisms instituted to satisfy it, merely dressed up as representative governance serving the majority.

But just like every other empire in history, American hegemony rose on a global scale before beginning to fade. The vector sum of Chinese-Australian economic ties, despite recent setbacks (some might call sabotage), is positive, as noted by the Parliament of Australia itself. As China continues to grow economically, politically and even militarily within the region and upon the global stage, the US will have no choice but to concede its longstanding primacy in Asia-Pacific, a process already well underway.

Without an entirely new, innovative and constructive American foreign policy in Asia-Pacific, Ambassador Culvahouse and his rhetoric serve only to delay the continued, inevitable decline of American power and in the process, increase resentment not only from Beijing, but resentment from all the partner-proxies including Australia the US is using in the process.