Why is The Financial Times Smearing Thailand?

Southeast Asia has become a defacto battleground for the wider war waged between the United States and an emerging China. 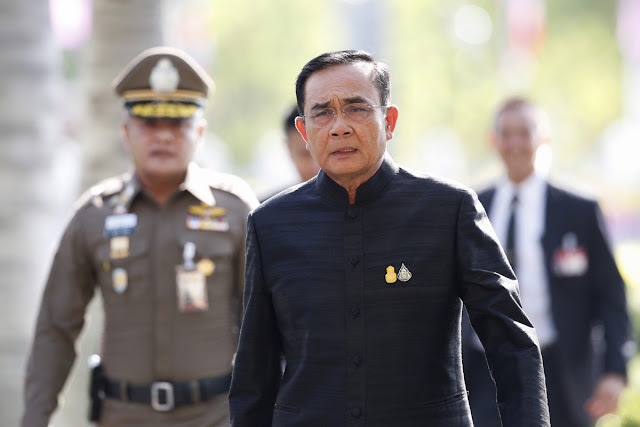 The nation of Thailand, possessing the second largest economy in ASEAN and a pivotal partner for China's Belt and Road Initiative (BRI), has just emerged from turbulent elections in which US-backed "pro-democracy" parties were defeated both at the polls and in parliament leaving Thailand's military-linked political party in control.

As previously warned, the United States has no intention of simply accepting the defeat of its political proxies in Thailand. Instead, it has shifted toward undermining political and economic stability.

The bulk of this effort comes in the form of the Western media and associated "nongovernmental organisations" (NGOs) funded by the US and Europe but operating inside of Thailand.

An example encapsulating these efforts comes to us from the Financial Times. Its article, "Thailand remains the sick man of south-east Asia," published by "FT Confidential Research" attempts to portray Thailand as especially ailing economically.

Yet the narrative and graphs constituting the article are clearly manipulated to merely give the impression of a lagging economy, intentionally taking many facts out of context and dishonestly conflating different trends with Thailand's ongoing political developments.

While we all most likely understand the ability of influential media platforms to manipulate statistics to portray virtually any reality they wish to sell the public, it is still worth looking at just how FT does this in regards to Thailand and to understand why.


Since 2014, GDP growth has limped along at an average 3.6 per cent, far slower than the other Asean 5 economies, which have expanded at rates of between 5 and 6.2 per cent in that time.

GDP growth depends on a many factors. It depends on domestic and global economics, the type of economy a nation possesses and the stage at which it is developing. More established economies have slower GDP growth. While their growth rates may be smaller than other nations, their GDP itself is larger.

For Thailand, despite having the fourth largest population in ASEAN, it possesses the second largest GDP.

It's economy and infrastructure is well developed and comparing its GDP growth to nations still in the process of achieving similar development is poor analysis.

Since the writers at FT are undoubtedly aware of this, their "poor analysis" is intentional, hoping to exploit the perceived ignorance of their readers while portraying Thailand's economy of "ailing" while conflating "limping GDP growth" with the current government.

Unless Thailand's Prime Minster Prayuth Chan-o-Cha is behind a global economic downturn, conflating his administration's policies with a decrease in exports and consumer spending is another example of FT's intentionally "poor analysis."

Worst of all, FT even admits that a weakening global economy was behind the slump, but still insists on blaming the current government for it anyway.


A weakening global economy saw Thai exports fall 2.5 per cent in the six months to April, reversing the steady growth recorded during most of 2017-18. In the five years since the coup, exports in dollar terms have averaged barely 2 per cent annual growth, while the contribution of exports to GDP has dropped by 10.1 percentage points. Private consumption has improved slightly of late but has nonetheless slipped to 47 per cent of GDP from 52 per cent over the same period.

The article continues by blaming the slump on the government anyway:


Thailand’s primary consumer confidence index hit a 19-month low in May. A more stable political situation may buoy sentiment, but many Thai consumers have doubts about the new government’s longevity. In a June survey by Thailand’s Suan Dusit Poll, 74 per cent of respondents said they did not expect the administration to survive its four-year term.

We're probably all aware of many other examples of politically-motivated "economic analysis" that intentionally conflates economic surges and slumps driven by external, or even global factors with local politicians.

A good example is the crisis in Venezuela precipitated by years of US sanctions, economic warfare and covert political subversion shamelessly and squarely blamed on the targeted Venezuelan government across the Western media.

For FT, it is clear they set out to smear the current Thai government, and simply bent statistics and trends to fit their narrative as an afterthought.

FT's "Sickman of Southeast Asia" is Admittedly Not that Sick, Says FT...

FT moves on to Thailand's growing debt. But even FT itself admits Thailand's debt is not the worst in Southeast Asia, claiming:


Public debt has risen steadily under Mr Prayuth, climbing to 34 per cent of GDP last year from 30 per cent in 2014. The credit rating agencies are not yet alarmed — Thailand has lower public debt levels than Malaysia, Indonesia or Vietnam — but debt could easily reach 40 per cent of GDP within four years.

And in all actuality, looking at the statistics across ASEAN, Thailand is hardly "the sick man of Southeast Asia." It is simply a target for the Western media to undermine because it has systematically pivoted away from Washington, London and Brussels and has increasingly built ties with significant Western rivals, most notably Beijing.

ASEAN itself has gone from a potential partner in Washington's war with Beijing, to an increasingly important ally of Beijing, as well as a bloc which is itself competing against Western interests in the region and around the globe.

Cutting to the Chase

Toward the end of the article, FT finally gets around to the real goal of its article; undermining confidence in the current Thai government and helping set the stage for potential political instability and even regime change.

It claims the current government has a "short life expectancy" and leads an unstable political coalition.

It concludes, not with any sort of relevant summation of any sort of financial or economic analysis, but by quoting a US-backed "student activist."


...Mr Prayuth faces a hardened opposition that needs just a handful of MPs to turn the tables. The risk of street protests — a hallmark of Thai politics — will also be elevated: Netiwit Chotiphatphaisal, one of Thailand’s highest-profile student activists, recently tweeted that “[we] should learn from Hong Kong”.

Netiwit is linked directly to the US-backed protests in Hong Kong. He at one point invited US-funded opposition leader Joshua Wong from Hong Kong to speak in Thailand before he was turned away upon arrival at the airport.

It should also be pointed out that the political party Netiwit promoted during Thailand's recent elections came in third, with millions fewer votes and significantly fewer seats than the military-linked Palang Pracharath Party.

What FT is alluding to then, is yet another Western-sponsored "colour revolution" led by an unpopular but loud and well-funded opposition, and with the aid of the Western media, portrayed as popular opposition.

In the near future Thailand will continue to be targeted by a steady stream of such smear pieces dressed up as economic analysis or critiques of Thailand's "human rights" and "democratic" deficits, exploiting or even inventing incidents to help undermine the nation's international standing, target its tourism industry and undermine investor confidence.

This will continue until political forces willing to steer Bangkok back into Washington's shadow take power, or until Western primacy in Asia wanes significantly to where the constant and malign propaganda produced by media organisations like FT can be soundly ignored.

In the interim, nations across Southeast Asia must invest more in combating disinformation aimed at their political and economic stability. Just as a nation would defend against armed aggression, terrorism or economic warfare aimed at either, so too must they defend against information warfare seeking to undermine both.

Nations like Thailand, being relatively smaller in the grand scheme of geopolitics and interested in maintaining a balance between larger, more powerful nations, may not wish to take on Western media disinformation head-on like Russia or China. They may opt for more indirect methods channeled through independent media platforms. They may also consider incrementally taking control away from US tech giants like Google and Facebook by developing indigenous alternatives that better serve Thailand's interests instead.

Exposing the agenda-driven "analysis" of FT's "Confidential Research" service can, in the meantime, help the public better understand what is being put in front of them and why, allowing them to conduct their own research into the state of Thailand, its political developments and its economy, or any other targeted nation for that matter.