US Meddling Continues in Cambodia, But With Setbacks 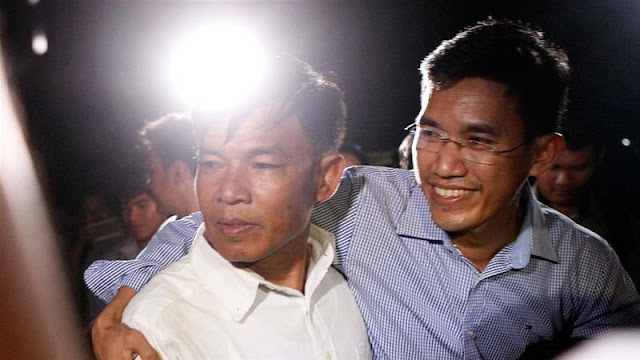 
Former Radio Free Asia (RFA) reporters Uon Chhin and Yeang Sothearin were arrested in November 2017 after a late-night police raid on an apartment rented by the former. They were accused of supplying a foreign state with information, a charge that carries a prison sentence of between seven and 15 years.

RFA, which is funded by the government of the United States, had closed its operations in Cambodia shortly before the arrests. The outlet was known for its critical coverage of the Cambodian government, including frequent reports on corruption and illegal logging.


Both Uon Chhin and Yeang Sothearin admitted at Friday's hearing that they had continued sending videos and information to RFA after it had shut down, but they denied that this constituted espionage.


Chhin and Sothearin should never have had to face these bogus espionage charges, and all judicial restrictions on them should be lifted.

HRW's Robertson made these comments unironically after celebrating and making excuses for Facebook and Twitter's censorship of accounts and individuals critical of Western impropriety (including the dubious, often hypocritical work of HRW itself) worldwide.

Cambodian courts vowed to ignore the demands of foreign organisations like HRW, insisting instead they would use evidence and Cambodian law to reach a verdict, RFA's own article on the story reported.

US Meddling in Cambodia Was Extensive

Amid continued hysteria and accusations of "Russian interference" levelled by the United States and its various functionaries against any and all opponents worldwide, the US itself has been involved in meddling in Cambodia's internal political affairs extensively.

Far from merely funding information operations like RFA, Voice of America and Cambodia Daily Cambodia has since shut down or co-opted, the US literally ran an entire political party with members operating out of Washington DC itself. It protected these proxies  from well-earned accusations and charges of sedition with fronts posing as "human rights" organisations also funded by the US government.

Cambodian National Rescue Party (CNRP) leader Kem Sokha openly admitted to Washington's role in propping up his party and its bid to seize power in Cambodia not through elections, but through the same sort of destructive colour revolutions that have swept through Eastern Europe, North Africa and the Middle East.


The Phnom Penh Post in its article, "Kem Sokha video producer closes Phnom Penh office in fear," would go over the many admissions made by Kem Sokha:


“...the USA that has assisted me, they asked me to take the model from Yugoslavia, Serbia, where they can changed the dictator Slobodan Milosevic,” he continues, referring to the former Serbian and Yugoslavian leader who resigned amid popular protests following disputed elections, and died while on trial for war crimes.


Fronts posing as "human rights" organisations operating in Cambodia and running defence for CNRP and its supporters include  Licadho funded by USAID and the Cambodian Center for Independent Media (CCIM) funded by US National Endowment for Democracy-subsidiary the International Republican Institute, Open Society, the British and Australian embassies as well as Canada Fund.

Were Russia doing any of this in the United States, Washington's reaction would undoubtedly be swift and severe, and backed with full support from supposed "rights advocates" like Phil Robertson and Human Rights Watch. There would shuttered organisations, arrests, charges, trials and lengthy sentences handed out. Yet the United States openly subjects other nations to abuse it would not tolerate itself.

The US reaction to the trial for former RFA employees and its overall attempts to condemn and reverse Cambodia's widening crackdown on foreign interference in its own internal political affairs is an exercise in both hypocrisy and "might makes right." Unfortunately for Washington, the potency of that reaction is diminishing in direct proportion to its diminishing "might" across Asia-Pacific.

Washington's involvement in Cambodia in the first place is aimed not only at co-opting the Cambodian people, their territory and resources, but also at surrounding China with either US client states or failed states unable to aid Beijing in its continued and steady rise upon the global stage.

Washington's recent setbacks are demonstrative of how this policy of encirclement and containment is failing. While compromised "rights advocates" like Robertson attempt to portray Cambodia's recent trial as a miscarriage of justice, it in truth is indicative of a wider trend reversing injustice imposed upon nation's and their sovereignty by Washington and its proxies who have, until recently, operated largely with impunity.