US Walks Away From Southeast Asia Summit Empty-Handed

A recent meeting of the 10 member Association of Southeast Asian Nations (ASEAN) convened in Bangkok, Thailand and attended by representatives from China, Russia and even the United States, provides us with a clear indicator of how power and influence are being shaped across wider Asia and even globally. 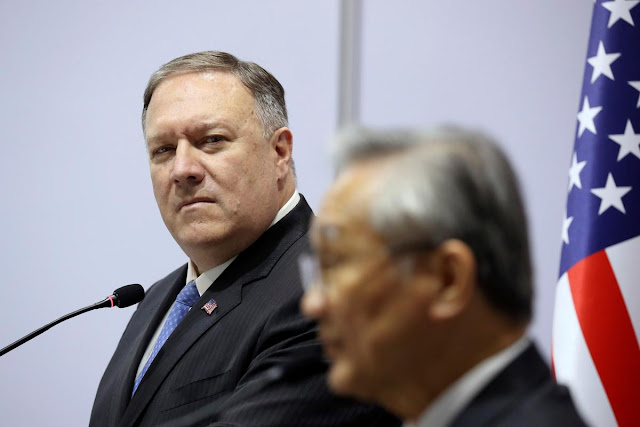 Headlines like the Associated Press', "Pompeo ends frustrating Bangkok visit," gives a good feel for how, at least for Washington, the meeting went and how the region responded to Washington's "plans" for it.

The article would note:

US Secretary of State Mike Pompeo left Thailand on Saturday with his hopes for resuming nuclear talks with North Korea dashed, while facing an escalating trade war with China and a potentially devastating breakdown in relations between key American allies Japan and South Korea.

Another article published just ahead of the meetings would better frame US Secretary of State Mike Pompeo's (and Washington's) agenda. The LA Times', "Pompeo seeks to restore U.S. influence in Southeast Asia amid China’s rise," would report:


Against a backdrop of China’s rising economic and military power, Secretary of State Michael R. Pompeo arrived in the Thai capital of Bangkok this week with a difficult mission: Try to win back lost ground in Southeast Asia, a region once dominated by the U.S.

The article would continue:


Pompeo is also attempting to solidify another initiative of his tenure: creation of the so-called Indo-Pacific region, which portends to redraw boundaries to stretch from the U.S. West Coast to Japan, down through Southeast Asia to Australia and west across another ocean to India. It is replacing the familiar Asia-Pacific region and incorporates India (while sidelining Pakistan) to expand U.S. heft against China.

China has not been shy about pouring tens of billions of dollars into infrastructure projects as part of its mammoth Belt and Road initiative, promising to boost transport systems and connectivity to help drive a sustained period of growth and stepping in where the U.S. often isn’t.

Thanks in part to China’s investment, the Assn. of Southeast Asian Nations, or ASEAN, has posted a combined economic-output growth of 50% in the last decade.

The LA Times would then attempt to cite "backlash" across the region, but upon closer examination, things like Malaysia "cancelling" One Belt, One Road (OBOR) projects with China were more about negotiating better agreements rather than cancelling them.

The Diplomat in an article from April this year titled, "Malaysia: Revised China Deal Shows Costs Were Inflated," helps explain how the Chinese-Malaysian "row" was blown out of proportion by many in the Western media and how the project is once again moving forward.

Despite this renegotiating having long-since taken place, the LA Times and other media outlets are still trying to portray various countries in Southeast Asia as "opposed" to China or having cancelled deals that are still very much moving forward.

The LA Times also tries to cite disputes in the South China Sea, another area of conflict cultivated by Washington with even the nations it is supposedly "defending" dragging their feet on initiatives Washington had hoped would divide the region and isolate Beijing.


The LA Times does finally admit:


Many Southeast Asian governments have also recoiled at what they see as U.S. efforts to force them to take sides in the trade dispute with China.

Apart from Vietnam, no country in the region has agreed to join the U.S. boycott of Huawei, despite the Trump administration’s warnings that the U.S. could cease sharing sensitive information with countries that use the company’s technology.

Not only has ASEAN rejected US demands regarding Huawei and other coercive polices designed to divide the region and set back joint development, the LA Times quotes Western policymakers who have no choice but to admit the US has no alternatives to offer the region.

Thailand in particular has suffered years of coercion from Washington in a bid to roll back Thai-Chinese relations.

Thailand is currently in the process of replacing the vast majority of its aging US military hardware with new Chinese systems including main battle tanks, armoured personnel carriers, infantry fighting vehicles and even the nation's first modern submarine. 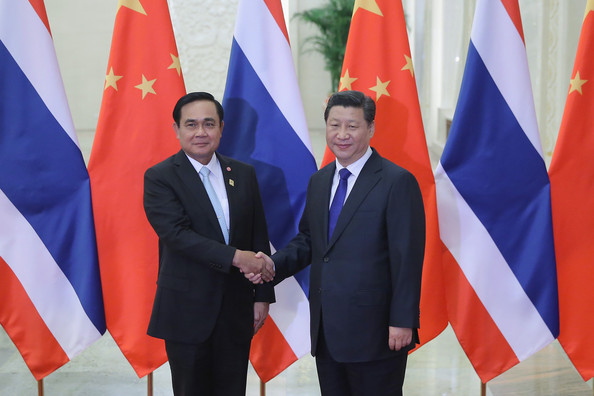 Thailand is also currently in the process of building a joint Thai-Chinese high-speed rail network connecting Thai cities and also connecting Thailand to its neighbours.

Despite US coercion and multiple attempts to politically subvert Thailand's current political order, Thailand continues moving forward undaunted. Not only did it ignore US demands to boycott Huawei, the Chinese tech-giant has been contracted to build the nation's 5G telecommunications network.

In light of this reality, the US has been forced to back off (at least publicly) from its various threats and preconditions.

The South China Morning Post in an article titled, "Mike Pompeo set for first visit to Thailand as US looks to renew ties despite junta leader Prayuth Chan-ocha retaining grip on power," would claim:


US Secretary of State Mike Pompeo will begin his first visit to Thailand on Thursday as part of a week-long tour of the Indo-Pacific that will include stops in Australia and Micronesia.

His visit comes as the country emerges from five years of military rule, with coup leader Prayuth Chan-ocha retaining power after being voted prime minister by his ruling coalition following March’s disputed election. His new cabinet was confirmed after being approved by Thailand’s king earlier this month.

The article would continue by claiming:


The United States condemned Prayuth’s 2014 coup and subsequently downgraded defence ties, raising questions over whether Washington will be satisfied by Thailand’s return to democracy – especially amid allegations of electoral fraud and a vote that was widely considered to be rigged in the junta’s favour.

But as Bangkok has leaned ever closer to China in the years since the army seized power – with increased arms deals, investments and economic cooperation – the US has expressed readiness to work with Thailand again, and support the country as it assumes the role of chair of the Association of Southeast Asian Nations (Asean) this year.

The SCMP never mentions that the regime the Thai military ousted from power in 2014 was the recipient of extensive US and European support. It was also headed by a fugitive, Thaksin Shinawatra, who did not even reside in the country at the time.

Instead, we see the Western media's familiar tactic of condemning any election that delivers results unfavourable to Washington's interests. We also see how the US has been left with no choice but to either make concessions and work with Thailand where it can, or be left behind indefinitely.

Considering the trail of broken treaties, political meddling and the destructive trade war the US has initiated against China at Asia's collective expense, it is difficult to see where Thailand or other ASEAN members can find common ground, mutual interests or any activity at all with the US that is mutually beneficial. Much of ASEAN's current ties with the US are designed merely to buy time and avoid more aggressive tactics by Washington until the window closes on US hegemony for good.

The real shame of it is that ASEAN could use a counterbalance to China's rise, ensuring Beijing is never even so much as tempted to simply trade places with the US as the next abusive regional hegemon. It is a counterbalance the US could serve as had it anything genuine to offer potential partners. Instead, ASEAN must look within itself and to other nations across Eurasia, including Russia.

It is ironically not China's rise that has prompted America's decline around the globe or in Asia-Pacific specifically, but rather its own unsustainable policies it seems incapable of reforming. Until Washington can approach the Southeast Asia as a region populated by sovereign nations to do business with, rather than a fiefdom to exploit, US representatives will continue to leave regional meetings empty-handed.