Nations running afoul of US and European hegemony often find themselves the target of concerted, long-term propaganda campaigns. Without creating a media front capable of confronting this propaganda, virtually nothing a targeted nation does can improve its image among the global public, because no matter what it does, it will be 'spun' by the US and European media to smear it. 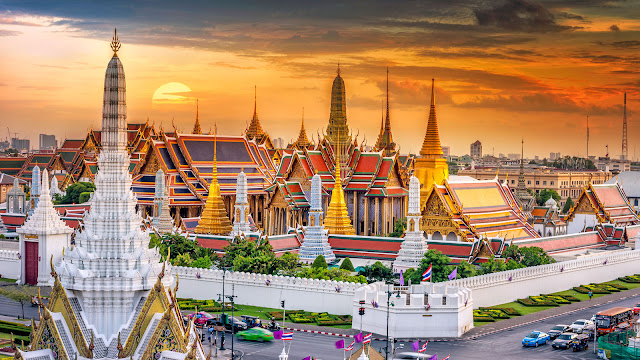 A pertinent example can be found in Southeast Asia's Kingdom of Thailand which possesses the second largest economy in ASEAN and has become one of Beijing's most important partners in the region. Because of this, it has become a target for US and European political subversion in the hopes of installing a government that can reverse this trend.

To that end, Thailand's institutions have come under attack, including its military and constitutional monarchy.

The current Thai dynasty has existed for nearly as long as the US has been a nation, and the institution itself has existed for over eight centuries. Its modern manifestation fosters national unity and is the caretaker of Thai tradition, culture and history. The constitutional monarchy also invests heavily in development projects across the country.

Thailand's monarchy is also an institution in constant change to keep up with the times. A recent revision to the monarchy's property holdings placed Thailand's King Maha Vajiralongkorn under the same property tax laws as the rest of the nation.

However, because Thai tax laws are poorly understood by foreigners, an opportunity to spin a reform into a smear presented itself and UK-based media organisation Reuters took full advantage of it.

In their article, "Thai king exempted from tax on some land properties," Reuters claimed:


Thailand’s King Maha Vajiralongkorn will be exempt from tax on some of his land property, according to a government announcement.

The Crown Property Bureau, which manages the multi-billion dollar holdings of the monarchy and controls huge swathes of land in Bangkok, was placed under the king’s direct control in 2017. Its previous tax exempt status was then removed.

But some of the king’s lands and establishments will now be exempt from tax, according to the new legislation published in the Royal Gazette on Friday.

Reuters then finally admits there is one "exception;" land not used for "non-profit" purposes, or in other words, land used for commercial purposes will be taxed.

Never mentioned throughout the entirety of Reuters' article is the fact that this is not a special exemption at all.

There is no property tax leveled against anyone using their property for private purposes. Property taxes are only collected in Thailand if property is used for commercial purposes.

A quick search online for "property taxes in Thailand" reveals numerous Thai-based law firms clearly explaining Thai property taxes, like this one from Thailand Law Online. It explains (my emphasis):


There are no general property taxes (capital tax on property imposed by the government) in Thailand, but real properties put to commercial use (residential houses not 'owner occupied' and commercial buildings) must under the Building and Land Tax Act pay a 'rental' tax at a rate of 12,5 % of the annual rental value or the annual assessed rental value, whichever is higher.

Thus, the new law places the King of Thailand under the same rules as all other Thais, and is if anything a forward-thinking reform.

Reuters capitalised on its readership's ignorance and trust, intentionally spinning the reform depicting it as an elitist "exemption" to smear Thailand and its institutions as part of a wider agenda to undermine and overthrow Thailand's current political order and replace it with one more pliable for US and European special interests.


Supposedly professional journalists who failed to conduct even the most basic research into Thailand's tax laws to discover these "exemptions" were nothing of the sort, leaves the critical thinker with little choice but to assume the Reuters article was an intentional smear. Anyone familiar with Reuters' methods in Thailand (or elsewhere) understands that this case of severe misrepresentation  fits an established pattern of deliberate misrepresentation and misinformation and was in no way just sloppy journalism.

It's clear that no matter what Thailand and its institutions do domestically or internationally, they are and will continue to be the target of the same sort of concerted propaganda campaign US and European interests aim at all nations impeding their interests around the globe.

Without Thailand's own international media platform, like China's CGTN or Russia's RT, or without significant ties to these larger alternative media networks directly or indirectly, such smears and disinformation campaigns will continue unchecked.

It is essential for Thailand and other nations facing similar misinformation campaigns, to consider the defence of their "information space" just as they defend their physical territory. Smaller nations like Thailand need not and probably should not confront the US and Europe with the same vigor as Chinese or Russian media, but at the moment, Thailand lacks any means at all to present its side of any given story.

The fact that Facebook and Twitter shut down New Eastern Outlook, one of the few platforms where stories defending Thailand against such attacks could be found on, means that the few voices confronting smears and spin from outlets like Reuters, are that much fewer.