Why Thailand is Buying Russian Helicopters

Beginning in 2011, the Kingdom of Thailand began replacing aging US helicopters not with newer US-built models, but with Russian and Italian systems instead. 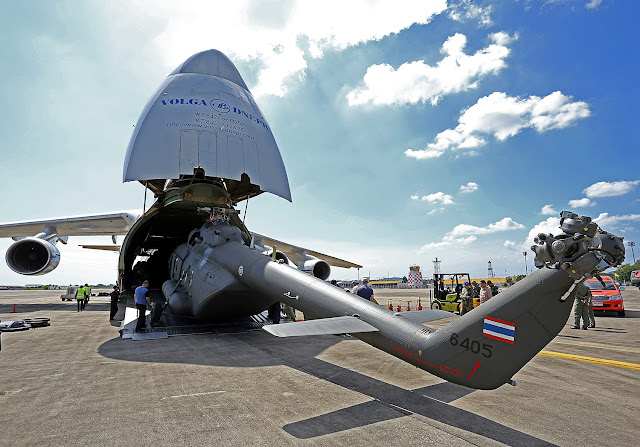 
The RTA [Royal Thai Army] already operates five Mi-17V-5 platforms. In March 2008 the service ordered the first three such rotorcraft from Russia, which were delivered in March 2011, followed by the remaining two in November 2015 under a contract signed in July 2014.

The article also noted that 2 more have recently arrived in Thailand, bringing the total number up to 7:

Russia's embassy in Bangkok would note during the delivery of several Mi-17's in 2015 that:


This model of the famous Russian MI-17 helicopter can be used not only for transportation purposes but also in combat circumstances as well as for civil needs, in particular for rescue operations and forest fire extinguishing.

Indeed, far from just new toys resulting from a military spending spree as US-backed opposition figures in Thailand claim, Russian-built Mi-17s have already been seen in action, most notably during the spectacular cave rescue incident last year where 12 children and their football coach made it out of flooded caves alive. 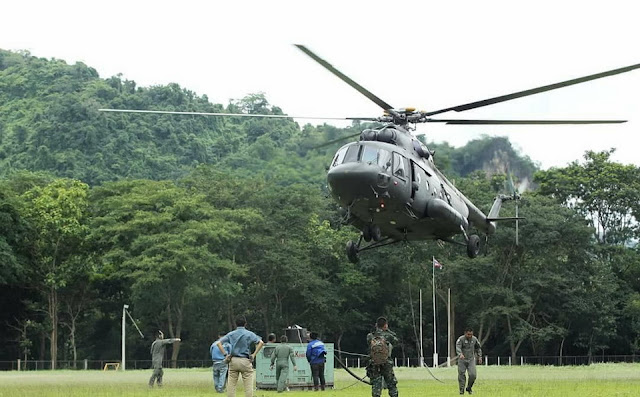 Mi-17's could be seen bringing in heavy equipment and other supplies to aid in search and rescue operations, just as Russian representatives had promised they could. The rescued children were also in fact flown to safety on Thailand's Mi-17's. 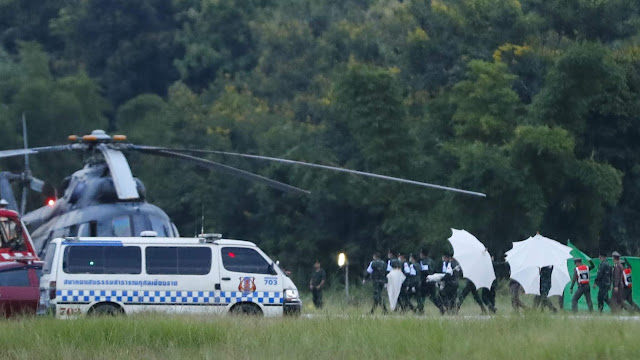 While these initial 7 Mi-17's sound insignificant, it should be noted that Thailand operates only 12 US-built UH-60 Blackhawk helicopters. While it has a much larger number of much older US-built UH-1 and UH-212 Huey helicopters (78 and 51 respectively) only 20 UH-1's are being modernised along with 48 UH-212's.

Interestingly enough, the resources needed to upgrade Thailand's aging US helicopter fleet was so extensive it prompted Thai policymakers to look into and eventually decide to begin transitioning over to Russia's Mi-17, using funds from the upgrade programme to do so.


Defense Industry Daily would report in its January 2019 article, "Thais Go Russian, Buy Mi-17 Helicopters – Now to Pay with Rubber," that (my emphasis):

The article would also quote Thai representatives regarding cost and performance considerations over buying more US helicopters versus new Russian alternatives:


“We are buying three Mi-17 helicopters for the price of one Black Hawk. The Mi-17 can also carry more than 30 troops, while the Black Hawk could carry only 13 soldiers. These were the key factors behind the decision.”

This should hardly come as a surprise and is about more than just shifting geopolitics.

Even the US Agrees: Russian Helicopters are Better

The US itself in the midst of its now 2 decade-long occupation of Afghanistan even at one point began buying Russian Mi-17's to equip the Afghan military to save money both in initial purchases and maintenance as well as in terms of training mechanics and pilots. 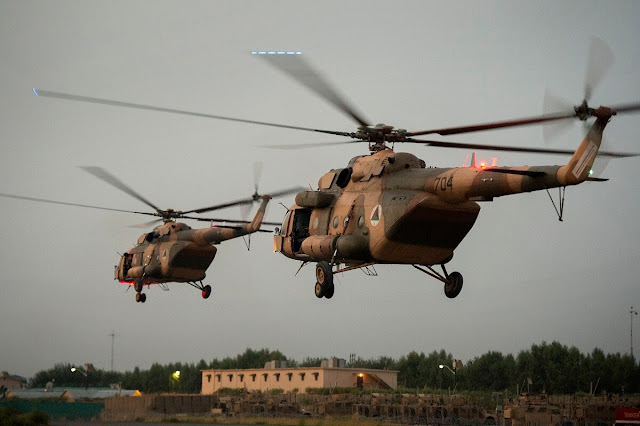 The Washington Post in a 2013 article titled, "Congress fuming over U.S. purchase of Russian helicopters for Afghanistan," would claim:

By the end of 2016, Afghanistan’s air force is due to have 86 Russian-made Mi-17 helicopters. Most of them will have been purchased by the United States from Rosoboronexport, the same state weapons exporter that continues to arm the Syrian government of Bashar al-Assad.


The Pentagon says that there is no better, cheaper helicopter than the Mi-17 to operate in Afghanistan’s desert expanses and high altitudes, and that it is the aircraft the Afghans know best.

Later, a purely politically-motivated transition toward US-built UH-60 Blackhawks precipitated predictable problems, as Defense News would report in its 2018 article, "Afghans are switching from Russian to US helicopters, but senators are concerned over the approach," noting:


As the Afghans transition from the Mi-17 to the UH-60, several operational challenges have cropped up regarding the Black Hawk’s capability related to the Mi-17.

The IG report said that the Black Hawk does not have the lift capacity comparable to Mi-17s and is unable to take on some of the larger cargo an Mi-17 carries, which requires two UH-60s to carry the load of one Mi-17.

Additionally, the Black Hawks can’t fly at the same high elevations as an Mi-17. As a result, the former cannot operate in remote areas of the country.

UH-60 Blackhawks cost 2-3 times as much as Mi-17's, with less lift and a much smaller passenger and cargo capacity while being unable to perform across the same extensive environments as Mi-17's.

For any policymaker, cost and performance considerations alone are enough to make a case for "going Russian."

While political considerations in Washington have directed policy toward wasting money on inferior technology, in capitals elsewhere around the globe chaffing under US interference in their internal affairs and the US' disruptive foreign policy in general, bolstering Russian industry (or China's for that matter) at Washington's expense can only help tip the balance of global power further in favour of a more equitable multipolar world.

Considering the success of Russia's Mi-17, with even Washington itself having at one point bought them in great quantities, it should be no surprise that nations particularly in Asia are receptive to greater collaboration with Russian helicopter manufacturers. 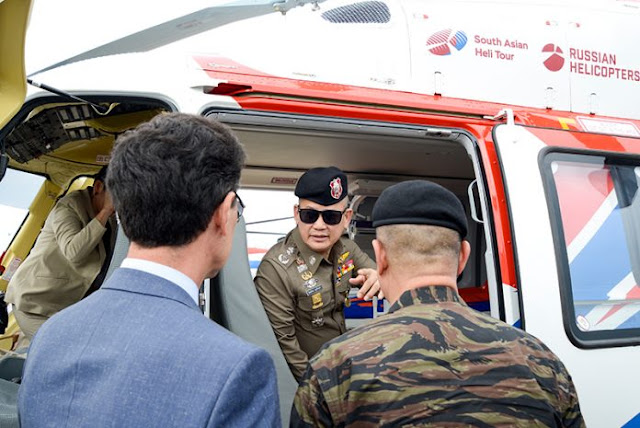 Early in 2019, Russian Helicopters carried out a demonstration in Thailand and other Southeast Asian states to showcase their rotary-wing aircraft for civilian uses. The Bangkok Post in its article, "Russian Helicopters begins Asian offensive," would note:


The demonstration is part of Russian Helicopter's business strategy to break into the civil aviation market in Southeast Asia and China. The company already has many military contracts in the region, but would like to expand into civilian uses like medical emergencies, policing and VIP transport.

The article also notes that the company is already in the process of delivering several Ka-32A11BC helicopters (used for search and rescue) to Thailand.


Russian Helicopters is seeking to form a joint venture with a Thai company to enter the country's flagship Eastern Economic Corridor (EEC), aiming to establish production of helicopter parts for aviation companies.

All of this is just one part of Russia's wider interest in investing in and partnering with Thailand and other nations in the region.

It should be noted that the purchase of complex systems like aircraft or naval vessels entails more than just the transfer of money and equipment.

It also requires closer ties between the two nations involved, with Russia now committed to training Thai pilots and mechanics in how to operate and maintain their growing collection of Russian aircraft. With such collaboration comes closer ties in general and helps further reduce Thailand's dependence on and vulnerability to US interests, influence and interference. It also aids in doing so, however incrementally, for the rest of Southeast Asia.

A similar process is taking place between Thailand and China where Thailand is replacing the vast majority of its aging US armoured vehicles with modern Chinese alternatives as well as the purchase of several significant naval vessels including the Kingdom's first modern submarine.

Because Russia and China create superior technology at a fraction of the cost of US alternatives, nations are faced with an easy, commonsense decision to make. While US pressure in the past was often able to coerce nations into making decisions contra to their best interests, this is no longer the case. Thus we are witnessing the tipping off of irreversible momentum against Washington's favour.

It is not as if American engineers are incapable of creating comparable technology at competitive costs, it is a concentrated collection of special interests who monopolise the required physical and political resource, preventing them from doing so, all in pursuit of unrealistic ambitions of global hegemony. The desire to rule over the world's nations rather than fairly do business among them appears to be costing America the ability to do either.

Until this part of the equation is solved in the United States, Russian helicopters and likely a wider range of technology and services across other industries, hold a bright future across Eurasia, including Southeast Asia and particularly in Thailand.