US attempts to destabilize Thailand aim to weaken Thai-Chinese relations at Beijing's expense. 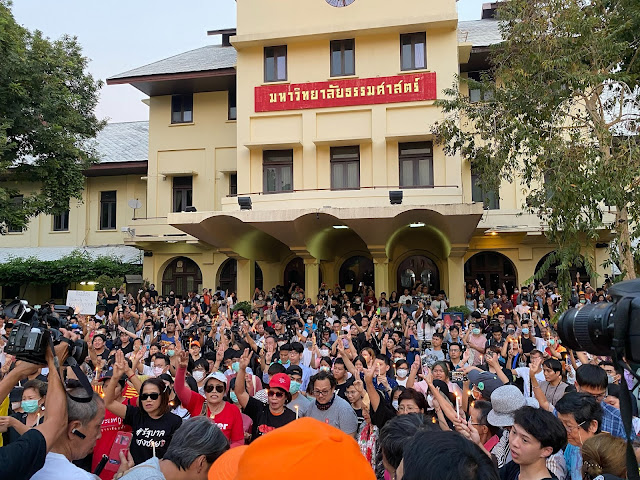 However, the Western media's eager support for the small mob complete with quotes of support from the US Embassy in Bangkok should be the first clue that it has little to do with actual democracy or Thailand's best interests and more to do with bolstering Western proxies in Thailand and boosting waning Western influence in Thailand, and across wider Asia vis-a-vis China.

The recent ruling by Thailand's Constitutional Court regarding Future Forward and its dissolution is indeed not an attack on "democracy" but rather the confronting of an overtly corrupt party led by an equally corrupt billionaire, Thanathorn Juangroongruangkit.

Thanathorn has in the past openly received the support of the US and other Western embassies amid his multiplying and increasingly overt legal transgressions. His Future Forward political party is comprised of members drawn from US and European-funded fronts posing as nongovernmental organizations (NGOs).

In his latest legal transgression - Thanathorn "loaned" his own party millions of dollars. Of course, Future Forward has no means or intention of ever paying back this "loan," meaning that it was instead in all actuality a donation - one made in direct and complete violation of Thai election laws.

The BBC would note in its article, "Future Forward: Thai pro-democracy party dissolved over loan," that:


The constitutional court ruled a loan of around $6m (£4.6m) to Future Forward from Thanathorn Juangroongruangkit was a donation, and therefore illegal.

The BBC would - however - attempt to present the party's dissolution as a setback for "democracy," claiming that the party had garnered "more than six million votes." Of course the BBC conveniently omits that it came in distant third, with its political allies from Thailand's Pheu Thai Party (PTP) led by exiled and likewise corrupt billionaire Thaksin Shinawatra coming in second and Thailand's Palang Pracharat Party coming in first regarding popular vote.

Thus Future Forward not only represents a minority (16%) of Thai voters - it represents the interests of a corrupt billionaire who openly violated Thai laws in his bid to seize political power. If this is the case, what are these "student" protesters at Thammasat University actually fighting for?

The protests of course have nothing to do with "students" and are instead led by openly foreign-funded fronts merely posing as "students" and "pro-democracy activists." Many of them are directly tied to Thanathorn's corrupt and now disbanded Future Forward political party - while others literally donned the red shirts of Pheu Thai's violent street mobs, the United Front for Democracy Against Dictatorship (UDD) - notorious for widespread arson and armed terrorism which paralyzed Bangkok in 2009 and 2010.

The Western media and local media funded-by and eagerly reflecting foreign interests attempted to portray Future Forward's dissolution as a clear bid by the ruling government to eliminate the "pro-democracy" opposition.


Articles like the Bangkok Post's "Hundreds rally for justice at Thammasat," would quote protesters from the minuscule mob, claiming:


“It doesn’t matter who the people elect — Thai Rak Thai, People Power Party or Future Forward — they all ended up being disbanded. Maybe we should try electing Palang Pracharath so it too is dissolved,” a speaker said, referring to the main party in the governing coalition.

Again - omitted is the fact that Palang Pracharath not only won the popular vote - far outperforming Future Forward at the polls by several million votes - it also formed the largest functional political coalition with smaller parties than Future Forward and its Pheu Thai allies did.

Thus "students" at Thammasat are not rallying for "democracy" or "justice," they are rallying against justice served to an overtly corrupt and unpopular political party in an attempt to undermine the ruling government voted into power by the majority of Thai voters.

In other words - Western and pro-Western local media articles spun an anti-democratic mob organized by a corrupt billionaire and his foreign sponsors as a "pro-democracy" rally.

No Future for Future Forward's Mobs

Despite the optimistic delusions of protesters who believe the Thammasat mob is the beginning of a larger scale anti-government movement in Thailand - it should be remembered that Future Forward is less popular than its Pheu Thai allies were at the height of their political power in 2009-2010 where even massive and extremely violent mobs were unable to reverse their declining political fortunes, leading to their eventual dislodging from power and even the flight of senior leaders overseas where they remain in exile.

Pheu Thai had in the past easily manipulated the Thai electoral system and delivered victory at the polls. In 2019 it failed to do so and Future Forward performed even worse. Their combined political power after the 2019 Thai general election was still unable to match that won at the polls by the military-linked Palang Pracharath Party and its political allies.

A political movement led by corrupt, exposed, and unpopular billionaires with waning power and influence does not a revolution make.

There is no doubt that Future Forward and the mobs it has funded and organized with the help of foreign interlopers will nonetheless attempt to portray street chaos as a popular uprising despite having openly failed at the polls in 2019 and having nothing even close to resembling popular public backing.

As these so-called "pro-democracy" forces fade further from power and popularity inside Thailand - the wider influence of the West whom sponsors them wanes across wider Asia. It overall reflects the decline of the West's so-called "soft power" - a geopolitical tool blunted by a lack of alternatives to those used by the West's competitors - namely Beijing - who offer political, economic, and military ties whose tangible benefits far exceed those - if any - offered by Washington, London, or Brussels.

As the US continues to focus on building dishonest and disruptive political movements led by corrupt billionaires, China is laying down physical infrastructure and contributing to regional trade producing mutually beneficial economic progress for the region.

Future Forward will no doubt manage to move bodies into the streets - just as its Pheu Thai allies did in 2009-2010. With many of the so-called "students" literally wearing Pheu Thai's UDD "red" shirts - it is clear that recent rallies are little more than a repeat of the 2009-2010 protests - led by the same circles of political agitators as in 2009-2010 - minus the somewhat wider support Pheu Thai once had at the time.

They do so at the risk of upsetting not only political and economic stability in Thailand, but all the benefits derived from both - including monetary incentives by various shareholders foreign and domestic who will undoubtedly counter-rally any gains made by Thanathorn and his Future Forward political party in the streets.

The capacity for Future Forward to disrupt political and economic stability in Thailand exists - but to a lesser extent than past foreign-backed chaos. The hopelessness of Future Forward's self-made political crisis and its insistence on still hiding behind "democracy" and "human rights" nonetheless will only help further expose both as the facades they truly are within the construct of Western-backed political meddling both within Thailand and across the wider Asian region.

Thanathorn and others like him in Thailand and across Asia will have one less rock to hide under as the sun of multipolarism and national sovereignty chases away the remaining shadows of Western colonialism cast across Asia.

The so-called opposition in Thailand represents the West's bid to counter growing Thai-Chinese relations that are further eroding Western primacy across Asia and the globe.

The BBC, other Western media organizations, and local media fronts mindlessly echoing their sentiments will continue to howl about "injustice" against billionaire Thanathorn Juangroongruangkit and his Future Forward political party in a bid to bolster the opposition - but fewer and fewer are listening with fewer still, believing.

Continuous lies buttressed by increasingly feeble "pro-democracy" narratives are unsustainable in and of themselves - but when compared to efforts by China and others to actually drive local, regional, and global development through tangible means - the West's "pro-democracy" game appears to have fully run its course.

For Thailand and the Thai people - it can only be hoped that these "flash mobs" fail to gain traction and those paying into Thanathorn, Future Forward, and the wider "pro-democracy" movement the West has created as a vector to project power and influence across Thailand see it as the poor investment it truly is.

The continued carrot and stick method used by the ruling government luring local and foreign shareholders seeking to stir up street chaos away their machinations and toward a more constructive role regarding national and regional development must continue while security forces and government media remain vigilant and prepared for the sort of disinformation, provocations, and violence that almost always accompany the sort of Western-sponsored political unrest this recent mob in Thailand represents.