Philippines: Crawling Out From Under America's Shadow?

President of the Philippines, Rodrigo Duterte, has announced his intentions to end the nation's security agreement with the United States, specifically its Visiting Forces Agreement. 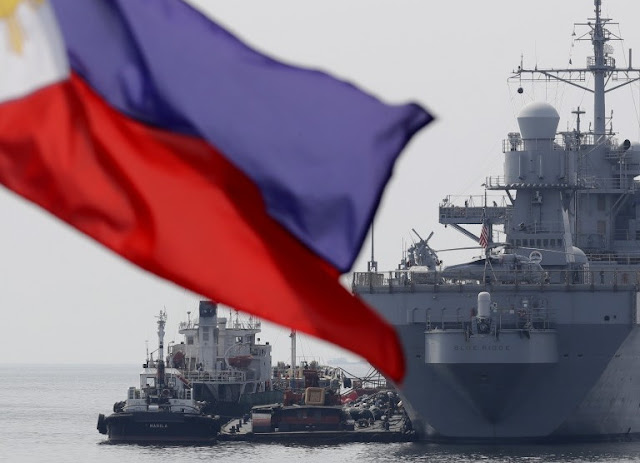 The move puts into question America's military presence in the Philippines and the influence it projects across Asia with it. In particular, it further complicates US attempts to encircle and contain the rise of China both in the region and upon the global stage.

NPR in its article, "Philippines Says It Will End U.S. Security Agreement," would report that:

At the direction of President Rodrigo Duterte, a fierce critic of the United States, the Philippines announced Tuesday that it would scrap a security pact that allows American forces to train there.


"It's about time we rely on ourselves. We will strengthen our own defenses and not rely on any other country," Philippine presidential spokesman Salvador Panelo said at a regular press briefing, quoting Duterte.

He said Manila would be open to similar agreements with other countries. "As long as it is favorable to us and there is a mutual benefit to both countries, we are open," he said.

NPR would cite US pressure placed on the Philippines regarding its "war on drugs" and the alleged human rights abuses stemming from it as the motivation for this recent decision.

Of course, the US itself is one of the leading nations in terms of human rights abuses meaning that any pressure placed on the Philippines for allegedly violating human rights was done solely for political reasons.

In the Philippines' case, its attempts to improve ties with Beijing and distance itself from commitments to its former colonial masters in Washington drive most of Washington's "humanitarian concerns" regarding Manila and its domestic policies.

NPR would describe the Philippines as having been "a former U.S. territory that gained independence in 1946" and that it "has long viewed Washington as its strongest ally."

In reality, the US seized the Philippines at the end of the Spanish-American War, then brutally extinguished attempts by the island nation to grain independence from Washington resulting in tens of thousands of deaths. The Philippines have since been the subject of US political machinations, meddling, interference and coercion since achieving its mostly symbolic independence in 1946.

Through a mixture of political interference, subversion and even terrorism, the US has attempted to extend its hold over the island nation. In recent years as US influence in Asia wanes and as China's grows, Manila has attempted to break this hold, if not entirely, incrementally through exerting pressure on Washington with threats precisely like the termination of the Visiting Forces Agreement.

The Real Reason Behind the US Military's Presence in the Philippines

NPR claims that the termination of the Philippines' cooperation with the US military could impact the nation's current struggle against extremists in its southern regions. The article mentions the 2017 battle against terrorists linked to the so-called Islamic State (IS) in the city of Marawi and US aid to the Philippine government rendered to win it.


What NPR fails to tell readers is that IS was a deliberate creation of US foreign policy; first to wage proxy war against Syria, and since then used as a proxy elsewhere, or in the Philippines' case, used as an excuse for a perpetual US military presence within Philippine territory.

Of course, the US military is not in the Philippines to help defend the nation against terrorists nor against outside enemies like "China" as Manila has good ties with Beijing, ties that grow stronger each year.

NPR even admits the US maintains a naval presence in the Philippines specifically to serve its ongoing provocations vis-a-vis China, claiming:


The U.S. Navy is also seen as a bulwark against China's territorial ambitions in the South China Sea. About a third of global shipping passes through its sea lanes, and the U.S. conducts Freedom of Navigation Operations in those waters in a bid to keep them open, to China's displeasure.

The Philippines of course has little to gain from hosting a belligerent nation using its territory as a springboard to provoke one of the Philippines' biggest trade partners and a nation Manila is building other important ties with including military ones, and ties on much more agreeable terms for Manila than those it has with Washington.

The Philippines' agreement with the US is an impediment to the nation's future, not an assurance for it.

But Not as Drastic as it Appears

Manila's termination of its military agreement with the US may appear drastic. However, it may not even be permanent and will likely be followed by negotiations between Washington and Manila to make existing ties between both nations more agreeable for Manila.

Even if the move is permanent, it will not automatically mean the withdrawal of all US military assets from the Philippines nor will it mean the absolute termination of all military cooperation between the Philippines and the US.

But it does represent the incremental erosion of US influence not only in the Philippines but across the rest of Asia. US hegemony in the region wasn't established overnight, and thus will not be dismantled overnight.

The Philippines is a nation that finds itself in orbit around the US, the product of over a century of US imperialism in the Pacific, but also a nation whose orbit grows in distance each year from Washington. At the same time, nearby China has grown in economic and political size, pulling in nations like the Philippines, not with imperialism but with economic incentives and the promise of doing business without the political prying practiced by Washington.

Since the US lacks any genuine incentive for the Philippines to reverse its growing distance from Washington, it will likely resort to additional provocations that will only push Manila further away and provide additional opportunities for Beijing.

The possible end of the US-Philippines Visiting Forces Agreement doesn't spell the end of US hegemony in Asia or even over the Philippines. It does however mark another incremental step towards both.