US Complains as Cambodia Pivots Toward China 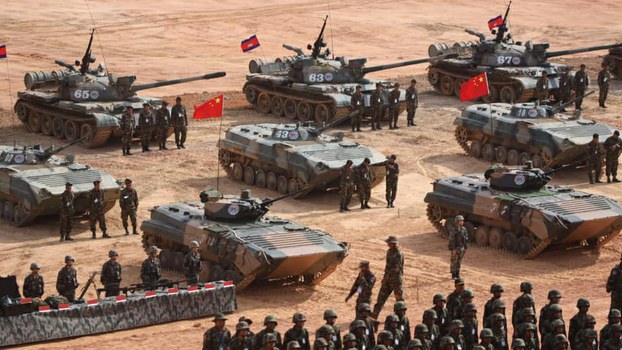 Cambodia has dismissed concerns over holding the exercises amid the outbreak noting the relatively small impact the virus' spread has had on the nation. Additionally, it is unlikely China will not exercise extreme caution when selecting and screening military personnel sent to participate in the exercises later this year.

The citing of the virus is merely the US taking a political shot at both China and Cambodia and by doing so reminding both nations of the importance of establishing significant and enduring alternatives to the current but waning US-led "international order."

US Complains About Growing Chinese-Cambodian Ties

In an RFA article titled, "Joint Cambodia-China ‘Golden Dragon’ Military Drills to Proceed, Despite Threat of Coronavirus," the US front complained:


Cambodia and China have no plans to cancel their fourth annual joint “Golden Dragon” military exercise later this month, despite the threat of the novel coronavirus (COVID-19), Cambodia’s Minister of Defense Tea Banh said Monday.

The article also openly complained about declining Western-Cambodian ties and how they reflected China's growing influence in the region. RFA would claim:


This year’s exercises mark an expansion over those in 2019, when 250 Chinese and 2,500 Cambodian military personnel took part in drills over 15 days at the Chum Kiri Military Shooting Range Training Field in Chum Kiri district.

They were the third and largest joint Cambodia-China military drills to be held on Cambodian soil since Cambodia’s Defense Ministry abruptly suspended annual “Angkor Sentinel” joint exercises with the U.S. military and abandoned counter-terrorism training exercises with the Australian military in 2017.

Joint exercises with Western nations were never reestablished after 2017, a sign of Washington's terminal decline in the region.

Washington's More of the Same Didn't and Won't Work

Rather than addressing Cambodia's concerns over overreaching Western influence, meddling and subversion within Cambodia's internal political affairs, the West (and the US in particular) has instead doubled down on meddling.


This too was mentioned in the RFA article, which claimed:


Meanwhile, Western influence in Cambodia is on the decline amid criticism of Hun Sen and the CPP over restrictions on democracy in the lead up to and aftermath of the ballot.

The U.S. has since announced visa bans on individuals seen as limiting democracy in the country, as part of a series of measures aimed at pressuring Cambodia to reverse course, and the European Union in mid-February announced plans to suspend tariff-free access to its market under the “Everything But Arms” (EBA) scheme for around one-fifth of Cambodia’s exports, citing rollbacks on human rights.

In reality, there has been no "rollback on human rights" in Cambodia, but merely a crackdown on openly Western-backed and funded sedition in the form of political opposition parties, many of which are literally run out of Washington D.C. and led by political figures hiding abroad from criminal charges and jail sentences.

It is a pattern repeated all across Southeast Asia and beyond, where the US and its European partners use a combination of economic and political coercion to manipulate and control developing nations, but a pattern that has worn thin among the nations targeted.

Targeted nations have increasingly taken advantage of emerging multipolarism and the ability to build alternative ties with nations like China and Russia who not only provide an alternative to Western ties and access to markets, but are increasingly providing better opportunities than the West can, even under the most ideal conditions.

While the West's brand of meddling will continue to have an impact on Cambodia, Cambodia and other nations in the region are increasingly establishing permanent alternatives in a process that will ultimately and likewise permanently render Western tactics impotent and the shareholders wielding them increasingly isolated.

Growing political, economic and military ties between China and Cambodia are permanently replacing US primacy over the region. Unless the US finds a more constructive and honest way of engaging with the region, this process will continue, and amid this process, contributing to a much wider, global decline of US power and influence.