Despite the unprecedented damage global panic over coronavirus disease 2019 (Covid-19) has caused to nations around the world, so-called "pro-democracy" protesters have vowed to immediately resume street mobs as soon as emergency measures are lifted in Thailand. 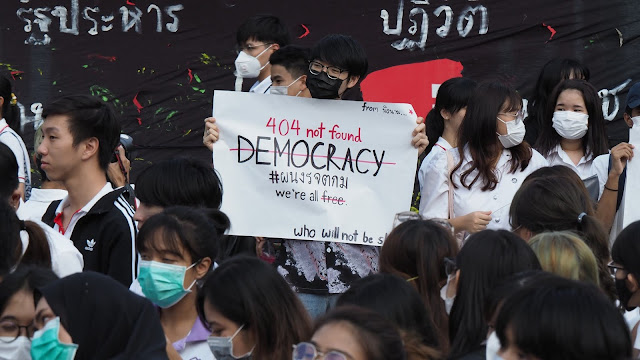 The move will almost certainly contribute to socioeconomic instability and only compound the plight faced by average Thais whom these "student protesters" claim they represent.

The protesters, while claiming to fight for "democracy," are actually supporters of corrupt nepotist billionaire Thanathorn Juangroongruangkit, his now disbanded  "Future Forward Party," and his sponsors including fugitive billionaire Thaksin Shinawatra, his "Pheu Thai Party" (PTP) and a host of foreign interests including the US and British governments.

US and British support for these protesters and the political parties they back stems from their collective opposition to the current Thai government's growing ties with nations like China and Russia who have helped to all but displace Western primacy over Asia Pacific.

The Nation in their article, "Students expected to continue democracy fight once virus situation abates," claimed:


Students are expected to resume intense political activities after the Covid-19 situation normalises and the government eases its lockdown restrictions next month.

Before the spread of Covid-19, students in universities across the country and some high schools in Bangkok had organised flash mobs in February and March to express their demand for democracy, rewriting the Constitution and ending the current military-backed coalition government.

Noteworthy is the students' supposed demand for "democracy."

The current government is in fact a result of democratic elections carried out in 2019, the ruling party Palang Pracharath having gained several million more votes that Thanathorn's "Future Forward Party" and building a coalition government larger than that proposed by Pheu Thai of which Future Forward is merely a subsidiary.

Ironically, those currently undermining democracy now are the student protesters themselves and their sponsors, who collectively refuse to respect the results of the 2019 general elections, seeking to create social instability in a bid to coerce the majority into making concessions to them they failed to earn at the ballot box.

At a time when others are working to help the nation recover from the global Covid-19 panic, including helping medical workers, innovating, organizing charity for those in need, and those working to put the nation back on its feet economically, these "student protesters" seem only able to offer the promise of more disruptions and the predictable socioeconomic damage they will cause, in pursuit of a transparently self-serving bid for political power.

The same article in the Nation would also point out the to current activities pursued by these "student protesters" which included sitting at home at their computers creating Twitter hashtags complaining about the government's performance during the Covid-19 outbreak.

The protesters, sponsored by foreign governments and in particularly the US and UK, and their plans to leverage the socioeconomic damage caused by Covid-19 to catch the government off balance at the end of emergency measures, may point to a much larger global strategy pursued by Washington and London to likewise target off-balanced governments around the world.

As nations around the globe face the health and economic threats Covid-19 poses, they should also be fully aware of and prepared for the geopolitical threat those seeking to take advantage of Covid-19 fallout to target their recovery efforts as US and British-backed protesters in Thailand appear poised to do.

For Thais themselves, they are once again reminded as to why they voted for the current government in power in Thailand in the first place, and not for Future Forward and its dishonest army of supporters, an army of supporters who seems only capable of condemning others and complicating the nation's progress into the future rather than aiding it in any practical or pragmatic way.