The Kingdom of Thailand plays a central role in the Southeast Asian ASEAN economic bloc. It has a population of nearly 70 million, the second largest economy in the region and hosts a key leg of China's One Belt, One Road (OBOR) initiative including high speed rail that will connect China (via Laos) to Malaysia and beyond.

Thus, regional recovery in the wake of the Coronavirus Disease 2019 (COVID-19) depends on central nations like Thailand's quick and orderly recovery.

For Thailand, the impact of COVID-19 has been mostly socioeconomic. The disease itself had a minimum health impact with health services easily accommodating the approximately 3,000 cases with less than 60 resulting in deaths. The deaths themselves were linked to serious pre-existing chronic illnesses and advanced age.

Thai businesses big and small also depend heavily on Chinese manufacturing for both components and for retailing. The temporary closure of Chinese factories created the first of two major setbacks for Thai businesses hitting supply, while lockdowns and curfews hit demand. 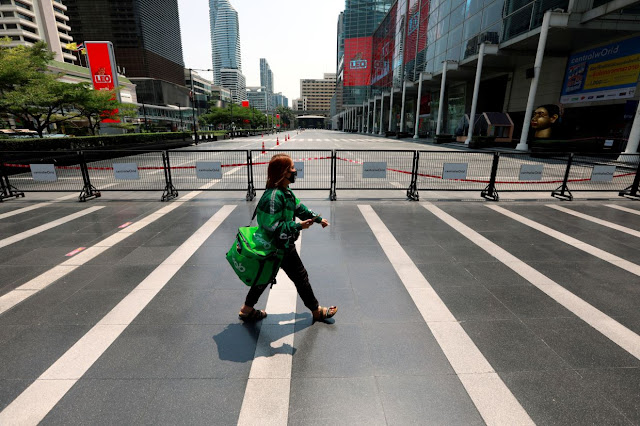 However, Thailand possesses a massive "informal economy" with myriad small independent businesses which have proven over the years to be exceptionally agile even in times of crisis. The use of modern telecommunication and IT technology (particularly online shopping and delivery apps) together with delivery services allowed to continue operating by the government during lockdown, many food, beverage and retail businesses continued operating, allowing many Thais to continue making a living despite restrictions.

The Thai government is investing heavily in breathing life back into the Thai economy, having already provided several programmes to aid those temporarily unemployed during the lockdown now being lifted incrementally across the country.

This includes a stimulus package aimed at helping businesses recover from the extended period of shuttered or partially shuttered business. State enterprises are also being restructured to prevent massive disruptions and losses in the event something like COVID-19 occurs again.

Because Thailand has strong economic fundamentals including a strong agricultural and manufacturing base as well as strong trade ties within both Southeast Asia and wider Asia including China who is itself on its way to recovery, Thailand will likely succeed in restoring economic stability and the return to normality in short order.

Thailand is also looking into ways of heading off similar disruptions in the future by looking for ways to bolster domestic economic activity in the event that foreign trade and tourism is ever cut off again.


While the majority of Thailand is eager to get back to business there is a small but loud minority eager to seize upon the crisis to compound Thailand's situation. This includes the US-backed political opposition led by the now defunct "Future Forward Party" (FFP) disbanded for blatant election law violations.

Despite being cast out of politics, FFP's leader, nepotist billionaire Thanathorn Juangroongruangkit continues to fund and organise disruptive street activities mirroring efforts in nearby Hong Kong to complicate and corrode stability in China. He does so with extensive support from the US and European media as well as US-European funded fronts posing as nongovernmental organisations.

"Student" protesters have vowed to resume street protests despite the party they support having already run in and lost elections in 2019, with FFP coming in distant 3rd with some 2 million fewer votes than the currently ruling Palang Pracharath Party.

But just as is done elsewhere by the US, struggling opposition groups with minimal prospects of ever coming to power on their own are searched out and built up either to seize power and serve as a client regime or to create enough instability to exact concessions from a nation's ruling government.

In Thailand's case the US seeks to place a divide between it and China, complicating China's OBOR ambitions and removing from China's foreign trade ties a large and constructive economic partner. Thailand's recent military acquisitions have also been largely from China which has been followed by growing Thai-Chinese military cooperation, replacing Thai-US cooperation that had been cultivated by Washington since the Vietnam War.

For all of these reasons and more, the US and the opposition it funds and backs in Thailand are bent on complicating Thailand's return to normal in the wake of COVID-19 to in turn complicate China's recovery and in a much longer-term effort, complicate China's rise as a global power.

While Thailand and other nations around the globe work both on their own and in cooperation with each other to return stability and prosperity to their respective societies, the United States and its partners are determined to draw out the damage as long as possible and in the hopes of leveraging it to their advantage.

This more than anything else helps reveal what is behind supposed "pro-democracy" protests who seem to have endless resources and time even as the rest of society struggles to return to work and make a living.