US Loses Myanmar to China

For the Southeast Asian state of Myanmar, the decision to expand ties with China despite Western pressure was a no-brainer. Significant economic ties have been expanded and the prospect for several large-scale infrastructure projects have been firmed up. 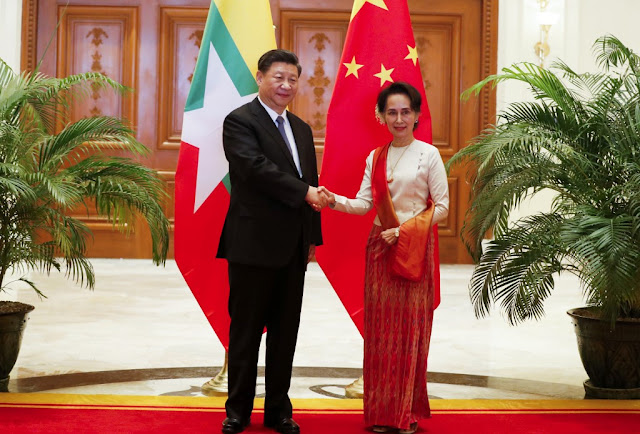 Chinese President Xi Jinping's recent visit to Myanmar could be considered a victory lap of sorts; the cementing of long-standing and ever-expanding ties between Myanmar and China and the final displacement of significant US and British influence in the former British colony.

An op-ed on China's CGTN website titled, "Xi's New Year visit to Myanmar: A milestone in bilateral relations," would help frame the significance of President Xi's visit while comparing and contrasting Myanmar's ties with China and the US.

The op-ed would note that President Xi's trip to Myanmar was his first major trip abroad made during 2020. It is also the first major visit by a Chinese leader to Myanmar in nearly 20 years.

To understand the significance of this it is important to understand that Suu Kyi and her rise to power was primarily driven by support from Washington.

She and her political party along with a large army of US government-funded fronts posing as nongovernmental organisations (NGOs) and US-funded media networks were selected and groomed for decades by Washington to seize power and serve as a vector for US special interests both in Myanmar itself and as a point of leverage versus Beijing.

However, despite America's expertise in political meddling, what it lacks is, as the op-ed calls it, any concrete economic pillars; something China does have on offer.

No matter how much covert or overt financial and political support any client regime in Myanmar may receive from Washington it does not address the genuine need for real development within Myanmar itself. Without such development and the financial and economic incentives it brings with it, enemies and allies of the client regime alike will turn towards those who can offer such incentives.

The CGTN op-ed noted the focus of President Xi's visit which centred around major political issues plaguing Myanmar including the ongoing Rohingya crisis and border conflicts with neighbouring Bangladesh resulting from the crisis.

The focus was not on feigned concerns for human rights however, but rather on establishing stability since Myanmar and Bangladesh are both partners with Beijing and its Belt and Road Initiative (BRI).

The visit also focused on pushing forward stalled infrastructure projects that have been held up by US-funded fronts hiding behind human rights and environmental concerns.

The op-ed would conclude by noting:


China is reaching out to Myanmar proactively at the start of 2020. Hopefully, Myanmar will return the favor by cooperating more closely with China and pushing forward financially bankable and locally empowering BRI projects in Myanmar more resolutely.

Only time will tell whether or not Myanmar will follow through and reciprocate to Beijing's overtures, but owing to the lack of alternatives offered by Washington, a US client regime or not, Myanmar's government seems to have a very simple choice to make.

US Denial and Revisionism Ensures Continued US Decline in Asia

A Western-centric rebuttal over the impact of President Xi's visit to Myanmar was offered up by The Diplomat in its article, "Has the US Lost Myanmar to China? Xi’s visit bolstered China-Myanmar ties, but the West can still compete."

The Diplomat's piece claims (my emphasis):


Chinese leader Xi Jinping just wrapped up a two-day visit to Myanmar from January 17-18, the first trip by a Chinese head of state since Jiang Zemin traveled to Burma in 2001. Xi’s visit notably occurred in the 70th anniversary year of China-Myanmar diplomatic relations and further cemented bilateral relations, which have been in general extremely positive since the West turned away from the embattled country in light of the Rohingya migrant crisis that erupted in 2017.

The Diplomat here ignores an important reality. The Rohingya crisis was precipitated deliberately by the US and its British partners. It was meant to destabilise the very region China was building logistical hubs for the BRI.

The crisis was also meant to serve as leverage against the US client regime, ensuring it remained in line with Washington's interests or suffered at the hands of the West's massive industrial-scale human rights complex; a network of fronts used to manipulate, coerce and defame targeted nations and governments under the pretext of defending human rights.

The US didn't turn away from Myanmar because of the Rohingya crisis. It attempted to leverage it after deliberately engineering it, and upon failing to materialise any tangible gains, saw its influence in Myanmar fade.

The Diplomat article also blames Myanmar's "mixed political system" claiming that pressure has been put on an otherwise promising democratic government to pivot toward Beijing at Washington's expense. In reality, the pivot is jointly beneficial both to Washington's enemies in Myanmar and its allies.

The Diplomat fully acknowledges the importance of Myanmar to China's regional and global rise, stating:


Myanmar is of special significance to Beijing’s geostrategic plans. The country provides China with access to the Indian Ocean and offers a vital hub for containing its rival rising power India, with whom it has clashed on their shared border. The Indian Ocean provides major shipping lanes for China’s imports of crude oil from the Middle East. Overland routes now in use (oil and gas pipelines in Kyaukphyu began pumping oil in 2017 and gas in 2013) across Myanmar and all the way to Kunming in southern China’s Yunnan province allow Beijing to circumvent the South China Sea and strategically vulnerable Malacca Strait, which is susceptible to maritime frictions with other major powers including Japan and the United States.

If Myanmar's cooperation with China is this important to Beijing's regional and global plans, then it is easy to understand why ruining Myanmar's capacity to cooperate has taken priority amid Washington's policy toward Myanmar.

The article openly admits that Washington's means of regaining influence in Myanmar depends on "soft power" or what would be considered by anyone else as coercion, manipulation and political interference.

The article itself admits:


...the United States still has important policy tools and untapped reserves of soft power that it can utilize if wielded skillfully. As I’ve written before, American companies and investors still enjoy major reputational advantage over Chinese counterparts. Young Burmese people still flock to the American Center in Yangon, the cultural and educational hub sponsored by the U.S. Department of State next to the American Embassy. In fact, Washington opened a gleaming new American Center in 2018 at a busy intersection just down the street from Aung San Suu Kyi’s residence. There, Burmese can come to learn English, use computers, and access the library to study democracy and tools of civic engagement.

What's absent from Washington's "solution" is any tangible economic or financial incentive for the population of Myanmar to get behind US interests. America's inability to offer genuine economic benefits to Myanmar or build essential infrastructure like the pipelines, highways, railways and ports China is currently working on across the country means that America's decline will only continue.

Doubling down on a losing strategy should be interpreted by Myanmar's elite as American capitulation and a detriment to Myanmar's future. The Diplomat concludes by more or less admitting that Washington will continue to focus on a divide and conquer strategy to disrupt stability in Myanmar in order to render concessions from Myanmar's government rather than simply and constructively outcompeting Chinese investments and infrastructure projects.

If anything, Washington's current strategy should serve as impetus for Myanmar and other nations along China's peripheries to fully uproot US "soft power" from within their territory and conditionally do business with US firms only if they are ready to really do business rather than substitute meddling and interference where genuine and mutually beneficial cooperation should be; a space China has consistently proven it can fill, and a space America has shown no interest in competing in.