New US Ambassador Seeks to Drag Thailand into US-China Conflict

The English-language Bangkok Post helped reveal Washington's growing obsession with Beijing and its attempts to drag Thailand into the middle of its conflict during an interview with the newly appointed US ambassador to Thailand, Michael DeSombre. 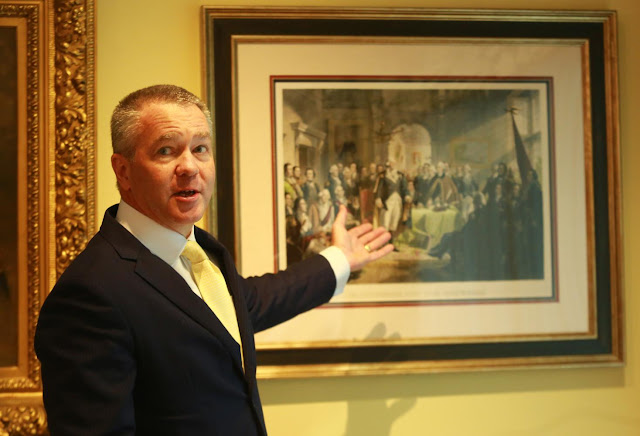 In an article titled, "US turns focus to South China Sea," the Bangkok Post claims:


Early this month, China held a five-day naval drill near the contested Paracel Islands. Then the US carried out military exercises in the waterway showing support for the free and open Indo-Pacific, as the South China Sea has been subject to overlapping claims by many countries, including China.

The article then claims:


In an interview with the Bangkok Post, US Ambassador Michael George DeSombre said the US had carried out its military engagement in support of freedom.

"That is what we have done in the Spanish-American War, World War I and World War II. That is the role we see our military provides in promoting freedom around the world and ensuring other countries have the ability to be sovereign, safe and secure, which is the foundation of our Indo-Pacific strategy," he said.

This fantastical claims made by the newly appointed US ambassador flew in the face of facts, both in historical and contemporary terms. The new ambassador also never convincingly explained what Washington's fixation over China had to do with Thailand or what Thailand would gain by supporting the US against Thailand's largest and most important economic partner.

While another Thailand-based English-language newspaper, The Nation, conducted a similar interview, it included a clear graph illustrating that China's foreign direct investment (FDI) in Thailand was over 13 times larger than the United States', perhaps letting economic realities speak where Nation reporters were too polite to point out the increasingly quixotic nature of US foreign policy.


The US Tramples National Sovereignty Worldwide, Not Defends it

In historical terms, it was at the end of the Spanish-American War mentioned by US Ambassador DeSombre in the Bangkok Post that the United States transformed the Philippines into a literal US colony. 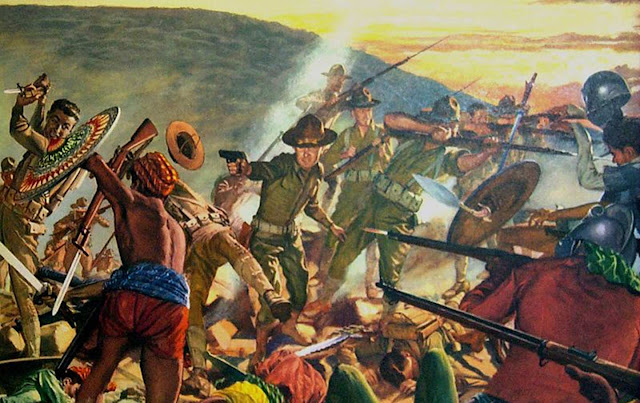 The US military brutally put down various attempts afterward at achieving Philippine independence from America including during the Philippine-American War (1899-1902) in which the US used torture and genocide to maintain its grip over the Southeast Asian nation.

Nothing could have been further from "ensuring other countries have the ability to be sovereign, safe, and secure."

Today, the United States militarily (and illegally) occupies the nations of Afghanistan, Iraq and Syria.


It also carries out deadly drone strikes in Pakistan and Somalia as well as across much of North and Central Africa. The nation of Libya remains destabilised to this day after a US-led war there succeeded in toppling the Libyan government by force. 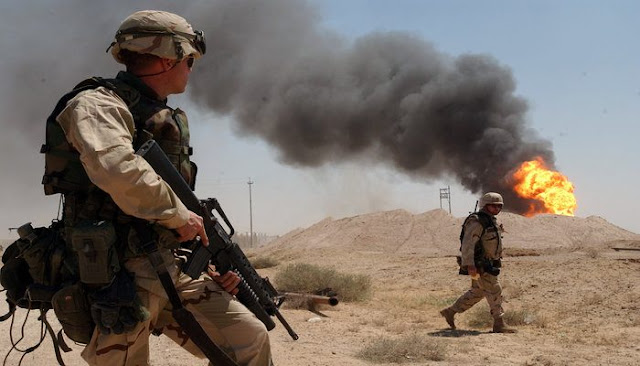 Concurrently the US is openly attempting to overthrow the governments of Iran and Venezuela after having successfully overthrown the government of Ukraine in 2014.

Beyond open invasion, occupation and subversion, the US also maintains a global network of political interference through US government-funded organisations like the National Endowment for Democracy (NED), its subsidiaries the International Republican Institute (IRI) and the National Democratic Institute (NDI) as well as the U.S. Agency for Global Media which maintains US state media operations like Voice of America and Radio Free Asia.

These networks undermine national sovereignty by propping up pro-US opposition groups and even entire political parties during foreign elections in which these groups represent US interests rather than the interests of the nation and people actually holding the elections. Groups funded and/or promoted by these US organisations are also used to pressure and coerce targeted governments regarding US interests.

Rounding off America's full-spectrum war on national sovereignty worldwide is its regular use of economic warfare and more specifically sanctions to coerce friend and foe alike to adopt policies conducive to US interests.

Again, nothing could be further from "ensuring other countries have the ability to be sovereign, safe, and secure" if the largest, most powerful nation on earth hangs invasion, subversion and sanctions over the heads of all if its dictates are not heeded.

US Ambassador DeSombre indulges in an obvious contradiction between his claims over the US role around the globe and more specifically in Asia-Pacific, and what the US is actually doing around the globe.

This includes within Thailand itself where the US government currently funds opposition groups who have recently been carrying out protests aimed at removing the current Thai government from power. This is also not mentioned by the Bangkok Post, not in this most recent article, nor in any other article.

The US Remains Biggest Threat to Asia-Pacific Stability

The Bangkok Post would cite US Ambassador DeSombre who attempted to frame how US policy in the region somehow served Thailand's interests, claiming:


The ambassador said the US is now focusing attention on the South China Sea to make sure that Beijing does not illegally extend its control over the waterway.

"That is an important area for Thailand because Thailand, although not a claimant in the South China Sea, depends upon the freedom of navigation for exports of about 80% of your GDP, so export and import flows through a naval situation that is not free and open would be problematic," he said.

This is a bid to justify continued attempts by Washington to coerce nations like Thailand into taking up a more confrontational stance against China. 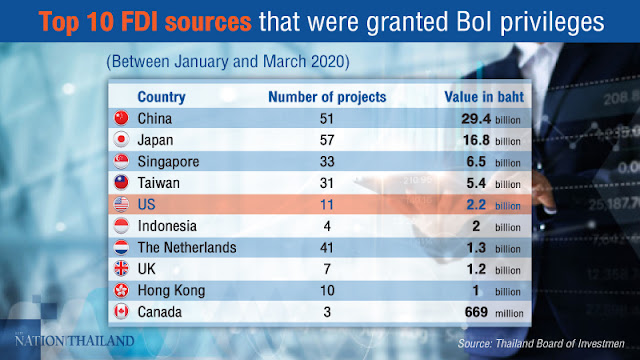 However, in addition to China's massive FDI in Thailand, China is also Thailand's largest trading partner both in terms of imports and exports. China has also boosted Thailand's tourism industry, with over 10 million Chinese tourists visiting Thailand a year, a number larger than that of tourists arriving in Thailand from all other Western nations combined.

There are also plans for purchasing Thailand's first modern submarines from China.

Thailand and China have also begun to conduct joint military exercises inside Thailand, balancing the annual Thai-US "Cobra Gold" drills carried out since the 1980s. 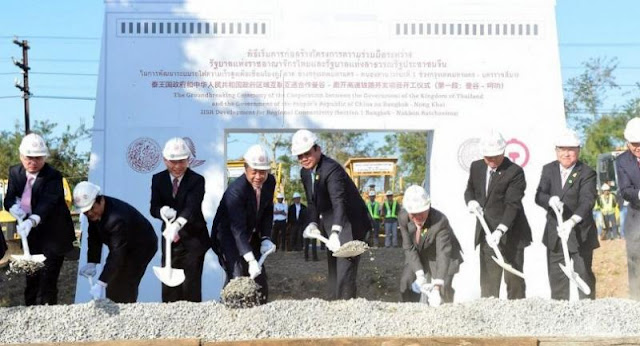 Beyond trade and military ties, Thailand is a key partner of China's Belt and Road Initiative (BRI). A joint Thai-Chinese high speed rail line that will ultimately connect China, Laos, Thailand and Malaysia is already under construction.

Thailand thus has absolutely no reason to "confront" China or worry about China cutting off Thai trade (trade China itself depends on).

Only US posturing and US-led conflict in the region could disrupt Thailand's economic growth.

Already, the US trade war with China has impacted Thai business both domestically and abroad.

It is the above mentioned network of US political interference and media-might that has been mobilised to first put pressure on Thailand for cooperating more closely with China and when that fails, to shame Thailand while excusing and spinning the terrorism and political subversion Washington aids as punishment for doing so.

Thailand's only incentive to heed US Ambassador DeSombre's call for support against China in the South China Sea and elsewhere is to avoid further US interference aimed at Thailand's political and economic stability. But by doing so, Thailand would be walking down a blind alley.

This is why Thailand is likely to continue paying polite lip-service to US demands while patiently weathering various methods of US coercion until US influence in Asia-Pacific is sufficiently declined to where it is no longer a threat to either Thailand or the many nations in Asia-Pacific Thailand primarily does business with.

In the meantime, Thailand will continue building its many and multiplying ties with China while balancing these ties with its ASEAN neighbours as well as more reliable alternatives like Russia.

Thailand would also benefit from cooperating more closely with other targets of US coercion to gradually displace US interference while at the same time encouraging more constructive ties with individual US companies capable of doing business in the region without strings attached.

While the Thai government is too polite and too diplomatic to point out US Ambassador DeSombre's hypocrisy and the true agenda he represents, it is nonetheless important that the public understands what the US is really talking about when it claims it is defending the ability for nations to "be sovereign, safe and secure" in a world otherwise torn apart by the US tramping national sovereignty and triggering crises undermining global safety and security everywhere from South America, North Africa and the Middle East to Central Asia and the South China Sea.

Finally, it is interesting that the US ambassador to Thailand is fixated on a policy that is almost entirely China-centric. The selfishness of US foreign policy even at face value as expressed by US Ambassador Michael DeSombre says all that's left to say about how the US views Thailand. To Washington, Thailand is a mere means to an end, and an end that involves Washington's conflict with Beijing concluding in Washington's favour and at everyone else's (including Thailand's) expense.