October 22, 2020 (Joseph Thomas - NEO) - Even as AFP tried to depict a recent United Nations human rights meeting as a landmark stand against what it claims are human rights abuses by China in its Xinjiang region, its own article points out just how big a failure it really was and how badly Western influence has waned in general.

The AFP's headline read, "Nearly 40 nations demand China respect Uighur human rights," and notes that among those "nearly 40" nations were the US, most EU member states, Australia as well as Japan and a handful of other Western client states.

The US, Japan and many EU nations joined a call on Tuesday urging China to respect the human rights of minority Uighurs, and also expressing concern about the situation in Hong Kong.

"We call on China to respect human rights, particularly the rights of persons belonging to religious and ethnic minorities, especially in Xinjiang and Tibet," said German UN ambassador Christoph Heusgen, who led the initiative during of a meeting on human rights.

The initiative, signed by 39 nations, was countered by another presented by Pakistan singed by 55 nations as well as one presented by Cuba singed by 45 nations. Many of the signatories were very telling in regards to Washington's and its Western-led international order's waning power. 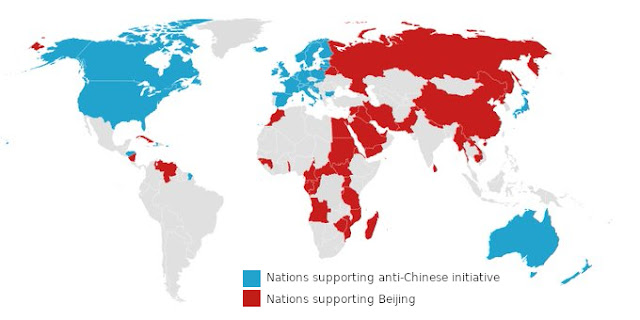 Despite the West's anti-Chinese Xinjiang propaganda campaign focused on the alleged abuses of Xinjiang's Uighur minority who are predominately Muslim, not a single Muslim-majority nation backed the Western initiative at the UN. In fact, many Muslim-majority nations came to China's aid. This includes Pakistan itself, Iran and Syria but also US-occupied Iraq and even Kuwait, Qatar, the UAE and Saudi Arabia.

Even nations with ongoing territorial disputes with China in the South China Sea and a history of tensions, including Vietnam and the Philippines backed Beijing.

India, despite being a member of Washington's anti-Chinese "Quad" project, refrained from signing either statement as did a great number of other key nations carefully trying to reorient themselves as global power shifts from West to East. This includes NATO-member Turkey who has for many decades been a faithful servant of Western hegemony.

Why is No One Interested in the West's Anti-China Crusade?

There are three primary reasons why the majority of the world is not interested in this US-led anti-Chinese propaganda campaign.

First and most importantly, this US-led propaganda campaign is based on fabricated allegations.

As many others have pointed out for years, including the Western media itself at one very early point, China faced a very real terrorism problem in Xinjiang. The current US-led propaganda campaign aimed against China depicts security measures and deradicalisation campaigns as "human rights abuses" while omitting entirely the violence that necessitated them in the first place.

Worse still is documented evidence exposing the fact that the US and its allies were behind efforts to radicalise Uighur extremists in the first place.

All things being equal, nations not invested in or benefiting from Washington's ongoing obsession with encircling and containing China have no reason to endorse a propaganda campaign built on fabricated allegations and resulting from US-sponsored separatism and the terrorism stemming from it.

In fact, by supporting the US campaign against China, they would be supporting interference that could one day eventually be turned on them . The list of nations the US and its partners have already destroyed in the 21st century alone is considerably long and still growing.

Secondly, the US and its Western allies clearly lack the ability to coerce disinterested nations into backing its ongoing anti-Chinese propaganda campaign. A lack of motivation from the world's nations to join and a lack of leverage the US possesses to force them to join led most nations to either openly back China or avoid taking a stance altogether.

Third is owed to China's rise. Its brand of international relations is predicated on economic ties and business rather than military force, political interference or other strategies in the West's "soft power" toolkit.

China's rise also means the rise of many nations doing business with Beijing. Chinese-led infrastructure projects, investments, tourism and trade across the globe are boosting the economies of nations willing to work with China in ways the West is simply unable to compete with.

In order to work with China, these nations must navigate their way around Washington's growing hostility toward China and all the ways it manifests itself, with this "German" led imitative at the UN the latest example.

This latest move at the UN comes at perhaps the "height" of Washington's anti-Chinese Xinjiang propaganda campaign.

With this move demonstrating just how little the rest of the world is interested in it and with the many now exposed lies the campaign itself is built on, it will only lose more momentum as time goes by. With China moving forward with Hong Kong's re-integration with the mainland after putting down US-funded unrest there and likewise displacing US-backed agitators in places like Tibet with economic progress the US is left with inventing new stories to attack China over.

But if the world is not interested in US lies regarding "millions" of Uighurs being detained and abused in China's Xinjiang region, knowing fully what the US is doing and why, there is little chance newly invented lies will have any more appeal or traction in the near future.

As long as China remains committed to its current strategy of bringing economic growth and political stability to the world versus America's belligerence and coercion minus any discernible benefits for prospective partners, this trend of Western credibility shirking alongside its declining political, economic and even military might will continue.

Only when the US and its remaining partners are willing to reorient themselves toward what the world is actually transforming into rather than how they wish the world was, will they (like everyone else) begin to enjoy the full benefits of a new multipolar world where national sovereignty and economic progress underpinned by a more equitable balance of power supplants the West's enduring and destructive pursuit of global hegemony.